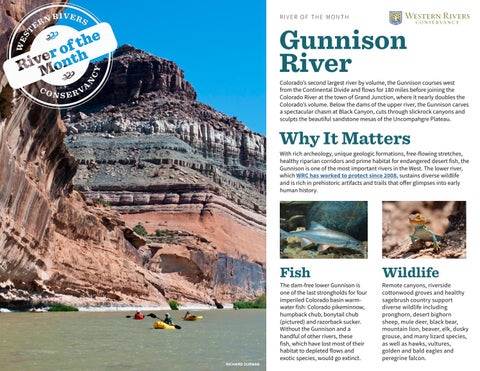 Coloradoâ&#x20AC;&#x2122;s second largest river by volume, the Gunnison courses west from the Continental Divide and flows for 180 miles before joining the Colorado River at the town of Grand Junction, where it nearly doubles the Coloradoâ&#x20AC;&#x2122;s volume. Below the dams of the upper river, the Gunnison carves a spectacular chasm at Black Canyon, cuts through slickrock canyons and sculpts the beautiful sandstone mesas of the Uncompahgre Plateau.

With rich archeology, unique geologic formations, free-flowing stretches, healthy riparian corridors and prime habitat for endangered desert fish, the Gunnison is one of the most important rivers in the West. The lower river, which WRC has worked to protect since 2008, sustains diverse wildlife and is rich in prehistoric artifacts and trails that offer glimpses into early human history.

The dam-free lower Gunnison is one of the last strongholds for four imperiled Colorado basin warmwater fish: Colorado pikeminnow, humpback chub, bonytail chub (pictured) and razorback sucker. Without the Gunnison and a handful of other rivers, these fish, which have lost most of their habitat to depleted flows and exotic species, would go extinct.

Below the extreme rapids of Black Canyon, boaters hike into a scenic Class-III reach in the Gunnison Gorge with plenty of camping (and trophy trout). For a gentler float, put in at Delta and revel in 44 miles of the river’s wild lower canyon—one of the finest canoe-camping trips around.

See more of Black Canyon on routes like the North Vista Trail. Some hike to the bottom of Black Canyon (a treacherous pursuit) via the Gunnison Route. Downstream, Big Dominguez Canyon and Escalante Canyon feature swimming holes, ancient rock art and bighorn sheep clamoring across the red cliffs above.

“The Gunny” is one of the West’s most prized trout streams, especially the Gold-Medal-designated stretches from Black Canyon through the Gunnison Gorge. Here you’ll find huge browns, rainbows, cutbows and cutthroats in a spectacular, hard-to-reach setting. In August, a bright run of Kokanee moves up from Blue Mesa Reservoir. Check regulations.

View the startling depths of Black Canyon via South Rim Road (closed Nov-Apr), a seven-mile drive with 12 overlooks, including Painted Wall, Colorado’s tallest cliff. You’ll find a visitor’s center and lots of short trails, so bring a picnic and make a day of it.

THE WRC STORY The Gunnison’s free-flowing lower reaches are largely protected within the Dominguez-Escalante National Conservation Area (DENCA) and Bangs Canyon Special Recreation Management Area. But significant stretches of sensitive riverfront remain unprotected within the DENCA. Since 2008, WRC has been working to buy and conserve those riverlands along the river and transfer them to the BLM for permanent conservation within the DENCA. To date, we have protected over three miles of riverfront, improved access to the river and prevented what could have been a disastrous gravel mine on the banks of the Gunnison. Upstream, above Black Canyon, we purchased a farm with senior water rights on the Little Cimarron River, a key tributary to the Cimarron and Gunnison. A stretch of the “Little Cim” often ran bone-dry in late summer, drawn down to the rock for irrigation. After buying the farm, we partnered with Colorado Water Trust and created the state’s first permanent water-sharing agreement between ag and the environment, successfully ensuring year-round flows in this critical stream.

River of the Month - Gunnison River

River of the Month - Gunnison River