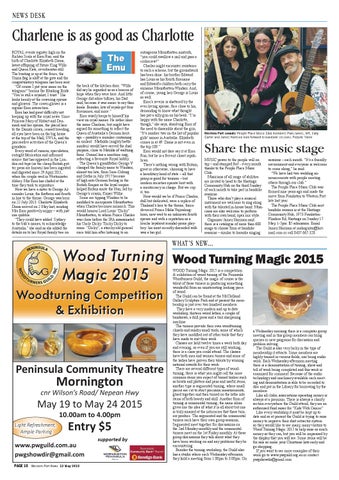 Charlene is as good as Charlotte ROYAL events register high on the Richter Scale at Emu Ruo, and the birth of Charlotte Elizabeth Diana, latest offspring of future King Wills and Queen Kate, reverberates still. The bunting is up at the fence, the Union flag is aloft at the gate and the congratulatory telegram has been sent. “Of course I put your name on the telegram!” booms the Blushing Bride. “You’re still a royalist, I trust.” She looks keenly at the cowering spouse and glowers. The cower-glower is a regular Emu interaction. Emu has had great difficulty not keeping up with the royal news. Since Princess Mary of Hobart and Denmark and her spouse, the placid heir to the Danish crown, ceased breeding, all eyes have been on the big house at the top of the Mall, SW1A, and the procreative activities of the Queen’s grandson. Every word of rumour, speculation, outright fabrication and informed source that has appeared in the London red tops (as the cheap British gutter press are known) has been ingested and digested since 29 April 2011, when the couple wed in Westminster Abbey. Mrs Emu has chafed at the time they took to reproduce. Now we have a sister to George Alexander Louis, the firstborn and fourth in line to the throne. George was born on 22 July 2013. Charlotte Elizabeth Diana arrived on 2 May last, sending Mrs Emu positively soppy – with just one quibble. “They could have added Sydney to the bub’s names, to acknowledge Australia,” she said as she added the details on to her Royal family tree on

the back of the kitchen door. “Wills did say he regarded us as a beacon of hope when they were here. And little George did adore bilbies, his Dad said, because it was easier to say than koala. Besides, lots of royals get four forenames, and more.” Emu wisely keeps to himself his view on royal names. He rather likes the name Charlene, but might have argued for something to reflect the Queen of Australia’s German heritage – possibly a moniker containing an umlaut. Mathilda (mighty battle maiden) would have served the dual purpose, close to Matilda of waltzing fame. Gunnel has a maritime ring, reflecting a favourite Royal hobby. The Queen’s grandfather George V changed the family name to Windsor, almost too late, from Saxe-Coburg and Gotha in July 1917 because of high anti-German feeling in the British Empire as the loyal empire helped Britain smite the Hun, led by George&#39;s cousin, Kaiser Willie. Some are tipping Windsor to be modified to incorporate Mountbatten when Charles becomes monarch. This would honour Lord Louis “Dicky” Mountbatten, to whom Prince Charles was close before the IRA assassinated his Uncle Dicky. Tricky Dicky to some. “Dicky”, a starchy old general once told him after listening to an

outrageous Mountbatten mistruth, “you could swallow a nail and pass a corkscrew!” Charles might encounter resistance to such a scheme, but the groundwork has been done: his brother Edward has Louis as his fourth forename and Edward&#39;s children both carry the surname Mountbatten-Windsor. And, of course, young heir George is Louis as well. Emu’s reverie is shattered by the ever-loving spouse, face close to his, demanding to know what thought has put a silly grin on his beak. “I’m happy with the name Charlotte, though,” she says, absolving Emu of the need to dissemble about the grin. “It’s number two on the list of popular girls’ names in Australia. Elizabeth comes in at 49. Diana is not even in the top 100.” Emu would not dare say it at Emu Ruo, but he is a fervent closet republican. There’s nothing wrong with Britain, great or otherwise, choosing to have a hereditary head of state – all that pomp is good for tourism – but modern societies operate best with a meritocracy in charge. But we cop it, too. How would we be if Prince Charles, dull but dedicated, were a replica of Thailand’s heir to the throne, thrice divorced Prince Maha Vajiralongkorn, now wed to an unknown fourth spouse and with a reputation as a louche layabout scandal-prone playboy: his most recently discarded wife was a bar girl.

Share the music stage MUSIC power to the people will on tap – and stamped feet - every month thanks to the People Place Music Club. Musicians of all range of abilities are invited to head to the Hastings Community Hub on the third Sunday of each month to take part in bandoke sessions. Those who don’t play a musical instrument are welcome to sing along with the talented in-house band. Musicians are also welcome to perform with their own band, open mic style. Organiser Jamez Harrison said there is a catalogue of more than 600 songs to choose from at bandoke sessions – similar to karaoke singing

sessions – each month. “It’s a friendly environment and everyone is welcome to come along,” he said. “We have had two wedding announcements with people meeting others through our club.” The People Place Music Club was formed nine years ago and made the move from Frankston to Western Port late last year. The People Place Music Club next bandoke session is at the Hastings Community Hub, 1973 FrankstonFlinders Rd, Hastings on Sunday 17 May, 1-5pm. $5 admission. Email Jamez Harrison at mahoguitar@hotmail.com or call 0437 665 328.

Wood Turning Magic 2015 WOOD Turning Magic 2015 is a competition &amp; exhibition of wood turning of the Peninsula Woodturners Guild; the magic of course is the talent of these turners in producing something wonderful from an uninteresting looking piece of wood. The Guild can be found at the McClelland Gallery Sculpture Park and at present the membership is just over two hundred members. They have a very modern and up to date workshop, thirteen wood lathes, a couple of bandsaws, a drill press and a tool sharpening machine. The turners provide their own woodturning chisels and sundry small tools, some of which they have modified out of other tools that they have made to suit their work. Classes are held twelve times a week both day and evening, so even if you are still working, there is a class you could attend. The classes have both men and women turners and some of the ladies have proven their talents by winning national awards for their work. There are several different types of woodturning, there is what you might call the more common items you expect of turned timber such as bowls and platters and pens and useful items, another type is segmented turning, where small pieces are cut to strict precision measurements, glued together and then turned on the lathe into items of both beauty and skill. Another form of turning is ornamental turning; the name alone gives one the idea of what it is all about but one is truly amazed at the intricacies that these turners produce. The segmented and the ornamental turners each have their own group sessions, Segmented meet together for discussions on the 2nd Monday monthly and the ornamental turners meet on the 1st Friday monthly. At these group discussions they talk about what they have been working on and any problems they be encountering. Besides the turning workshop, the Guild also has a studio where each Wednesday afternoon they hold a meeting from 1.00pm to 3.00pm. On

a Wednesday morning there is a computer group meeting and in this group members can bring queries or new programs for discussion and problem solving. The Guild is also very lucky in the type of membership it attracts. Some members are highly trained in various fields, one being audio work. Each Wednesday afternoon meeting there is a demonstration of turning, show and tell of work being completed and this work is examined for comment. Because of the audio technology and machinery available each meeting and demonstration is able to be recorded to disc and put in the Library for borrowing by the members. Like all clubs, associations operating money is always at a premium. There is always a charity section everywhere the Guild attend, they are an authorised fund raiser for “Kids With Cancer” Like every workshop it must be kept up to date and so at present the Guild is trying to raise money to improve their dust extractor system so they would like to see many, many visitors to Wood Turning Magic 2015 to help raise as much money as they can, but you will be impressed by the display that you will see. Some items will be for sale so make your Christmas lists early and go shopping. If you want to see more examples of their work go to www.pwguild.org.au or contact pwgshowdir@gmail.com