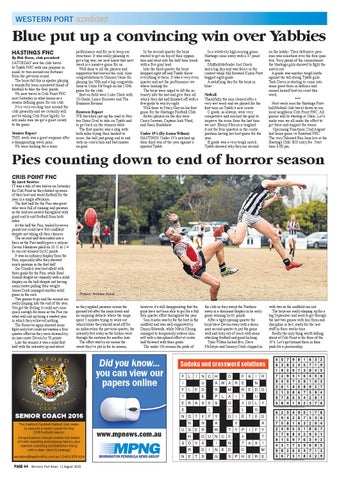 Blue put up a convincing win over Yabbies HASTINGS FNC

performance and for us to keep our structures. It was really pleasing to get a big win; we now know that next week is a massive game for us. Well done to all the players and supporters that braved the cold. Also congratulations to Damien Stone for playing his 50th and a big congratulations to Colin McVeigh on his 150th game for the club. Best on field were Luke Clark with 10 Goals, Lance Brouwer and The Business Biviano.

By Phil Stone, club president SATURDAY saw the club travel to Tyabb FNC with one purpose in mind; to turn around our fortunes from the previous round. The boys did this in spades playing a wonderful team orientated brand of football to take the four points. We now travel to Crib Point FNC next Saturday in what looms as a season defining game for our club. It’s a very exciting time around the club presently and we certainly will not be taking Crib Point lightly. So lets make sure we get a great crowd to the game.

Reserves Report WE travelled just up the road to Norton Gates Oval to take on Tyabb and to get back on the winners table. The first quarter was a slog with both sides trying their hardest to score; the ball just going end to end with no conviction and bad misses on goal.

Seniors Report THIS week was a great response after a disappointing week prior. We were looking for a team

In the second quarter the boys started to get on top of their opposition and went into the half-time break with a five goal lead. Into the third quarter the boys dropped right off and Tyabb threw everything at them. It was a very even quarter and not the performance we where looking for. The boys were urged to lift the intensity into the last and give their all which they did and finished off with a few goals to win by eight. Well done to Stuey Gay on his first game for the Hastings Football Club. Better players on the day were Carey Sawosz, Captain Josh Ward, and Jason Bradshaw. Under 19’s (By Aaron Wilson) HASTINGS Under 19’s notched up their third win of the year against a spirited Tyabb.

In a relatively high scoring game, Hastings came away with a 37 point win. Midfield/defender Joel Goetz had a big day and was fierce in the contest while full forward Kyron Pratt bagged eight goals. A satisfying day for the boys in blue! Netball Thankfully the rain cleared after a very wet week and we played for the first time on Tyabb’s new courts. C grade, as always, were very competitive and reached the goal to improve the score from the last time we met. Ebony Mercieca toughed it out for four quarters in the centre position having her best game for the year. B grade was a very tough match. Tyabb showed why they are second

on the ladder. Their defensive pressure was relentless over the four quarters. Very proud of the commitment the Hastings girls showed to fight the match out. A grade was another tough battle against the tall strong Tyabb girls. Tash Green is starting to come into some great form in defence and earned herself best on court this week. *** Next week sees the Hastings Football/Netball club travel down to our local neighbour Crib Point FNC. All games will be starting at 10am. Let’s make sure we all make the effort to get there and support the teams. Upcoming Functions 22nd August last home game vs Rosebud FNC. The very Talented Ben Janz live at the Hastings Club. $10 entry fee. Start time 8.00 pm.

By Jared Newton IT was a tale of two halves on Saturday for Crib Point as they dished up some of their best and worst football for the year in a single afternoon. The first half for the Pies was great who were full of running and pressure as the lead see-sawed throughout with good end to end football from both sides. At the half the Pies, trailed by seven points but could have felt confident despite not taking all their chances. The second half descended into a farce as the Pies hardly gave a yelp as Devon Meadows piled on 10.11 to 2.4 to run out winners by 62 points. It was an ordinary display from the Pies, especially after they showed much promise in the first half. Zac Condick was best afield with three goals for the Pies, while Brad Arnold fought on valiantly with a solid display on the ball despite not having many mates pulling their weight. James Cook managed another solid game in the ruck. Two games to go and the seniors are really limping into the end of the year. You get the feeling it could not come quick enough for some as the Pies rue what will end up being a wasted year in which they achieved nothing. The Reserves again showed some fight early but could not sustain a four quarter effort as they were downed by an inaccurate Devon by 76 points. Like the seniors it was a solid first half with the intensity up and about

Picture: Andrew Hurst as they applied pressure across the ground but after the main break and an umpiring debacle where the umps spent 5 minutes trying to work out which bloke they should send off for an indiscretion the previous quarter, the intensity feel away as the blokes went through the motions for another loss. The effort was by no means the worst they’ve put in for he season,

Did you know... you can view our papers online L

however it’s still disappointing that the guys have not been able to gel for a full four quarter effort throughout the year. Sam Austin was by far the best in the midfield and was well supported by Danny Edwards, while Mitch Kleinig managed to temporarily redeem himself with a disciplined effort at centre half forward with three goals. The under 19s remain the pride of

SENIOR COACH 2016 The Seaford Football Netball club seeks to appoint a senior coach for the 2016 football season. All applications should contain full details of both coaching and playing history, plus relevant coaching accreditation along with a clear vision & strategy. secretary@seafordfnc.com.au | 0402 679 954

the club as they swept the Panthers away in a dominant display in he early game winning by 61 points. After a tight opening quarter the boys blew Devon away with a dominant second quarter to put the game well and truly out of reach with some attacking football and good kicking. Tyler Wilton kicked five, Dave McIntyre and Sammy Cook chipped in

with two as the midfield ran riot. The boys are really shaping up for a big September and need to get through the last two games with heir form and discipline in tact, ready for the real stuff in three weeks time. Really the only thing worth talking about at Crib Point is the form of the 19’s. Let’s get behind them in their push for a premiership.