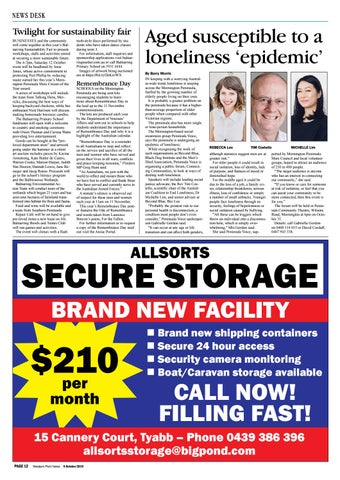 Twilight for sustainability fair BUSINESSES and the community will come together at this year’s Balnarring Sustainability Fair to present workshops, stalls and activities aimed at securing a more sustainable future. The 4-7pm, Saturday 12 October event will be headlined by Josie Jones, whose active commitment to protecting Port Phillip by reducing waste earned her this year’s Mornington Peninsula Shire Citizen of the Year award. A series of workshops will include the team from Talking Hens, Merricks, discussing the best ways of keeping backyard chickens, while bee enthusiast Nick Harrison will discuss making homemade beeswax candles. The Balnarring Primary School fundraiser will open with a welcome to country and smoking ceremony with Owen Thomas and Carissa Watts providing live entertainment. Goods can be bought at the “preloved department store” and artwork going under the hammer at a silent art auction includes pieces by Karina Armstrong, Kate Butler de Castro, Warren Cooke, Marion Harper, Judith Van Heeren, Hannah Lewis, Jane Reiseger and Jacqi Russo. Proceeds will go to the school’s literacy program and the Balbirooroo Wetlands. Balnarring Environmental Action Team will conduct tours of the wetlands which began 25 years and has seen nine hectares of farmland transformed into habitat for flora and fauna. Food and wine will be available and a team from Southern Peninsula Repair Cafe will be on hand to give pre-loved items a new lease on life. Balnarring Bowls and Tennis Club will run games and activities. The event will climax with a flash

mob-style disco performed by students who have taken dance classes during term 3. For information, stall inquiries and sponsorship applications visit balnarringsusfair.com.au or call Balnarring Primary School on 5931 4444. Images of artwork being auctioned are at https://bit.ly/2kKsvWX

SCHOOLS on the Mornington Peninsula are being sent kits encouraging students to learn more about Remembrance Day in the lead up to the 11 November commemorations. The kits are produced each year by the Department of Veterans’ Affairs and sent out to schools to help students understand the importance of Remembrance Day and why it is a highlight of the Australian calendar. “Remembrance Day is a reminder to all Australians to stop and reflect on the service and sacrifice of all the men and women who have served and given their lives in all wars, conflicts and peace keeping missions,” Flinders MP Greg Hunt said. “As Australians, we join with the world to reflect and mourn those who we have lost to conflict and thank those who have served and currently serve in the Australian Armed Forces.” A minute’s silence is observed out of respect for these men and women each year at 11am on 11 November. This year’s Remembrance Day poster features the Ode of Remembrance and words taken from Laurence Binyon’s poem, For the Fallen. For further information or to request a copy of the Remembrance Day mail out visit the Anzac Portal.

Aged susceptible to a loneliness ‘epidemic’ By Barry Morris IN keeping with a worrying Australia-wide trend, loneliness is seeping across the Mornington Peninsula, fuelled by the growing number of elderly people living on their own. It is probably a greater problem on the peninsula because it has a higherthan-average proportion of older people when compared with other Victorian regions. The peninsula also has more single or lone-person households. The Mornington-based social awareness group Peninsula Voice, says the peninsula is undergoing an epidemic of loneliness. While recognising the work of such organisations as Beyond Blue, Black Dog Institute and the Men’s Shed Association, Peninsula Voice is organising a public forum, Connecting Communities, to look at ways of dealing with loneliness. Speakers will include leading social justice advocate, the Rev Tim Costello, scientific chair of the Australian Coalition to End Loneliness, Dr Michelle Lim, and senior adviser at Beyond Blue, Bec Lee. “Probably the greatest risk to our personal health is disconnection, a condition most people don’t even consider,” Peninsula Voice spokesperson Gabrielle Gordon said. “It can occur at any age or life transition and can affect both genders,

although statistics suggest men are at greater risk.” For older people it could result in social isolation, loss of identity, lack of purpose, and flatness of mood or diminished hope. For the middle aged it could be due to the loss of a job, a family crisis, relationship breakdown, serious illness, loss of confidence or simply a number of small setbacks. Younger people face loneliness through insecurity, feelings of hopelessness or social isolation caused by bullying. “All these can be triggers which throw an individual into a disconnection hole, which is simply overwhelming,” Mrs Gordon said. She said Peninsula Voice, sup-

ported by Mornington Peninsula Shire Council and local volunteer groups, hoped to attract an audience of 250 to 400 people. “The target audience is anyone who has an interest in connecting our community,” she said. “If you know or care for someone at risk of isolation, or feel that you can assist your community to be more connected, then this event is for you.” The forum will be held in Peninsula Community Theatre, Wilsons Road, Mornington at 6pm on October 31. Details: call Gabrielle Gordon on 0400 114 015 or David Corduff, 0407 945 558.