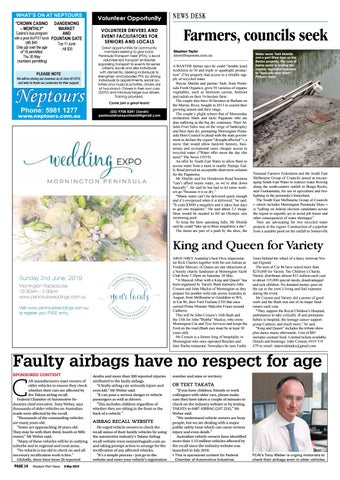 MARKET Casino’s bus program AND with a great BUFFET lunch FOUNTAIN GATE (all) $40. Only p/p over the age of 18 permitted. Thu 30 May (numbers permitting)

We will be closing our business as of June 30 2019, and wish to thank our customers for their support.

Farmers, councils seek Stephen Taylor steve@mpnews.com.au A BAXTER farmer says he could “double [our] workforce to 50 and triple or quadruple production” if his property had access to a reliable supply of recycled water. Wayne Shields and partner Tash, from Peninsula Fresh Organics, grow 50 varieties of organic vegetables, such as heirloom carrots, beetroot and radish on their 16-hectare farm. The couple also have 40 hectares at Barham on the Murray River, bought in 2013 to extend their growing season and their range. The couple’s plight echoes that of Moorooduc orchardists Mark and Jacki Paganoni who are also suffering as the big dry continues. Their Atlanta Fruit Sales was on the verge of bankruptcy and their dam dry prompting Mornington Peninsula Shire Council to plead with the state government to declare the region “drought-affected” – a move that would allow hard-hit farmers, businesses and recreational users cheaper access to recycled water. (“Water offer saves the day (for now)” The News 1/5/19). An offer by South East Water to allow them to access water from a main in nearby Stumpy Gully Road proved an acceptable short-term solution for the Paganonis. Mr Shields said his Henderson Road business “can’t afford mains water, so we’re shut down basically”. He said he has had to let some workers go “because it is so dry.” “Mains water can’t be delivered quick enough and it’s overpriced when it is delivered,” he said. “It costs $3000 a megalitre and it takes four days to get one megalitre.” He said about 2.5 megalitres would be needed to fill an Olympic size swimming pool. To keep the farm operating fully, Mr Shields said he could “take up to three megalitres a day”. The farms are part of a push by the shire, the

Water woes: Tash Shields and a part filled dam on her Baxter property. The cost of mains water is forcing the organic vegetable business to “basically shut down”. Picture: Yanni

National Farmers Federation and the South East Melbourne Group of Councils aimed at encouraging South East Water to redirect water flowing along the south-eastern outfall to Boags Rocks, near Gunnamatta, for use in agriculture and firefighting in the peninsula’s hinterland. The South East Melbourne Group of Councils – which includes Mornington Peninsula Shire – is “calling on federal election candidates across the region to urgently act to avoid job losses and other consequences of water shortages”. They are advocating for two recycled water projects in the region: Construction of a pipeline from a suitable point on the outfall to Somerville

King and Queen for Variety ARGUABLY Australia’s best Elvis impersonator Rick Charles together with his son Adrian as Freddie Mercury of Queen are star attractions at a Variety charity fundraiser at Mornington Yacht Club from 7.30pm on Saturday 18 May. “A Musical Affair with a King and Queen” has been organised by Variety Bash stalwarts John Crossin and John Mackie of Mornington as they prepare for another wild ride across Australia in August, from Melbourne to Geraldton in WA, in Car 86, their Ford Fairlane LTD that once carried Prime Minister Malcolm Fraser around Canberra. This will be John Crossin’s 16th Bash and the 15th for John “Bubba” Mackie, who owns Mornington Car and Tyre Services and keeps the Ford on the road (Bash cars must be at least 30 years old). Mr Crossin is a former king of hospitality in Mornington who once operated Beaches and later Harba restaurant. Nowadays he runs Faulty

Tours behind the wheel of a fancy minivan Nissan Elgrand. The men of Car 86 have raised more than $250,000 for Variety The Children’s Charity. Variety distributes almost $12 million each year to about 135,000 special needs, disadvantaged and sick children. No donated money goes on the car or the crew’s living and fuel expenses during the event. Mr Crossin said Variety did a power of good work and the Bash was one of its major fundraisers each year. “They support the Royal Children’s Hospital, ambulances to take critically ill and premature babies to hospital, the teenage cancer support group Canteen, and much more,” he said. “King and Queen” includes the tribute show plus dance music afterwards. Cost of $85 includes cocktail food. Limited tickets available. Details and bookings: John Crossin, 0419 319 479 or email: statewidetanks@gmail.com

Faulty airbags have no respect for age SPONSORED CONTENT AR manufacturers want owners of older vehicles to ensure they check whether their cars are affected by the Takata airbag recall. Federal Chamber of Automotive Industries chief executive, Tony Weber, says thousands of older vehicles on Australian roads were affected by the recall. &quot;Thousands of the outstanding vehicles are many years old. &quot;Some are approaching 20 years old. They may be with their third, fourth or fifth owner,&quot; Mr Weber said. &quot;Many of these vehicles will be in outlying suburbs and in regional and rural areas. &quot;No vehicle is too old to check on and all necessary rectification work is free.&quot; Globally, there have been 26 reported

deaths and more than 300 reported injuries attributed to the faulty airbags. &quot;A faulty airbag can seriously injure and even kill,&quot; Mr Weber said. &quot;It can pose a serious danger to vehicle passengers as well as drivers. &quot;This includes children regardless of whether they are sitting in the front or the back of a vehicle.&quot;

AIRBAG RECALL WEBSITE He urged vehicle owners to check the recall status of their family vehicles by using the automotive industry&#39;s Takata Airbag recall website www.ismyairbagsafe.com.au and taking prompt action to arrange for the rectification of any affected vehicles. &quot;It&#39;s a simple process - just go to the website and enter your vehicle&#39;s registration

number and state or territory.

OR TEXT TAKATA &quot;If you have children, friends or work colleagues with older cars, please make sure they have taken a couple of minutes to check on the industry website or by texting TAKATA to 0487 AIRBAG (247 224),&quot; Mr Weber said. &quot;We understand vehicle owners are busy people, but we are dealing with a major public safety issue which can cause serious injury and even death.&quot; Australian vehicle owners have identified more than 1.15 million vehicles affected by the recall since the industry website was launched in July 2018. ■ This is sponsored content for Federal Chamber of Automotive Industries.

FCAI&#39;s Tony Weber is urging motorists to check their airbags even in older vehicles.