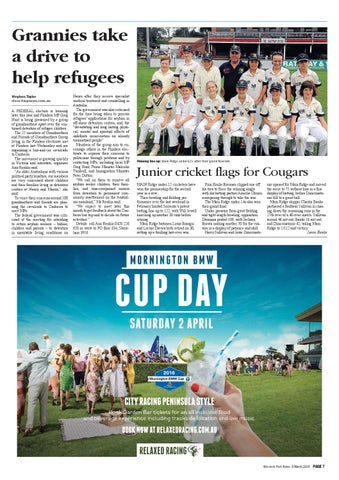 Grannies take a drive to help refugees Stephen Taylor steve@mpnews.com.au A FEDERAL election is looming later this year and Flinders MP Greg Hunt is being pressured by a group of grandmothers upset over the continued detention of refugee children. The 25 members of Grandmothers and Friends of Grandmothers Group living in the Flinders electorate met at Flinders last Wednesday and are organising a bus-and-car cavalcade to Canberra. The movement is growing quickly in Victoria and interstate, organiser Ann Renkin said. “As older Australians with various political party loyalties, our members are very concerned about children and their families living in detention centres at Nauru and Manus,” she said. To voice their concerns around 100 grandmothers and friends are planning the cavalcade to Canberra to meet MPs. The federal government was criticised at the meeting for intending to return asylum seekers – babies, children and parents – to detention in unsuitable living conditions on

Nauru after they receive specialist medical treatment and counselling in Australia. The government was also criticised for the time being taken to process refugees’ applications for asylum in off-shore detention centres, and, the “devastating and long lasting physical, mental and spiritual effects of indefinite incarceration on already traumatised people”. Members of the group aim to encourage others in the Flinders electorate to express their concerns to politicians through petitions and by contacting MPs, including local MP Greg Hunt, Prime Minister Malcolm Turnbull, and Immigration Minister Peter Dutton. “We call on them to remove all asylum seeker children, their families, and unaccompanied minors from detention to permanent community resettlement on the Australian mainland,” Ms Renkin said. “We expect to meet later this month to get feedback about the Canberra bus trip and to decide on future activities.” Details: call Ann Renkin 0428 226 650 or write to PO Box 334, Shoreham 3916.

Junior cricket flags for Cougars MAIN Ridge under-12 cricketers have won the premiership for the second year in a row. Their bowling and fielding performance over the last weekend in February limited Sorrento’s potent batting line-up to 122, with Will Jewell knocking up another 30 runs before retiring. Main Ridge batsmen Louis Bisogni and Lochie Davies both retired on 30, setting up a thrilling last-over win.

Finn Emile-Brennan clipped one off his toes to force the winning single with his batting partner Amerlie Obrien scampering through to take the win. The Main Ridge under-14s also won their grand final. Under pressure from great fielding and tight-length bowling, opposition Dromana posted 109, with Jackson Brown making another 50 for the visitors in a display of patience and skill. Harry Sullivan and Jesse Diniconato-

nio opened for Main Ridge and moved the score to 75 without loss in a fine display of batting, before Diniconatonio fell to a great ball. Main Ridge skipper Charlie Banks partnered a faultless Sullivan in chasing down the remaining runs in the 27th over of a 40-over match. Sullivan scored 46 not out, Banks 16 not out, and Diniconatonio 42, taking Main Ridge to 1/112 and victory. Jason Banks