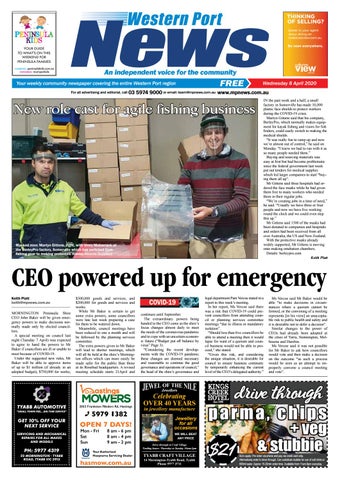 IN the past week and a half, a small factory in Somerville has made 10,000 plastic face shields to protect workers during the COVID-19 crisis. Martyn Gittens said that his company, BerleyPro, which normally makes equipment for kayak fishing and visors for fish finders, could easily switch to making the medical shields. “It was really fun to ramp up and now we’re almost out of control,” he said on Monday. “I knew we had to run with it as so many people needed them.” Buying and sourcing materials was easy at first but had become problematic since the federal government last week put out tenders for medical supplies which led larger companies to start “buying them all up”. Mr Gittens said three hospitals had ordered the face masks while he had given them free to many workers who needed them in their regular jobs. “We’re creating jobs in a time of need,” he said. “Usually we have three or four people and now we have five working round the clock and we could even step this up.” Mr Gittens said 1500 of the masks had been donated to companies and hospitals and orders had been received from all over Australia, the US and New Zealand. With the protective masks already widely supported, Mr Gittens is moving onto making intubation chambers. Details: berleypro.com Keith Platt

CEO powered up for emergency Keith Platt keith@mpnews.com.au MORNINGTON Peninsula Shire CEO John Baker will be given emergency powers to make decisions normally made only by elected councillors. A special meeting on council last night (Tuesday 7 April) was expected to agree to hand the powers to Mr Baker if councillors are ill or unable to meet because of COVID-19. Under the suggested new rules, Mr Baker will be able to approve items of up to $1 million (if already in an adopted budget); $750,000 for works;

$500,000 goods and services; and $200,000 for goods and services and works. While Mr Baker is certain to get some extra powers, some councillors were late last week preparing a case for them to be watered down. Meanwhile, council meetings have been reduced to one a month and will be followed by the planning services committee. The extra powers given to Mr Baker will lead to shorter meetings, which will all be held at the shire’s Mornington offices which can more easily be made safer for the public than those at its Rosebud headquarters. A revised meeting schedule starts 21April and

continues until September. The extraordinary powers being handed to the CEO come as the shire’s focus changes almost daily to meet the needs of the coronavirus pandemic and to cope with an uncertain economic future (“Budget put off balance by virus” Page 3). “Considering the recent developments with the COVID-19 pandemic these changes are deemed necessary and reasonable to continue the good governance and operations of council,” the head of the shire’s governance and

legal department Pam Vercoe stated in a report to this week’s meeting. In her report, Ms Vercoe said there was a risk that COVID-19 could prevent councillors from attending council or planning services committee meetings “due to illness or mandatory isolation”. “Should less than five councillors be able to attend a meeting then it would lapse for want of a quorum and council business would not be able to proceed,” she stated. “Given this risk, and considering the unique situation, it is desirable for council to ensure business continuity by temporarily enhancing the current level of the CEO’s delegated authority.”

Ms Vercoe said Mr Baker would be able “to make decisions in circumstances where a quorum cannot be formed, or the convening of a meeting represents [in his view] an unacceptable risk to public health and safety and it is desirable not to defer a decision”. Similar changes to the power of CEOs had already been adopted at the cities of Yarra, Stonnington, Melbourne and Darebin. Ms Vercoe said it was not possible for Mr Baker to ask how councillors would vote and then make a decision on the outcome “as such a process would be seen as an attempt to improperly convene a council meeting and vote”.

GET 10% OFF YOUR NEXT SERVICE

SERVICING AND MECHANICAL REPAIRS FOR ALL MAKES AND MODELS

WE WILL BEAT ANY PRICE

t&c’s apply: Pre order via phone and pay via credit card only. Alternatively order in drive through. Can substitute stubbie for can of soft drink or 600ml water. Approx 15-20min order time. Available from 11am-9pm everyday.