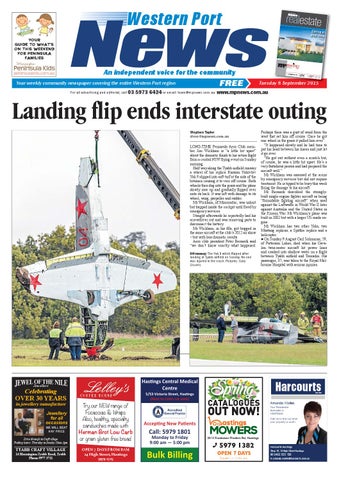 Spring in your step > Page 3

Landing flip ends interstate outing Stephen Taylor steve@mpnews.com.au LONG-TIME Peninsula Aero Club member Jim Wickham is “a little bit upset” about the dramatic finish to his return flight from a central NSW flying event on Sunday morning. Half way along the Tyabb airfield runway a wheel of his replica Russian Yakovlev Yak 9 slipped into soft turf at the side of the bitumen causing it to veer off course. Both wheels then dug into the grass and the plane slowly rose up and gradually flipped over onto its back. It was left with damage to its wheel, wing, propeller and rudder. Mr Wickham, of Moorooduc, was unhurt but trapped inside the cockpit until freed by emergency services. Straight afterwards he reportedly had his screwdriver out and was removing parts to disconnect the battery. Mr Wickham, in his 60s, got bogged in the same aircraft at the club’s 2012 air show – but with less dramatic results. Aero club president Peter Bernardi said “we don’t know exactly what happened. Off runway: The Yak 9 which flipped after landing at Tyabb airfield on Sunday. No one was injured in the crash. Pictures: Gary Sissons

Perhaps there was a gust of wind from the west that set him off course. Once he got one wheel in the grass it pulled him over”. “It happened slowly and he had time to put his head between his knees and just let it go over. “He got out without even a scratch but, of course, he was a little bit upset. He’s a very fastidious person and had prepared the aircraft well.” Mr Wickham was assessed at the scene by emergency services but did not require treatment. He is tipped to be busy this week fixing the damage to his aircraft. Mr Bernardi described the stronglybuilt single-engine fighter aircraft as being “formidable fighting aircraft” when used against the Luftwaffe in World War II later against Australia and the United States in the Korean War. Mr Wickham’s plane was built in 2002 but with a larger US-made engine. Mr Wickham has two other Yaks, two Mustang replicas, a Spitfire replica and a helicopter.  On Sunday 9 August Carl Solomons, 59, of Patterson Lakes, died when his Cavalon twin-seater aircraft hit power lines and crashed into shallow water on a flight between Tyabb airfield and Tooradin. His passenger, 37, was taken to the Royal Melbourne Hospital with serious injuries.