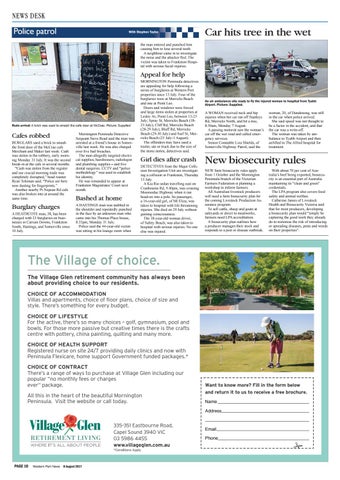 Car hits tree in the wet

the man entered and punched him causing him to lose several teeth. A neighbour came in to investigate the noise and the attacker fled. The victim was taken to Frankston Hospital with serious facial injuries.

Rude arrival: A brick was used to smash the cafe door at McCrae. Picture: Supplied

Cafes robbed BURGLARS used a brick to smash the front door of the McCrae cafe Merchant and Maker last week. Cash was stolen in the robbery, early morning Monday 31 July. It was the second break-in at the cafe in several months. “Cash was stolen from the register and our crucial morning trade was completely disrupted,” head roaster Ryan Toleman said. “Police are here now dusting for fingerprints.” Another nearby Pt Nepean Rd cafe was also broken into at around the same time.

Burglary charges A HEATHCOTE man, 38, has been charged with 23 burglaries on businesses in Carrum Downs, Frankston South, Hastings, and Somerville since 10 July.

Mornington Peninsula Detective Sergeant Steve Read said the man was arrested at a friend’s house in Somerville last week. He was also charged over five bail breaches. The man allegedly targeted electrical supplies, hairdressers, radiologist and plumbing supplies – and five dental surgeries. CCTV and “police methodology” was used to establish his identity. He was remanded to appear at Frankston Magistrates’ Court next month.

Bashed at home A HASTINGS man was stabbed in the shoulder and repeatedly punched in the face by an unknown man who came into his Thomas Place house, 8.35pm, Monday 31 July. Police said the 44-year-old victim was sitting in his lounge room when

Girl dies after crash DETECTIVES from the Major Collision Investigation Unit are investigating a collision in Frankston, Thursday 13 July. A Kia Rio sedan travelling east on Cranbourne Rd, 9.40pm, was crossing Moorooduc Highway when it ran head-on into a pole. Its passenger, a 16-year-old girl, of Mt Eliza, was taken to hospital with life threatening injuries. She died on 29 July without gaining consciousness. The 18-year-old woman driver, of Safety Beach, was also taken to hospital with serious injuries. No one else was injured.

A WOMAN received neck and hip injuries when her car ran off Stanleys Rd, Merricks North, and hit a tree, 8.50am, Monday 7 August. A passing motorist saw the woman’s car off the wet road and called emergency services. Senior Constable Liza Shields, of Somerville Highway Patrol, said the

woman, 20, of Dandenong, was still in the car when police arrived. She said speed was not thought to be a factor in the accident, and that the car was a write-off. The woman was taken by ambulance to Tyabb Airport and then airlifted to The Alfred hospital for treatment.

New biosecurity rules NEW farm biosecurity rules apply from 1 October and the Mornington Peninsula branch of the Victorian Farmers Federation is planning a workshop to inform farmers. All Australian livestock producers will need a farm biosecurity plan for the coming Livestock Production Assurance program. To sell cattle, sheep and goats at saleyards or direct to meatworks, farmers need LPA accreditation. A biosecurity plan outlines how a producer manages their stock and responds to a pest or disease outbreak.

With about 70 per cent of Australia’s beef being exported, biosecurity is an essential part of Australia maintaining its “clean and green” credentials. The LPA program also covers food safety and animal welfare. Catherine James of Livestock Health and Biosecurity Victoria said that for most producers, developing a biosecurity plan would “simply be capturing the good work they already do to minimise the risk of introducing or spreading diseases, pests and weeds on their properties”.

The Village of choice. The Village Glen retirement community has always been about providing choice to our residents. CHOICE OF ACCOMMODATION Villas and apartments, choice of ﬂoor plans, choice of size and style. There’s something for every budget. CHOICE OF LIFESTYLE For the active, there’s so many choices – golf, gymnasium, pool and bowls. For those more passive but creative times there is the crafts centre with pottery, china painting, quilting and many more. CHOICE OF HEALTH SUPPORT Registered nurse on site 24/7 providing daily clinics and now with Peninsula Flexicare, home support Government funded packages.* CHOICE OF CONTRACT There’s a range of ways to purchase at Village Glen including our popular “no monthly fees or charges ever“ package. All this in the heart of the beautiful Mornington Peninsula. Visit the website or call today.

Want to know more? Fill in the form below and return it to us to receive a free brochure. Name Address