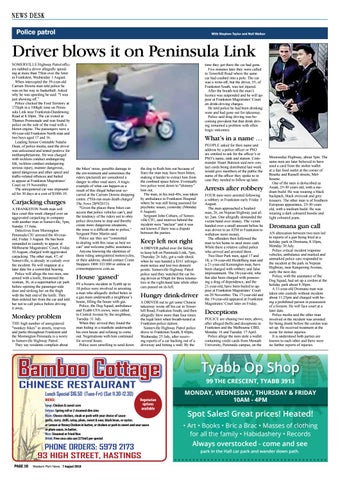 With Stephen Taylor and Neil Walker

Driver blows it on Peninsula Link SOMERVILLE Highway Patrol officers nabbed a driver allegedly speeding at more than 75km over the limit in Frankston, Wednesday 1 August. When intercepted the 39-year-old Carrum Downs man told police he was on his way to basketball. Asked why he was speeding he said: “I was just showing off.” Police clocked the Ford Territory at 175kph in a 100kph zone on Peninsula Link near Frankston-Dandenong Road at 8.30pm. The car exited at Thames Promenade and was found by police on the side of the road with a blown engine. The passengers were a 40-year-old Frankston North man and two boys aged 17 and 16. Leading Senior Constable Natalie Dean, of police media, said the driver was unlicensed and tested positive for methamphetamine. He was charged with reckless conduct endangering life, reckless conduct endangering serious injury, manner dangerous, speed dangerous and other speed and traffic-related offences and bailed to appear at Frankston Magistrates’ Court on 19 November. The unregistered car was impounded for 30 days at a cost of $1006.10.

Carjacking charges A FRANKSTON North man will face court this week charged over an aggravated carjacking in company with another man in Somerville, 5pm, Sunday 17 June. Detectives from Mornington Peninsula CIU arrested the 40-yearold, Friday 3 August. He has been remanded in custody to appear at Melbourne Magistrates’ Court, Friday 10 August, charged with aggravated carjacking. The other man, 47, of Somerville, is already in custody over the incident. He will reappear at a later date for a committal hearing. Police will allege the two men, one armed with a knife, threatened the woman, 36, in a supermarket car park before opening the passenger-side door and striking her on the thigh with the butt end of the knife. They then ordered her from the car and told her not to call police before driving it away.

Monkey problem THE high number of unregistered “monkey bikes” in streets, reserves and parks throughout Frankston and the Mornington Peninsula is a worry to Somerville Highway Patrol. They say residents complain about

time they got there the car had gone. Five minutes later they were called to Towerhill Road where the same car had crashed into a pole. The car was a write-off, but the driver, 55, of Frankston South, was not injured. After the breath test the man’s licence was suspended and he will appear at Frankston Magistrates’ Court on drink-driving charges. He told police he had been drinking wine and had gone out for takeaway. Police said drug driving was becoming prevalent but that drink driving remained a problem with often tragic outcomes.

the bikes’ noise, possible damage to the environment and sometimes the riders (pictured) are considered a danger to other road users. A tragic example of what can happen as a result of this illegal behaviour occurred at the Carrum Downs shopping centre. (“Hit-run mum death charges” The News 28/9/2015). “Given the places these bikes can access that police vehicles can’t, and the tendency of the riders not to obey police directions to stop and thereby create more dangerous situations, the issue is a difficult one to police,” Sergeant Peter Martin said. Police say they are “committed to dealing with this issue as best we can” and welcome public assistance. Anyone knowing the identities of those riding unregistered motorcycles, or their address, should contact Crime Stoppers 1800 333 000 or online at crimestoppersvic.com.au

House ‘gassed’ IN a bizarre incident in Tyabb up to 18 police were involved in arresting a man who allegedly drilled holes in a gas main underneath a neighbour’s house, filling the house with gas. Police, the Dog Squad, ambulance and Tyabb CFA crews, were called to Central Avenue by the neighbour, Tuesday 31 July. When they arrived they found the man hiding in a manhole underneath his own house and refusing to come out. Negotiations with him continued for several hours. Police were unwilling to send down

the dog to flush him out because of fears the man may have been bitten, making it harder to extract him from the confined space below. Eventually two police went down to “shimmy” him out. The man, in his mid-40s, was taken by ambulance to Frankston Hospital where he was still being assessed for psychotic issues, yesterday (Monday 6 August). Sergeant John Coburn, of Somerville CIU, said motives behind the incident were “unclear” and it was not known if there was a dispute between the parties.

Keep left not right A DRIVER pulled over for failing to keep left on Peninsula Link, 7pm, Thursday 26 July, got a rude shock when he was handed a $161 infringement notice and lost two demerit points. Somerville Highway Patrol police said they watched the car being driven at 95kph for three kilometres in the right-hand lane while other cars passed on its left.

Hungry drink-driver A DRIVER out to get some Chinese takeaway wrote off his car in Towerhill Road, Frankston South, and then allegedly blew more than four times the legal limit when breath-tested at Frankston police station. Somerville Highway Patrol police drove to Frankston South, 8.40pm, Wednesday 25 July, after receiving reports of a car backing out of a driveway and hitting a wall. By the

PEOPLE asked for their name and address by a police officer or PSO are entitled to ask for the officer’s or PSO’s name, rank and station. Commander Stuart Bateson said new contact cards being distributed last week would give members of the public the name of the officer they spoke to in case they needed to follow up later.

Arrests after robbery FOUR men were arrested following a robbery in Frankston early Friday 3 August. The men approached a Seaford man, 26, on Nepean Highway just after 2am. One allegedly demanded the victim hand over money. The victim handed over a small amount before he was driven to an ATM in Frankston to withdraw more money. The offenders then followed the man to his home to steal more cash. While there a relative called police who arrived and arrested them. Two Deer Park men, aged 17 and 18, a 19-year-old Heidelberg man and a 21-year-old Kensington man, have been charged with robbery and false imprisonment. The 18-year-old, who has also been charged with possessing a drug of dependence, and the 21-year-old, have been bailed to appear at Frankston Magistrates’ Court on 20 November. The 17-year-old and the 19-year-old appeared at Frankston Magistrates’ Court later on Friday.

Deceptions POLICE are chasing two men, above, after alleged thefts and deceptions in Frankston and the Melbourne CBD, Monday 16 and Tuesday 17 April. Police allege the men stole a wallet containing credit cards from Monash University, Peninsula campus, on the

Dromana gun call AN altercation between two men led to reports of a gun being fired at a holiday park in Dromana, 8.10pm, Monday 30 July. Police critical incident response vehicles, ambulance and marked and unmarked police cars responded to the incident at the park in Nepean Highway, near Kangerong Avenue, early the next day. Police, with the assistance of the Dog Squad, had set up a cordon at the holiday park about 9.30pm. A 51-year-old Dromana man was taken into custody without incident about 11.25pm and charged with being a prohibited person in possession of a firearm. He will face court at a later date. Police media said the other man involved in the incident was arrested for being drunk before the cordon was set up. He received treatment at the scene for minor injuries. It is understood both parties are known to each other and there were no further reports of injuries.

Always overstocked - come and see park in the Hall car park and wander down path.