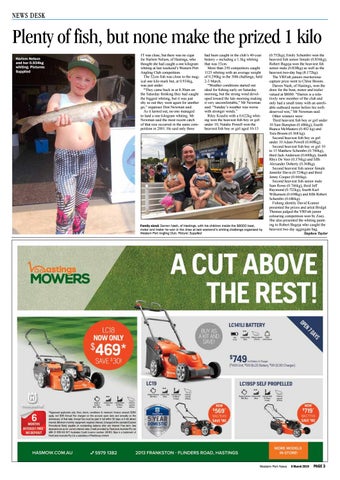 Plenty of fish, but none make the prized 1 kilo Harlem Nelson and her 0.934kg whiting. Pictures: Supplied

IT was close, but there was no cigar for Harlem Nelson, of Hastings, who thought she had caught a one kilogram whiting at last weekend’s Western Port Angling Club competition. The 52cm fish was close to the magical one kilo mark but, at 0.934kg, was just under. “They came back in at 8.30am on the Saturday thinking they had caught the biggest whiting, but it was just shy so out they went again for another go,” organiser Don Newman said. As it turned out, no one managed to land a one kilogram whiting. Mr Newman said the most recent catch of that size occurred in the same competition in 2001. He said only three

had been caught in the club’s 40-year history – including a 1.3kg whiting that was 55cm. More than 250 competitors caught 1125 whiting with an average weight of 0.290kg in the 30th challenge, held 2-3 March. “Weather conditions started out ideal for fishing early on Saturday morning, but the strong wind developed toward the late morning making it very uncomfortable,” Mr Newman said. “Sunday’s weather was worse with stronger winds.” Riley Kraulis with a 0.622kg whiting won the heaviest fish boy or girl under 10; Natalie Powell won the heaviest fish boy or girl aged 10-15

Family sized: Darren Nash, of Hastings, with his children inside the $8000 boat, motor and trailer he won in the draw at last weekend’s whiting challenge organised by Western Port Angling Club. Picture: Supplied