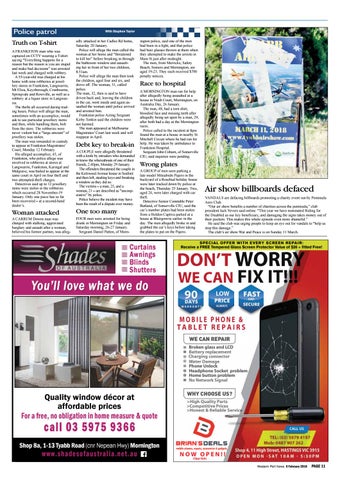 Police patrol Truth on T-shirt A FRANKSTON man who was captured on CCTV wearing a T-shirt saying “Everything happens for a reason but the reason is you are stupid and make bad decisions” was arrested last week and charged with robbery. A 55-year-old was charged at his home with nine robberies at jewellery stores in Frankston, Langwarrin, Mt Eliza, Keysborough, Cranbourne, Springvale and Rowville, as well as a robbery at a liquor store in Langwarrin. The thefts all occurred during trading hours. Police will allege the man, sometimes with an accomplice, would ask to see particular jewellery items and then, while handling them, bolt from the store. The robberies were never violent but a “large amount” of jewellery was stolen. The man was remanded in custody to appear at Frankston Magistrates’ Court, Monday 12 February. His alleged accomplice, 45, of Frankston, who police allege was involved in robberies at stores at Langwarrin, Frankston, Karingal and Mulgrave, was bailed to appear at the same court in April on four theft and two attempted-theft charges. Detectives said up to 12 jewellery items were stolen in the robberies which occurred 28 November-19 January. Only one piece has so far been recovered – at a second-hand dealer’s.

A CARRUM Downs man was charged with stalking, aggravated burglary and assault after a woman, believed his former partner, was alleg-

edly attacked in her Cadles Rd home, Saturday 20 January. Police will allege the man called the woman at her home and “threatened to kill her” before breaking in through the bathroom window and assaulting her in front of her two children, 8.51am. Police will allege the man then took the children, aged four and six, and drove off. The woman, 31, called police. The man, 32, then is said to have driven back and, leaving the children in the car, went inside and again assaulted the woman until police arrived and arrested him. Frankston police Acting Sergeant Kirby Tonkin said the children were not harmed. The man appeared at Melbourne Magistrates’ Court last week and will reappear in April.

Debt key to break-in A COUPLE were allegedly threatened with a knife by intruders who demanded to know the whereabouts of one of their friends, 2.40pm, Monday 29 January. The offenders threatened the couple in the Kirkwood Avenue house in Seaford and then left, stealing keys and breaking a window as they did so. The victims – a man, 25, and a woman, 21 – are described as “uncooperative” by police. Police believe the incident may have been the result of a dispute over money.

One too many FOUR men were arrested for being drunk in Mornington on Friday and Saturday morning, 26-27 January. Sergeant Daniel Patten, of Morn-

ington police, said one of the men had been in a fight, and that police had beer glasses thrown at them when they attempted to make the arrests in Main St just after midnight. The men, from Merricks, Safety Beach, Somers and Mornington, are aged 19-23. They each received $700 penalty notices.

Race to hospital A MORNINGTON man ran for help after allegedly being assaulted at a house in Noah Court, Mornington, on Australia Day, 26 January. The man, 48, had a torn shirt, bloodied face and missing teeth after allegedly being set upon by a man, 29, after both had a day at the Mornington races. Police called to the incident at 8pm found the man at a house in nearby St Mitchell Circuit where he had run for help. He was taken by ambulance to Frankston Hospital. Sergeant John Coburn, of Somerville CIU, said inquiries were pending.

Wrong plates A GROUP of men seen parking a late model Mitsubishi Pajero in the backyard of a Rosebud holiday house were later tracked down by police at the beach, Thursday 25 January. Two, aged 24, were later charged with car theft. Detective Senior Constable Peter Butland, of Somerville CIU, said the car’s number plates had been stolen from a Holden Captiva parked at a house at Blairgowrie earlier in the day. The men allegedly broke in and grabbed the car’s keys before taking the plates to put on the Pajero.

Air show billboards defaced VANDALS are defacing billboards promoting a charity event run by Peninsula Aero Club. “Our air show benefits a number of charities across the peninsula,” club president Jack Vevers said online. “This year we have nominated Riding for the Disabled as our key beneficiary, and damaging the signs takes money out of their pockets. This makes this whole episode even more shameful.” He said the club was urging people to keep an eye out for vandals to “help us stop this damage.” The club’s air show War and Peace is on Sunday 11 March.

DON'TWORR WE CAN FIX IT! MOBILE PHONE & TABLET REPAIRS

WE CAN CAN REPAIR REPAIR WE

l WHY WHYCHOOSE CHOOSEUS? US j