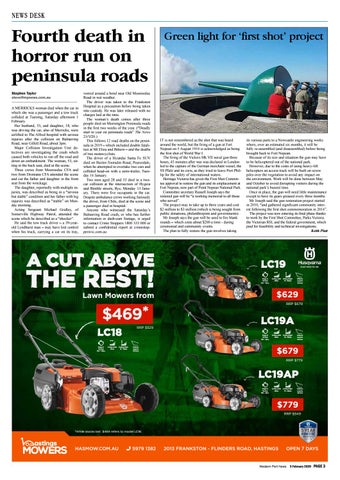 Fourth death in horror run on peninsula roads Stephen Taylor steve@mpnews.com.au A MERRICKS woman died when the car in which she was a passenger and a tow truck collided at Tuerong, Saturday afternoon 1 February. Her husband, 53, and daughter, 18, who was driving the car, also of Merricks, were airlifted to The Alfred hospital with serious injuries after the collision on Balnarring Road, near Gillett Road, about 3pm. Major Collision Investigation Unit detectives are investigating the crash which caused both vehicles to run off the road and down an embankment. The woman, 53, sitting in the back seat, died at the scene. Three crews from Moorooduc CFA and two from Dromana CFA attended the scene and cut the father and daughter in the front seat from the wreckage. The daughter, reportedly with multiple injuries, was described as being in a “serious but stable” condition and her father with leg injuries was described as “stable” on Monday morning. Acting Sergeant Michael Gridley, of Somerville Highway Patrol, attended the scene which he described as a “shocker”. He said the tow truck driver – a 39-yearold Lyndhurst man – may have lost control when his truck, carrying a car on its tray,

veered around a bend near Old Moorooduc Road in wet weather. The driver was taken to the Frankston Hospital as a precaution before being taken into custody. He was later released with no charges laid at the time. The woman’s death comes after three people died on Mornington Peninsula roads in the first two weeks of the year. (“Deadly start to year on peninsula roads” The News 21/1/20.) This follows 12 road deaths on the peninsula in 2019 – which included double fatalities at Mt Eliza and Bittern – and the deaths of two motorcyclists. The driver of a Hyundai Santa Fe SUV died on Baxter-Tooradin Road, Pearcedale, when he attempted to overtake two cars and collided head-on with a semi-trailer, Tuesday 14 January. Two men aged 28 and 33 died in a twocar collision at the intersection of Hygeia and Bimble streets, Rye, Monday 13 January. There were five occupants in the car. Despite ambulance crews working furiously the driver, from Chile, died at the scene and a passenger died in hospital. Anyone who witnessed the Saturday’s Balnarring Road crash, or who has further information or dash-cam footage, is urged to contact Crime Stoppers 1800 333 000 or submit a confidential report at crimestoppersvic.com.au

IT is not remembered as the shot that was heard around the world, but the firing of a gun at Fort Nepean on 5 August 1914 is acknowledged as being the first shot of World War I. The firing of the Vickers Mk VII naval gun three hours, 45 minutes after war was declared in London led to the capture of the German merchant vessel, the SS Pfalz and its crew, as they tried to leave Port Phillip for the safety of international waters. Heritage Victoria has given the First Shot Committee approval to restore the gun and its emplacement at Fort Nepean, now part of Point Nepean National Park. Committee secretary Russell Joseph says the restored gun will be “a working memorial to all those who served”. The project may to take up to three years and cost $2 million to $3 million (which is being sought from public donations, philanthropists and governments). Mr Joseph says the gun will be used to fire blank rounds – which costs about $200 a time - during ceremonial and community events. The plan to fully restore the gun involves taking

its various parts to a Newcastle engineering works where, over an estimated six months, it will be fully re-assembled (and disassembled) before being brought back to Fort Nepean. Because of its size and situation the gun may have to be helicoptered out of the national park. However, due to the costs of using heavy-lift helicopters an access track will be built on screw piles over the vegetation to avoid any impact on the environment. Work will be done between May and October to avoid disrupting visitors during the national park’s busiest time. Once in place, the gun will need little maintenance except to have its gears greased every three months. Mr Joseph said the gun restoration project started in 2010, “and gathered significant community interest following the first shot commemoration in 2014”. The project was now entering its final phase thanks to work by the First Shot Committee, Parks Victoria the Victorian RSL and the federal government, which paid for feasibility and technical investigations. Keith Platt