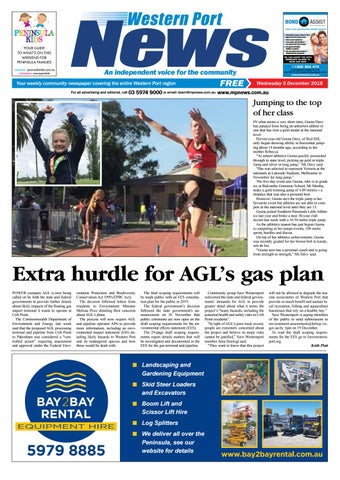 Jumping to the top of her class IN what seems a very short time, Geena Davy has jumped from being an unknown athlete to one that has won a gold medal at the national level. Eleven-year-old Geena Davy, of Red Hill, only began showing ability in horizontal jumping about 14 months ago, according to her mother Rebecca. “At school athletics Geena quickly proceeded through to state level, picking up gold in triple Jump and silver in long jump,” Ms Davy said. “She was selected to represent Victoria at the nationals at Lakeside Stadium, Melbourne in November for long jump.” The five-day event saw Geena, who is in grade six at Balcombe Grammar School, Mt Martha, make a gold winning jump of 4.89 metres – a distance that was also a personal best. However, Geena says the triple jump is her favourite event but athletes are not able to compete at the national level until they are 13. Geena joined Southern Peninsula Little Athletics last year and broke a near 30-year club record last week with a 10.50 metre triple jump. As the athletics season has just begun Geena is competing in her jumps events, 100 metre sprint, hurdles and discus. On top of her athletics achievements, Geena was recently graded for her brown belt in karate, zen do kai. “Geena now has a personal coach and is going from strength to strength,” Ms Davy said.

Extra hurdle for AGL’s gas plan POWER company AGL is now being called on by both the state and federal governments to provide further details about likely impacts of the floating gas import terminal it wants to operate at Crib Point. The Commonwealth Department of Environment and Energy last week said that the proposed AGL processing terminal and pipeline from Crib Point to Pakenham was considered a “controlled action” requiring assessment and approval under the Federal Envi-

ronment Protection and Biodiversity Conservation Act 1999 (EPBC Act). The decision followed letters from residents to Environment Minister Melissa Price detailing their concerns about AGL’s plans. The process will now require AGL and pipeline operator APA to provide more information, including an environmental impact statement (EIS) detailing likely hazards to Western Port and its endangered species and how these would be dealt with.

Landscaping and Gardening Equipment Skid Steer Loaders and Excavators Boom Lift and Scissor Lift Hire Log Splitters We deliver all over the Peninsula, see our website for details

Community group Save Westernport welcomed the state and federal governments’ demands for AGL to provide greater detail about what it terms the project’s “many hazards, including the potential health and safety risks to Crib Point residents”. “In light of AGL’s poor track record, people are extremely concerned about the project and believe its many risks cannot be justified,” Save Westernport member Julia Stockigt said. “They want to know that this project

will not be allowed to degrade the marine ecosystems of Western Port that provide so much benefit and sustain local recreation, fishing and aquaculture businesses that rely on a healthy bay.” Save Westernport is urging members of the public to send submissions to environment.assessment@delwp.vic. gov.au by 5pm on 19 December. To read the draft scoping requirements for the EES go to Savewesternport.org Keith Platt