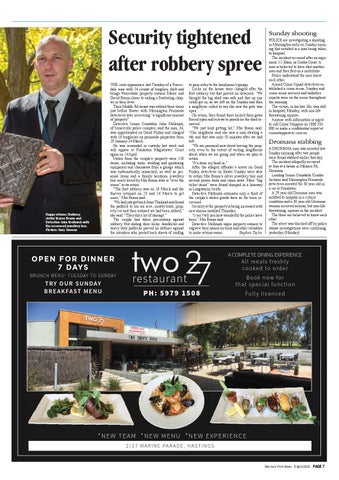 Security tightened after robbery spree THE court appearance last Tuesday of a Pearcedale man with 54 counts of burglary, theft and brings Pearcedale property owners Maree and David Brann closer to ending a frustrating chapter in their lives. Their Middle Rd house was robbed three times just before Easter with Mornington Peninsula detectives later recovering “a significant amount of property”. Detective Senior Constable John Melhuish, of Somerville police complex, said the man, 34, was apprehended on Good Friday and charged with 16 burglaries on peninsula properties from 29 January-24 March. He was remanded in custody last week and will appear at Frankston Magistrates’ Court again on 14 April. Stolen from the couple’s property were 150 items, including tools, welding and gardening equipment and chainsaws from a garage which was systematically ransacked, as well as personal items and a family heirloom jewellery box much loved by Mrs Brann who is “over the moon” at its return. “The first robbery was on 18 March and the thieves returned on 23 and 24 March to get more,” Mrs Brann said. “We had just got back from Thailand and found the padlock to our six acre, mostly bush, property cut and then realised we had been robbed,” she said. “They did a lot of damage.” The couple had taken precautions against robbery. But sliding door locks, deadlocks and heavy duty padlocks proved no defence against the intruders who peeled back sheets of roofing

to gain entry to the handyman’s garage. Locks on the house were changed after the first robbery, but that proved no deterrent. “We thought the big shed was safe and that no one could get in, so we left on the Sunday and then a neighbour called to say she saw the gate was open …” On return, they found three locked farm gates forced open and screws to panels on the shed removed. “We just kept getting hit,” Mrs Brann said. “Our neighbour said she saw a man stealing a tub and that was only 50 minutes after we had left. “We are paranoid now about leaving the property, even to the extent of texting neighbours about when we are going and when we plan to return. “It’s done my head in.” After the alleged offender’s arrest on Good Friday, detectives on Easter Sunday were able to return Mrs Brann’s silver jewellery box and several power tools and chain saws. More “big ticket items” were found dumped in a laneway in Langwarrin South. Detective Melhuish estimates only a third of the couple’s stolen goods have so far been recovered. Security at the property is being increased with new alarms installed Thursday. “I can’t tell you how wonderful the police have been,” Mrs Brann said. Detective Melhuish urges property owners to engrave their names on tools and other valuables to make returns easier. Stephen Taylor

POLICE are investigating a shooting in Mornington early on Sunday morning that resulted in a man being taken to hospital. The incident occurred after an argument, 12.30am, in Cooba Court. A man is believed to have shot another man and then fled on a motorbike. Police understand the men know each other. Armed Crime Squad detectives established a crime scene, Sunday, and crime scene services and ballistics experts were on the scene throughout the morning. The victim, in his late 20s, was still in hospital, Monday, with non-life threatening injuries. Anyone with information is urged to call Crime Stoppers on 1800 333 000 or make a confidential report at crimestoppersvic.com.au

Dromana stabbing A DROMANA man was arrested late Sunday morning after two people were found stabbed earlier that day. The incident allegedly occurred at 3am at a house in Monaco Pd, Dromana. Leading Senior Constable Kendra Jackson said Mornington Peninsula detectives arrested the 30 year old in a car at Frankston. A 29 year old Dromana man was airlifted to hospital in a critical condition and a 38 year old Dromana woman received serious, but non-life threatening, injuries in the incident. The three are believed to know each other. The street was blocked off by police whose investigations were continuing yesterday (Monday).