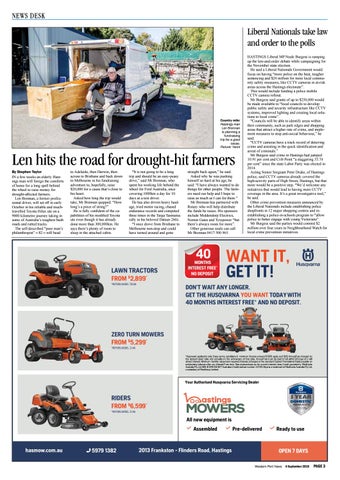 Liberal Nationals take law and order to the polls

Len hits the road for drought-hit farmers By Stephen Taylor IN a few weeks an elderly Hastings man will forego the comforts of home for a long spell behind the wheel to raise money for drought-affected farmers. Len Brennan, a former professional driver, will set off in early October in his reliable and muchtravelled Toyota Hilux ute on a 9000 kilometre journey taking in some of Australia’s toughest bush roads and rutted tracks. The self-described “poor man’s philanthropist” – 82 – will head

to Adelaide, then Darwin, then across to Brisbane and back down to Melbourne in his fundraising adventure to, hopefully, raise $20,000 for a cause that’s close to his heart. Asked how long the trip would take, Mr Brennan quipped: “How long’s a piece of string?” He is fully confident of the capabilities of his modified Toyota ute even though it has already done more than 300,000km. He says there’s plenty of room to sleep in the attached cabin.

“It is not going to be a long trip and should be an easy-peasy drive,” said Mr Brennan, who spent his working life behind the wheel for Ford Australia, once covering 1000km a day for 10 days as a test driver. He has also driven heavy haulage, tried motor racing, chased endurance records and competed three times in the Targa Tasmania rally in his beloved Datsun 260z. “I once drove from Brisbane to Melbourne non-stop and could have turned around and gone

straight back again,” he said. Asked why he was pushing himself so hard at his age, he said: “I have always wanted to do things for other people. The farmers need our help and I hope to raise as much as I can for them.” Mr Brennan has partnered with Rotary who will help distribute the funds he raises. His sponsors include Middendorp Electrics, Norton Gates and Tyrepower “but there’s always room for more”. Other generous souls can call Mr Brennan 0417 500 965.

HASTINGS Liberal MP Neale Burgess is ramping up the law-and-order debate while campaigning for the November state election. He said a Liberal Nationals Government would focus on having “more police on the beat, tougher sentencing and $24 million for more local community safety measures, like CCTV cameras in at-risk areas across the Hastings electorate”. This would include funding a police mobile CCTV camera rollout. Mr Burgess said grants of up to $250,000 would be made available to “local councils to develop public safety and security infrastructure like CCTV systems, improved lighting and creating local solutions to local crime”. “Councils will be able to identify areas within their community, such as park edges and shopping areas that attract a higher rate of crime, and implement measures to stop anti-social behaviour,” he said. “CCTV cameras have a track record of deterring crime and assisting in the quick identification and arrest of criminals.” Mr Burgess said crime in Hastings had jumped 10.91 per cent and Crib Point “a staggering 55.74 per cent” since the state Labor Party was elected in 2014. Acting Senior Sergeant Peter Drake, of Hastings police, said CCTV cameras already covered the high-activity parts of High Street, Hastings, but that more would be a positive step. “We’d welcome any initiatives that would lead to having more CCTV coverage in the area. It’s a great investigative tool,” he said. Other crime prevention measures announced by the Liberal Nationals include establishing police shopfronts in 12 major shopping centres and reestablishing a police-in-schools program to “allow police to better engage with young Victorians”. Mr Burgess said the parties would commit $2 million over four years to Neighbourhood Watch for local crime prevention initiatives.

DON’T WAIT ANY LONGER. GET THE HUSQVARNA YOU WANT TODAY WITH 40 MONTHS INTEREST FREE^ AND NO DEPOSIT.