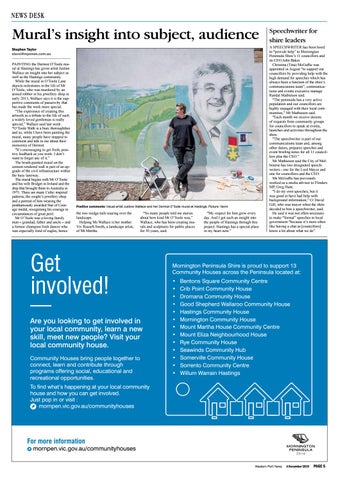 Mural’s insight into subject, audience Stephen Taylor steve@mpnews.com.au PAINTING the Dermot O’Toole mural at Hastings has given artist Justine Wallace an insight into her subject as well as the Hastings community. While the mural in O’Toole Lane depicts milestones in the life of Mr O’Toole, who was murdered by an armed robber in his jewellery shop in early 2013, Wallace says it is the supportive comments of passers-by that has made the work more special. “The experience of creating this artwork as a tribute to the life of such a widely loved gentleman is really special,” Wallace said last week. “O’Toole Walk is a busy thoroughfare and so, while I have been painting the mural, many people have stopped to comment and talk to me about their memories of Dermot. “It’s encouraging to get fresh, positive feedback as you work. I don’t want to forget any of it.” The brush-painted mural on the cement rendered wall is part of an upgrade of the civil infrastructure within the busy laneway. The mural begins with Mr O’Toole and his wife Bridget in Ireland and the ship that brought them to Australia in 1971. There are many Celtic inspired patterns, the couple’s jewellery shop and a portrait of him wearing the posthumously awarded Star of Courage medal, recognising his courage in circumstances of great peril. Mr O’Toole was a loving family man – grandad, father and uncle – and a former champion Irish dancer who was especially fond of eagles, hence

the two wedge-tails soaring over the landscape. Helping Ms Wallace is her mother Viv Russell-Smith, a landscape artist, of Mt Martha.

“So many people told me stories about how kind Mr O’Toole was,” Wallace, who has been creating murals and sculptures for public places for 30 years, said.

Get involved! Are you looking to get involved in your local community, learn a new skill, meet new people? Visit your local community house. Community Houses bring people together to connect, learn and contribute through programs offering social, educational and recreational opportunities.

“My respect for him grew every day. And I got such an insight into the people of Hastings through this project. Hastings has a special place in my heart now.”

Speechwriter for shire leaders A SPEECHWRITER has been hired to “provide help” to Mornington Peninsula Shire’s 11 councillors and its CEO John Baker. Christina (Tina) McGuffie was appointed in August “to support our councillors by providing help with the high demand for speeches which has always been a function of the shire’s communications team”, communications and events executive manage Randal Mathieson said. “The peninsula has a very active population and our councillors are highly engaged with their local communities,” Mr Mathieson said. “Each month we receive dozens of requests from community groups for councillors to speak at events, launches and activities throughout the shire. “The speechwriter is part of our communications team and, among other duties, prepares speeches and event briefing notes for all 11 councillors plus the CEO.” Mr Mathieson said the City of Melbourne has two designated speechwriters - one for the Lord Mayor and one for councillors and the CEO. Ms McGuffie has previously worked as a media advisor to Flinders MP, Greg Hunt. “I do my own speeches, but it was good to have had help with background information,” Cr David Gill, who was mayor when the shire decided to hire a speechwriter, said. He said it was not often necessary to make “formal” speeches in local government “because it’s more often like having a chat as [councillors] know a lot about what we do”.

To find what’s happening at your local community house and how you can get involved. Just pop in or visit : mornpen.vic.gov.au/communityhouses