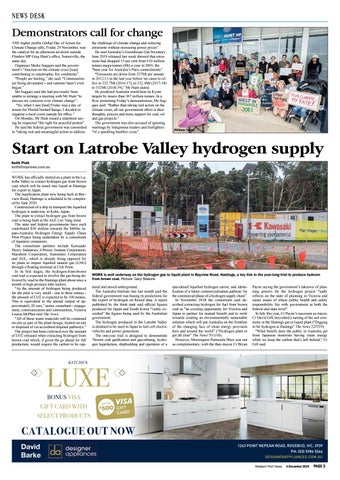 Demonstrators call for change THE higher profile Global Day of Action for Climate Change rally, Friday 29 November, was the catalyst for an afternoon sit-down outside Flinders MP Greg Hunt’s office, Somerville, the same day. Organiser Meike Suggars said the government’s “inaction on the climate crisis [was] contributing to catastrophic fire conditions”. “People are hurting,” she said. “Communities are being devastated – and summer hasn’t even begun.” Ms Suggars said she had previously been unable to arrange a meeting with Mr Hunt “to discuss my concerns over climate change”. “So, when I saw [last] Friday was a day of action for ThisIsClimateChange, I decided to organise a local event outside his office.” On Monday, Mr Hunt issued a statement saying he respected “the right for peaceful protest”. He said the federal government was committed to “taking real and meaningful action to address

the challenge of climate change and reducing emissions without increasing power prices”. He said Australia’s Greenhouse Gas Inventory: June 2019 released last week showed that emissions had dropped 13 per cent from 610 million tonnes mega-tonnes (Mt) a year in 2005, the “base year for Australia’s Paris commitments”. “Emissions are down from 537Mt per annum in 2012-13 in the last year before we came to office to 532.7Mt (2016-17), to 532.4Mt (2017-18) to 532Mt (2018-19),” Mr Hunt stated. He predicted Australia world beat its Kyoto targets by moere than 367 million tonnes. In a flyer promoting Friday’s demonstration, Ms Suggars said: “Rather than taking real action on the climate crisis, all our government offers is their thoughts, prayers and more support for coal, oil and gas projects.” The government was also accused of ignoring warnings by Indigenous leaders and firefighters “of a spiralling bushfire crisis”.

Start on Latrobe Valley hydrogen supply Keith Platt keith@mpnews.com.au WORK has officially started on a plant in the Latrobe Valley to extract hydrogen gas from brown coal which will be tuned into liquid at Hastings for export to Japan. The liquification plant now being built in Bayview Road, Hastings is scheduled to be completed by June 2020. Construction of a ship to transport the liquefied hydrogen is underway in Kobe, Japan. The plant to extract hydrogen gas from brown coal is being built at the AGL Loy Yang mine The state and federal governments have each contributed $50 million towards the $400m Japan–Australia Hydrogen Energy Supply Chain Pilot Project being undertaken by a consortium of Japanese companies. The consortium partners include Kawasaki Heavy Industries, J-Power, Iwatani Corporation, Marubeni Corporation, Sumitomo Corporation and AGL, which is already being opposed for its plans to import liquified natural gas (LNG) through a floating terminal at Crib Point. In its first stages, the hydrogen-from-brown coal trial is expected to involve the gas being delivered by road to the Hastings plant about once a month in high pressure tube trailers. “As the amount of hydrogen being produced for the pilot is very small - one to three tonnes the amount of CO2 is expected to be 100 tonnes. This is equivalent to the annual output of approximately 20 cars,” senior consultant - engagement, communication and communities, Victoria Louisa McPhee told The News. “All of these waste materials will be contained on-site as part of the plant design, treated on-site or disposed of via accredited disposal pathways.” The project has been criticised over the amount of CO2 released when extracting hydrogen from brown coal which, if given the go ahead for full production, would require the carbon to be cap-

WORK is well underway on the hydrogen gas to liquid plant in Bayview Road, Hastings, a key link in the year-long trial to produce hydroen from brown coal. Picture: Gary Sissons tured and stored underground. The Australia Institute late last month said the federal government was basing its predictions for the export of hydrogen on flawed data. A report published by the think tank said official figures produced for Japan and South Korea “vastly exceeded” the figures being used by the Australian government. The hydrogen produced in the Latrobe Valley is destined to be used in Japan to fuel cell electric vehicles and power generation. The one-year trial is designed to demonstrate “brown coal gasification and gas-refining, hydrogen liquefaction, shipbuilding and operation of a

specialised liquefied hydrogen carrier, and identification of a future commercialisation pathway for the commercial phase of a hydrogen supply chain”. In November 2018 the consortium said described extracting hydrogen for fuel from brown coal as “an exciting opportunity for Victoria and Japan to partner for mutual benefit and to work towards creating an environmentally sustainable solution which will put Australia on the frontline of the changing face of clean energy provision here and around the world” (“Hydrogen plant to get all clear” The News 7/11/18). However, Mornington Peninsula Shire was not so complimentary, with the then mayor Cr Bryan

Payne saying the government’s takeover of planning powers for the hydrogen project “sadly reflects on the state of planning in Victoria and raises issues of where public health and safety responsibility fits with government at both the federal and state level”. In July this year, Cr Payne’s successor as mayor, Cr David Gill, boycotted a turning of the sod ceremony at the Hastings gas to liquid plant (“Digging in for hydrogen at Hastings” The News 22/7/19). “What benefit does the public in Australia get from Japanese motorists having clean energy while we keep the carbon that’s left behind,” Cr Gill said.