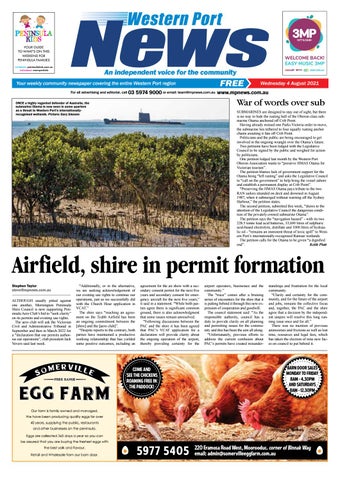 Western Port YOUR GUIDE TO WHAT’S ON THIS WEEKEND FOR PENINSULA FAMILIES FACEBOOK:

War of words over sub

ONCE a highly regarded defender of Australia, the submarine Otama is now seen in some quarters as a threat to Western Port’s internationallyrecognised wetlands. Picture: Gary Sissons

SUBMARINES are designed to stay out of sight, but there is no way to hide the rusting hull of the Oberon class submarine Otama anchored off Crib Point. Having already missed one Parks Victoria order to move, the submarine lies tethered to four equally rusting anchor chains awaiting it fate off Crib Point. Politicians and the public are being encouraged to get involved in the ongoing wrangle over the Otama’s future. Two petitions have been lodged with the Legislative Council to be signed by the public and weighed for action by politicians. One petition lodged last month by the Western Port Oberon Association wants to “preserve HMAS Otama for Victorian tourism”. The petition blames lack of government support for the Otama being “left rusting” and asks the Legislative Council to “call on the government” to help bring the vessel ashore and establish a permanent display at Crib Point”. “Preserving the HMAS Otama pays tribute to the two RAN sailors stranded on deck and drowned in August 1987, when it submerged without warning off the Sydney Harbour,” the petition states. The second petition, submitted this week, “draws to the attention of the Legislative Council the dangerous condition of the privately-owned submarine Otama”. The petition says the “navigation hazard” - with its two 228.5 tonne lead acid batteries, 33,600 litres of sulphuric acid-based electrolyte, distillate and 1000 litres of hydraulic oil - “remains an imminent threat of toxic spill” to Western Port’s internationally-recognised Ramsar wetlands. The petition calls for the Otama to be given “a dignified end”. Keith Platt

Airfield, shire in permit formation Stephen Taylor steve@mpnews.com.au ALTHOUGH usually pitted against one another, Mornington Peninsula Shire Council is now supporting Peninsula Aero Club’s bid to “seek clarity” on its permits and existing use rights. The aero club will ask the Victorian Civil and Administrative Tribunal in September and then in March 2022 for a “declaration that our permits authorise our operations”, club president Jack Vevers said last week.

“Additionally, or in the alternative, we are seeking acknowledgement of our existing use rights to continue our operations, just as we successfully did with the Church Hour application in VCAT.” The shire says “reaching an agreement on the Tyabb Airfield has been an ongoing commitment between the [shire] and the [aero club]”. “Despite reports to the contrary, both parties have maintained a productive working relationship that has yielded some positive outcomes, including an

agreement for the air show with a secondary consent permit for the next five years and secondary consent for emergency aircraft for the next five years,” it said in a statement. “While both parties agree there is significant common ground, there is also acknowledgment that some issues remain unresolved. “Following discussions between the PAC and the shire it has been agreed that PAC’s VCAT application for a declaration will provide clarity about the ongoing operation of the airport, thereby providing certainty for the

airport operators, businesses and the community.” The “truce” comes after a bruising series of encounters for the shire that it is putting behind it through this new expression of cooperation and goodwill. The council statement said: “As the responsible authority, council has a duty to provide clarity on all planning and permitting issues for the community and this has been the aim all along. “Unfortunately, previous efforts to address the current confusion about PAC’s permits have created misunder-

standings and frustration for the local community. “Clarity and certainty for the community, and for the future of the airport and jobs, remains the collective focus and, together, the PAC and the shire agree that a decision by the independent umpire will resolve this long running issue once and for all.” There was no mention of previous animosities and frictions as well as lost time, resources and legal fees, which has taken the election of nine new faces on council to put behind it.

Our farm is family owned and managed. We have been producing quality eggs for over 40 years, supplying the public, restaurants and other businesses on the peninsula. Eggs are collected 365 days a year so you can be assured that you are buying the freshest eggs with the best yolk and flavour. Retail and Wholesale from our barn door.