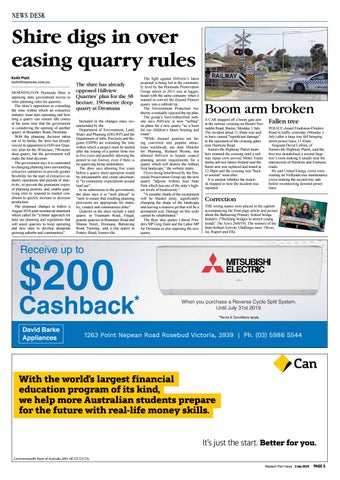 Shire digs in over easing quarry rules Keith Platt keith@mpnews.com.au MORNINGTON Peninsula Shire is opposing state government moves to relax planning rules for quarries. The shire’s opposition to extending the time within which an extractive industry must start operating and how long a quarry can remain idle comes at the same time that the government is considering the opening of another quarry in Boundary Road, Dromana. With the planning decision taken out of its hands, the shire has already voiced its opposition to Hillview Quarries’ plan for the 38 hectare, 190-metre deep quarry, but the government will make the final decision. The government says it is committed to changing planning laws surrounding extractive industries to provide greater flexibility for the start of extractive industry operations and periods of inactivity; to prevent the premature expiry of planning permits; and, enable quarrying sites to respond to market conditions to quickly increase or decrease production. The proposed changes to follow a August 2018 joint ministerial statement which called for “a better approach for land use planning and regulations that will assist quarries to keep operating and new sites to develop alongside growing suburbs and communities”.

The shire has already opposed Hillview Quarries’ plan for the 38 hectare, 190-metre deep quarry at Dromana Included in the changes since recommended by the Department of Environment, Land, Water and Planning (DELWP) and the Department of Jobs, Precincts and Regions (DJPR) are extending the time within which a project must be started after the issuing of a permit from two to five years and possibly allowing the permit to run forever, even if there is no quarrying being undertaken. The shire says allowing five years before a quarry starts operation would be unreasonable and create uncertainty “in community expectations around land use”. In its submission to the government, the shire says it is “well placed” to “seek to ensure that resulting planning provisions are appropriate for industry, council and communities alike”. Quarries in the shire include a sand quarry in Truemans Road, Fingal, granite quarries in Boundary Road and Manna Street, Dromana; Balnarring Road, Tuerong; and, a clay quarry in Pottery Road, Somerville.

The fight against Hillview’s latest proposal is being led at the community level by the Peninsula Preservation Group which in 2013 was at loggerheads with the same company when it wanted to convert the disused Pioneer quarry into a rubbish tip. The Environment Protection Authority eventually rejected the tip plan. The group’s SaveArthursSeat website says Hillview is now “selling” its plans for a new quarry “as a boon for our children’s future housing and roads”. “While disused quarries are being converted into popular attractions worldwide, our state Minister for Planning, Richard Wynne, has allowed Hillview to bypass council planning permit requirements for a quarry which will destroy the Arthurs Seat landscape,” the website states. Flyers being letterboxed by the Peninsula Preservation Group say the new quarry “adjoins Arthurs Seat State Park which has one of the state’s highest levels of biodiversity”. “A sizeable chunk of the escarpment will be blasted away, significantly changing the shape of the landscape and leaving a massive pit that will be a permanent scar. Damage on this scale cannot be rehabilitated.” The flyer also quotes Liberal Flinders MP Greg Hunt and the Labor MP for Dromana as also opposing the new quarry.

Boom arm broken A CAR snapped off a boom gate arm at the railway crossing on Baxter-Tooraddin Road, Baxter, Monday 1 July. The incident about 11.40am was said to have caused “significant damage” to the operation of the crossing gates near Hawkins Road. Somerville Highway Patrol members manned the crossing until a railway repair crew arrived. Metro Trains media advisor James Ireland said the boom arm was replaced and tested at 12.48pm and the crossing was “back to normal” soon after. It is unclear whether the motorist stopped or how the incident was reported.

Correction THE wrong names were placed in the caption accompanying the front page article and picture about the Balnarring Primary School bridge builders. (“Building bridges to stretch young minds” The News 26/6/19). The winners of the Inter-School Activity Challenge were Oliver, Jai, Rupert and Ella.

With the world’s largest financial education program of its kind, we help more Australian students prepare for the future with real-life money skills. It’s just the start. Better for you. Commonwealth Bank of Australia ABN 48 123 123 124.