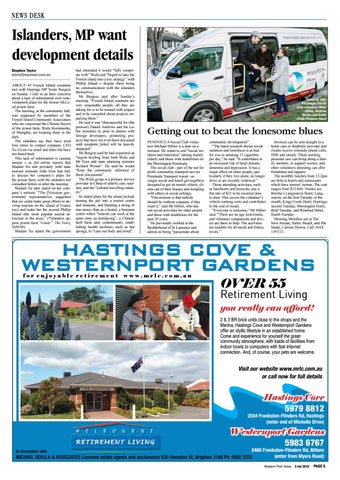 Islanders, MP want development details Stephen Taylor steve@mpnews.com.au ABOUT 45 French Island residents met with Hastings MP Neale Burgess on Sunday 1 July to air their concerns about a lack of information over redevelopment plans for the former McLeod prison farm. The meeting, at the community hall, was organised by members of the French Island Community Association who are concerned the Chinese buyers of the prison farm, Wufu Investments, of Shanghai, are keeping them in the dark. The islanders say they have tried four times to contact company CEO Xu Ziyun via email and letter but have not heard back. This lack of information is causing unease – as did online reports that Madam Xu met privately with state tourism minister John Eren last July to discuss her company’s plans for the prison farm, with the islanders not consulted before or after the meeting. Madam Xu later stated on her company’s website: “The [Victorian government] representatives suggested that we could make great efforts to develop tourism on the island of France (sic) and make her the second Phillip Island (the most popular tourist attraction in the area).” (“Islanders oppose prison farm ‘vision’” The News, 26/6/18). Madam Xu stated the government

had intimated it would “fully cooperate with” Wufu and “hoped to take the French island into a key strategy” with Phillip Island – despite there being no communication with the islanders themselves. Mr Burgess said after Sunday’s meeting: “French Island residents are very reasonable people; all they are asking for is to be treated with respect and to be consulted about projects impacting them.” He said it was “disrespectful for (the premier) Daniel Andrews and his Labor ministers to pose in photos with foreign developers, promoting projects that have not even been discussed with residents [who] will be heavily impacted”. Mr Burgess said he had requested an “urgent briefing from both Wufu and Mr Eren and state planning minister Richard Wynne”. He said he would “keep the community informed of those discussions”. The Wufu group is a primary service provider in China of elderly care, tourism, and the “cultural travelling industry”. Its stated plans for the island include turning the jail into a tourist centre and museum, and building a string of one-storey flats as a hostel, a business centre where “tourists can work at the same time as holidaying”, a Chinese herb farm, and, contentiously, establishing health facilities, such as hot springs, to “cure our body and mind”.

Getting out to beat the lonesome blues PENINSULA Social Club volunteer Michael Hillier is a man on a mission: He wants to end “social isolation and loneliness” among mainly elderly and those with disabilities on the Mornington Peninsula. The social club - part of the not for profit community transport service Peninsula Transport Assist - arranges social and lunch get-togethers designed to get its mainly elderly clients out of their houses and mingling with others in social settings. “Our mission is that nobody should be without company if they want it,” said Mr Hillier, who has run social activities for older people and those with disabilities for the past 20 years. He previously worked at the Brotherhood of St Laurence and admits to being “passionate about

community development”. “The latest research shows social isolation and loneliness is as bad for you as smoking 15 cigarettes per day,” he said. “It contributes to an increased risk of heart disease, dementia and depression. It has a major effect on older people, particularly if they live alone, no longer drive or are recently widowed.” Those attending activities, such as luncheons and musicals, pay a flat rate of $25 to be escorted door to door. This covers the volunteer’s vehicle running costs and contributes to the cost of meals. “Everyone is welcome,” Mr Hillier said. “There are no age restrictions, and volunteer companions and drivers are there to help. The activities are suitable for all needs and fitness levels.”

Invoices can be sent straight to a home care or disability provider and clients receive reminder phone calls, SMS and emails. Those needing personal care can bring along a family member, or support worker, and other volunteers attending can offer friendship and support. The monthly lunches from 12-2pm are held at hotels and restaurants which have seniors’ menus. The cost ranges from $15-$40. Venues are Beretta’s Langwarrin Hotel, Langwarrin, on the first Tuesday of the month, Kings Creek Hotel, Hastings, second Tuesday, Mornington Hotel, third Tuesday, and Rosebud Hotel, fourth Tuesday. Morning Melodies are at The New Atrium, Safety Beach, and The Sands, Carrum Downs. Call: 0418 139 515.

Retirement Living you really can afford! 2 & 3 BR brick units close to the shops and the Marina, Hastings Cove and Westernport Gardens offer an idyllic lifestyle in an established home. Come and experience for yourself the great community atmosphere, with loads of facilities from indoor bowls to computers with fast internet connection. And, of course, your pets are welcome.