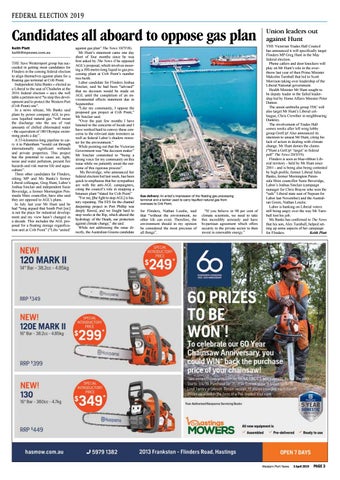 Candidates all aboard to oppose gas plan Keith Platt keith@mpnews.com.au THE Save Westernport group has succeeded in getting most candidates for Flinders in the coming federal election to align themselves against plans for a floating gas terminal at Crib Point. Independent Julia Banks – elected as a Liberal to the seat of Chisholm at the 2016 federal election – says she will table a petition next “to stop this development and to protect the Western Port (Crib Point) site”. In a news release, Ms Banks said plans by power company AGL to process liquified natural gas “will mean the discharge into the sea of vast amounts of chilled chlorinated water - the equivalent of 180 Olympic swimming pools a day”. A 55-kilometre-long pipeline to carry it to Pakenham “would cut through internationally significant wetlands and private properties. This project has the potential to cause air, light, noise and water pollution, present fire hazards and risk marine life and aquaculture”. Three other candidates for Flinders, sitting MP and Ms Banks’s former Liberal colleague, Greg Hunt, Labor’s Joshua Sinclair and independent Susie Beveridge, a former Mornington Peninsula Shire councillor, have also said they are opposed to AGL’s plans. In July last year Mr Hunt said he had “long argued that South Port [sic] is not the place for industrial development and my view hasn’t changed in a decade. This includes the AGL proposal for a floating storage regasification unit at Crib Point” (“Libs ‘united’

against gas plan” The News 10/7/18). Mr Hunt’s statement came one day short of four months since he was first asked by The News if he opposed AGL’s proposal, which involves mooring a 300-metre-long liquid to gas processing plant at Crib Point’s number two berth. Labor candidate for Flinders Joshua Sinclair, said he had been “advised” that no decision would be made on AGL until the completion of an environmental effects statement due in Sepetember. “Like my community, I oppose the proposed gas project at Crib Point,” Mr Sinclair said. “Over the past few months I have listened to the concerns of locals and I have worked hard to convey these concerns to the relevant state ministers as well as federal Labor’s shadow minister for the environment.” While pointing out that the Victorian Government was “the decision maker” Mr Sinclair committed to “being a strong voice for my community on this issue while we patiently await the outcome of this rigorous process”. Ms Beveridge, who announced her federal election bid last week, has been quick to emphasise that her sympathies are with the anti-AGL campaigners, citing the council’s role in stopping a bitumen plant “slated for Crib Point” “For me, [the fight to stop AGL] is history repeating. The EES for the channel deepening project in Port Phillip was deeply flawed, and we fought hard to stop works at the Rip, which altered the hydrology of the Heads, our protection against climate change,” she said. While not addressing the issue directly, the Australian Greens candidate

Gas delivery: An artist’s impression of the floating gas processing terminal and a tanker used to carry liquified natural gas from overseas to Crib Point.

for Flinders, Nathan Lesslie, said that “without the environment, no other life can exist. Therefore, the environment should in my opinion be considered the most precious of all things”.

“If you believe in 98 per cent of climate scientists, we need to take this incredibly seriously and have bi-partisan agreement which offers security to the private sector to then invest in renewable energy.”

Union leaders out against Hunt THE Victorian Trades Hall Council has announced it will specifically target Flinders MP Greg Hunt in the May federal election. Phone callers and door knockers will play on Mr Hunt’s role in the overthrow last year of then Prime Minister Malcolm Turnbull that led to Scott Morrison taking over leadership of the Liberal National government. Health Minister Mr Hunt sought to be deputy leader in the failed leadership bid by Home Affairs Minister Peter Dutton. The union umbrella group THC will also target Mr Hunt’s Liberal colleague, Chris Crewther in neighbouring Dunkley. The involvement of Trades Hall comes weeks after left wing lobby group GretUp! Also announced its intention to unseat Mr Hunt, citing his lack of action in dealing with climate change. Mr Hunt denies the claims (“Hunt a GetUp! ‘target’ in federal poll” The News 20/3/19). Flinders is seen as blue-ribbon Liberal territory - held by Mr Hunt since 2001 - and is being also being contested by high profile, former Liberal Julia Banks, former Mornington Peninsula Shire councillor Susie Beveridge, Labor’s Joshua Sinclair (campaign manager for Chris Brayne who won the “safe” Liberal state seat of Nepean for Labor last November) and the Australian Green, Nathan Lesslie. Labor is banking on Liberal voters still being angry over the way Mr Turnbull lost his job. Ms Banks has confirmed to The News that his son, Alex Turnbull, helped setting up some aspects of her campaign for Flinders. Keith Platt