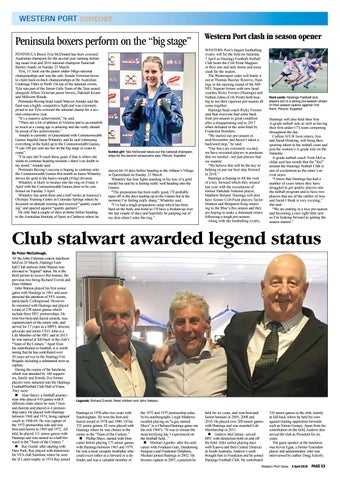 Peninsula boxers perform on the “big stage” PENINSULA Boxer Tyla McDonald has been crowned Australian champion for the second year running defeating usual rival and 2016 national champion Tameriah Barney-Sandy on Sunday 25 March. Tyla, 15, took out the junior under-54kgs national championships and was the only female Victorian boxer to claim back-to-back championships at the Australian Underage Titles in Perth. On top of the national crown, Tyla was part of the Junior Girls Team of the Year award, alongside fellow Victorian junior boxers, Dakotah Keane and Millicent Woods. Peninsula Boxing head coach Marcos Amado said the final was a highly competitive fight and was extremely proud to see Tyla crowned the national champ for a second consecutive year. “It’s a massive achievement,” he said. “There are a lot of athletes in Victoria and to accomplish so much at a young age is amazing and she really should be proud of her achievements.” Amado is currently in Queensland with Commonwealth Games hopeful Jason Whateley and he said witnessing everything in the build up to the Commonwealth Games, “I can 100 per cent see her on the big stage in years to come”. “I’m sure she’ll reach these goals if that is where she wants to continue heading towards – there’s no doubt in my mind,” Amado said. Peninsula Boxing’s success is hoping to continue onto the Commonwealth Games this month as Jason Whateley strives for gold in the heavy-weight (91kg) division. Whateley is likely to bounce into the ring on Friday 6 April with the Commonwealth Games draw to be confirmed on Tuesday 3 April. Whateley has spent three and a half weeks at America’s Olympic Training Centre in Colorado Springs where he focussed on altitude training and received “quality coaching” and sparred against “quality partners”. He only had a couple of days at home before heading to the Australian Institute of Sport in Canberra where he

stayed for 10 days before heading to the Athlete’s Village in Queensland on Sunday 25 March. Whateley has four fights standing in his way of a gold medal but said he is feeling really well heading into the Games. “The preparation has been really good, I’ll probably taper off in the days leading up to the Games but at the moment I’m feeling really sharp,” Whateley said. “I’ve had a tough preparation camp which has been hard on the body and mind so I’ll have a freshen-up over the last couple of days and hopefully be jumping out of my skin when I enter the ring.”

Western Port clash in season opener WESTERN Port’s largest footballing rivalry will hit the field on Saturday 7 April as Hastings Football-Netball Club hosts the Crib Point Magpies in their one and only home and away clash for the season. The Westernport sides will battle it out at Thomas Barclay Reserve, Hastings in the opening round of the MPNFL Nepean fixture with new head coaches Ricky Ferraro (Hastings) and Nathan Johns (Crib Point) both hoping to see their rigorous pre-season all come together. Hastings head coach Ricky Ferraro said that everyone had come back from pre-season in great condition after a disappointing end to 2017 when defeated in the semi-final by Frankston Bombers. “We started our pre-season in mid-November and haven’t taken a backward step,” he said. “Our boys are extremely excited, we have recruited players in positions that we needed - not just players that we wanted. “We believe this will be the key to helping us put our best step forward in 2018.” Hastings is hoping to fill the void of a key forward which they missed last year with the recruitment of former Parkdale Vultures player, Matthew Boland. Hastings will also have former Crib Point players Taylor Stratton and Benjamin King returning to the Blue’s this season and they are hoping to make a dominant return following a tough pre-season. Along with the footballing rivalry,

Hastings will also field their first A-grade netball side as well as having their first under-17’s team competing throughout the day. Carlton AFLW twin sisters, Jess and Sarah Hosking, will bring their sporting talent to the netball court and join the women’s A-grade side on the Saturday. A-grade netball coach Trish McLachlan said last month that the “feel” around the Hastings Netball Club is one of excitement as the sister’s arrival nears. “I know that Hastings has had a number of years where they have struggled to get quality players into the netball program and to have two players that are of the caliber of Jess and Sarah I think is very exciting,” she said. “We are putting in a nice pre-season and becoming a nice tight little unit so I’m looking forward to getting the season started.”

Club stalwart awarded legend status By Peter McCullough. AT the John Coleman coterie luncheon held on 26 March, Hastings Football Club stalwart John Watson was elevated to “legend” status. He is the third person to receive this honour, the previous two being Richard Everist and Peter Hibbert. John Watson played his first senior game with Hastings in 1961 and soon attracted the attention of VFL scouts, particularly Collingwood. However he remained with Hastings and played a total of 278 senior games which include three HFC premierships. He won two best-and-fairest awards, was captain/coach of the senior side, and served for 17 years as a MPFL director, advocate and senior CEO. John is a Life Member of the HFC and in 2013 he was named at full-back in the club’s “Team of the Century.” Apart from his contribution to football, it is worth noting that he has contributed over 50 years service to the Hastings Fire Brigade including a substantial term as captain. During the course of the luncheon, which was attended by 160 supporters, family and friends, five former players were inducted into the Hastings Football/Netball Club Hall of Fame. They were: n Alan Hayes: a football journeyman who played 410 games with 8 different clubs where he won 7 bestand-fairests and played in 4 premiership sides. He played with Hastings between 1968 and 1974, being captain/ coach in 1968-69. He was captain of the 1972 premiership side and was best-and-fairest in 1969 and 1972. All told, he played 111 senior games with Hastings and was named as a half-forward in the “Team of the Century.” n Ray Goold: after starting with Deer Park, Ray played with distinction for VFA club Sunshine where he won the JJ Liston trophy in 1974.Ray joined

Hastings in 1978 after two years with Sandringham. He won the best-and fairest award in 1978 and 1980. Of his 322 senior games, 92 were played with Hastings where he was chosen in the centre in the “Team of the Century.” n Phillip Mays: started with Doncaster before playing 175 senior games with Hastings between 1965 and 1979. He was a most versatile footballer who could excel either as a forward or a defender and was a valuable member of

the 1972 and 1975 premiership sides. In his autobiography Leigh Mathews recalled playing on “a guy named Mays” in a Chelsea-Hastings game inn the mid 1960’s: “It was to remain the most terrifying day I experienced on the football field...” n Michael Agnello: after his early career with Fountain Gate, Dandenong Stingrays and Frankston Dolphins, Michael joined Hastings in 2002. He became captain in 2007, a position he

held for six years, and won best-andfairest honours in 2005, 2008 and 2010. He played over 200 senior games with Hastings and was awarded Life Membership in 2011. n Andrew McCartney: served HFC with distinction both on and off the field. After earlier playing days with Kaniva and then Central Districts in South Australia, Andrew’s work brought him to Frankston and he joined Hastings Football Club. He contributed

110 senior games to the club, mainly at full-back where he held his own against leading opposition forwards such as Simon Goosey. Apart from his contribution on the field, Andrew also served the club as President for six years. The guest speaker at the luncheon was Kevin Egan, a former Essendon player and administrator, who was interviewed by author Doug Ackerly.