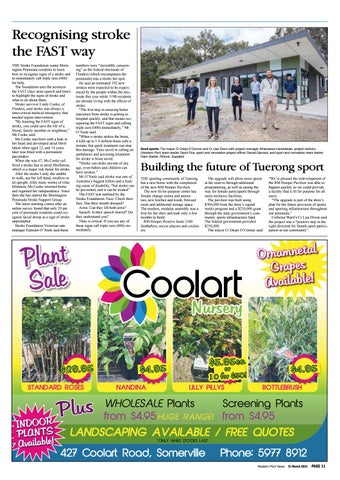 Recognising stroke the FAST way THE Stroke Foundation wants Mornington Peninsula residents to learn how to recognise signs of a stroke and to immediately call triple zero (000) for help. The foundation uses the acronym the FAST (face arms speech and time) to highlight the signs of stroke and what to do about them. Stroke survivor Lindy Cooke, of Flinders, said stroke was always a time-critical medical emergency that needed urgent intervention. “By learning the FAST signs of stroke, you could save the life of a friend, family member or neighbour,” Ms Cooke said. Ms Cooke was born with a hole in her heart and developed atrial fibrillation when aged 12, and 14 years later was fitted with a permanent pacemaker. When she was 47, Ms Cooke suffered a stroke due to atrial fibrillation, which is a major risk factor for stroke. After the stroke Lindy she unable to walk, use her left hand, swallow or sit upright. After many weeks of rehabilitation, Ms Cooke returned home and regained her independence. Since then she has started the Mornington Peninsula Stroke Support Group. The latest warning comes after an online survey found that only 29 per cent of peninsula residents could recognise facial droop as a sign of stroke unprompted. Stroke Foundation Victorian sate manager Eamonn O’Toole said these

numbers were “incredibly concerning” as the federal electorate of Flinders (which encompasses the peninsula) was a stroke hot spot. He said an estimated 192 new strokes were expected to be experienced by the people within the electorate this year while 3198 residents are already living with the effects of stroke. “The first step in ensuring better outcomes from stroke is getting to hospital quickly, and that means recognising the FAST signs and calling triple zero (000) immediately,’’ Mr O’Toole said. “When a stroke strikes the brain, it kills up to 1.9 million brain cells a minute, but quick treatment can stop this damage. Time saved in calling an ambulance and accessing treatment for stroke is brain saved. “Stroke can strike anyone of any age, even babies and children can have strokes.” Mr O’Toole said stroke was one of Australia’s biggest killers and a leading cause of disability, “but stroke can be prevented, and it can be treated”. The FAST test outlined by the Stroke Foundation: Face: Check their face. Has their mouth drooped? Arms: Can they lift both arms? Speech: Is their speech slurred? Do they understand you? Time is critical. If you see any of these signs call triple zero (000) immediately.

Building the future of Tuerong sport THE sporting community of Tuerong has a new home with the completion of the new RM Hooper Pavilion. The new fit-for-purpose centre has female change rooms and amenities, new kitchen and kiosk, first-aid room and additional storage space. The modern, modular assembly was a first for the shire and took only a few months to build. RM Hooper Reserve hosts 2100 footballers, soccer players and cricketers.

The upgrade will allow more sports at the reserve through additional programming, as well as easing the way for female participants through more-inclusive facilities. The pavilion was built using $760,000 from the shire’s capital works program and a $250,000 grant through the state government’s community sports infrastructure fund. The federal government provided $250,000. The mayor Cr Despi O’Connor said:

“We’re pleased the redevelopment of the RM Hooper Pavilion was able to happen quickly so we could provide a facility that is fit for purpose for all users. “The upgrade is part of the shire’s plan for the future provision of sports and sporting infrastructure throughout our peninsula.” Cerberus Ward’s Cr Lisa Dixon said the project was a “positive step in the right direction for female sport participation in our community”.