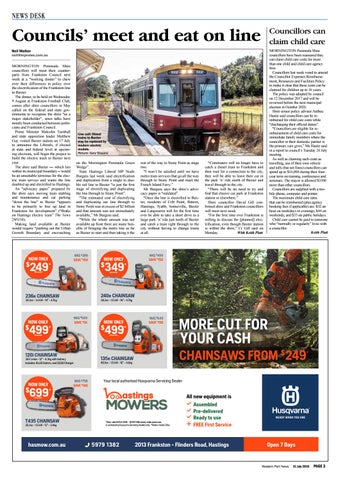 Councils’ meet and eat on line

MORNINGTON Peninsula Shire councillors have been reassured they can claim child care costs for more than one child and child care agency fees. Councillors last week voted to amend the Councillor Expenses Reimbursement, Resources and Facilities Policy to make it clear that these costs can be claimed for children up to 16 years. The policy was adopted by council on 12 December 2017 and will be reviewed before the next municipal election in October 2020. Shire senior policy advisor Anthea Hastie said councillors can be reimbursed for child care costs while “discharging their official duties”. “Councillors are eligible for reimbursement of child care costs for immediate family members where the councillor or their domestic partner is the primary care giver,” Ms Hastie said in a report to council’s Tuesday 24 July meeting. As well as claiming such costs as travelling, use of their own vehicle and tolls (but not fines) councillors can spend up to $16,000 during their fouryear term on training, conferences and seminars. The mayor is allowed $3500 more than other councillors. Councillors are supplied with a mobile phone, computer and printer. The maximum child care rates that can be reimbursed (plus agency booking fees if applicable) are: $32 an hour on weekdays or evenings; $44 on weekends; and $55 on public holidays. Child care cannot be paid to someone who “normally or regularly” lives with a councillor. Keith Platt

MORNINGTON Peninsula Shire councillors will meet their counterparts from Frankston Council next week at a “working dinner” to chew over their differences in policy over the electrification of the Frankston line to Baxter. The dinner, to be held on Wednesday 9 August at Frankston Football Club, comes after shire councillors in May called on the federal and state governments to recognise the shire “as a major stakeholder”, since talks have mostly been conducted between politicians and Frankston Council. Prime Minister Malcolm Turnbull and state opposition leader Matthew Guy visited Baxter station on 17 July to announce the Liberals, if elected at state and federal level at upcoming elections, will begin the project to build the electric track to Baxter next year. The shire said Baxter — which lies within its municipal boundary – would be an unsuitable terminus for the electric train service and wants the line doubled up and electrified to Hastings. An “advocacy paper” prepared by the shire says moving train stabling and maintenance and car parking “down the line” to Baxter “appears to be primarily to free up land in Frankston for development” (“Brake on Hastings electric train” The News 29/5/18). Making land available at Baxter would require “pushing out the Urban Growth Boundary and encroaching

on the Mornington Peninsula Green Wedge”. State Hastings Liberal MP Neale Burgess last week said electrification and duplication from a single to double rail line to Baxter “is just the first stage of electrifying and duplicating the line through to Stony Point”. “The estimated cost of electrifying and duplicating our line through to Stony Point was in excess of $2 billion and that amount was not immediately available,” Mr Burgess said. “While the whole amount was not available up front there are many benefits of bringing the metro line as far as Baxter to start and then taking it the

“Commuters will no longer have to catch a diesel train to Frankston and then wait for a connection to the city, they will be able to leave their car in the park ’n’ ride north of Baxter and travel through to the city. “There will be no need to try and find that elusive car park at Frankston station or elsewhere.” Shire councillor David Gill confirmed shire and Frankston councillors will meet next week. "For the first time ever Frankston is willing to discuss the [planned] electrification, even though Baxter station is within the shire," Cr Gill said on Monday. With Keith Platt

rest of the way to Stony Point as stage two. “I won’t be satisfied until we have metro train services that go all the way through to Stony Point and meet the French Island Ferry.” Mr Burgess says the shire’s advocacy paper is “outdated”. “Once the line is electrified to Baxter, residents of Crib Point, Bittern, Hastings, Tyabb, Somerville, Baxter and Langwarrin will for the first time ever be able to take a short drive to a large park ’n’ ride just north of Baxter and catch a train right through to the city without having to change trains at all.