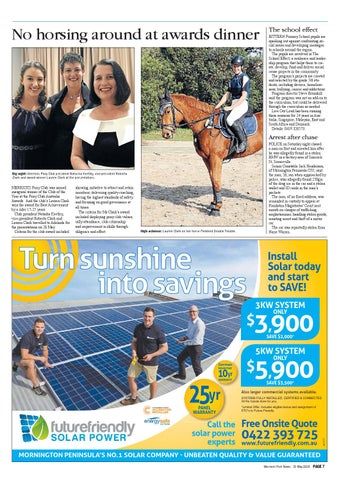 No horsing around at awards dinner

The school effect BITTERN Primary School pupils are speaking out against confronting social issues and developing messages to schools around the region. The pupils are involved in The School Effect, a resilience and leadership program that helps them to create, develop, fund and deliver social cause projects in the community. The program’s projects are created and selected by the grade 5/6 students, including divorce, homelessness, bullying, cancer and addictions. Program director Steve Brunskill said the program was not an add-on to the curriculum, but could be delivered through the curriculum as needed. Live Out Loud has been running these sessions for 24 years in Australia, Singapore, Malaysia, East and South Africa and Denmark. Details: 0419 326573.

MERRICKS Pony Club was named inaugural winner of the Club of the Year at the Pony Club Australia Awards. And the club’s Lauren Clark won the award for Best Achievement by a rider 17-25 years. Club president Natasha Keetley, vice-president Roberta Clark and Lauren Clark travelled to Adelaide for the presentations on 28 May. Criteria for the club award included

showing initiative to attract and retain members, delivering quality coaching, having the highest standards of safety and focusing on good governance at all times. The criteria for Ms Clark’s award included displaying pony club values, rally attendance, club citizenship and improvement in skills through diligence and effort.

POLICE on Saturday night chased a man on foot and arrested him after he was allegedly found in a stolen BMW in a factory area of Simcock St, Somerville. Senior Constable Jack Henderson, of Mornington Peninsula CIU, said the man, 26, ran when approached by police, who allegedly found 250gm of the drug ice in the car and a stolen wallet and ID cards in the man’s pockets. The man, of no fixed address, was remanded in custody to appear at Frankston Magistrates’ Court next month on charges of trafficking amphetamines, handling stolen goods, resisting arrest and theft of a motor car. The car was reportedly stolen from Narre Warren.

Install Solar today and start to SAVE! 3KW SYSTEM ONLY