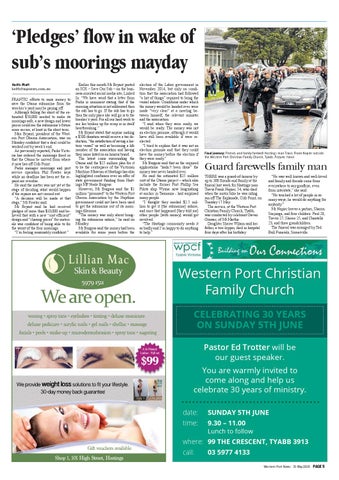 ‘Pledges’ flow in wake of sub’s moorings mayday Keith Platt keith@mpnews.com.au FRANTIC efforts to raise money to save the Otama submarine from the wrecker’s yard may be paying off. Although falling far short of the estimated $50,000 needed to make its moorings safe, a new design and lower prices could see the submarine’s future more secure, at least in the short term. Max Bryant, president of the Western Port Oberon Association, was on Monday confident that a deal could be worked out by week’s end. As previously reported, Parks Victoria has ordered the moorings fixed or that the Otama be moved from where it now lies off Crib Point. Parks manager moorings and port service operation Phil Fowler says while no deadline has been set the repairs are overdue. He said the matter was not yet at the stage of deciding what would happen if the repairs are not carried out. “A decision will be made at that stage,” Mr Fowler said. Mr Bryant said he had received pledges of more than $10,000 and believed that with a new “cost efficient” design and “chasing prices” for materials was confident of being able to fix the worst of the four moorings. “I’m feeling reasonably confident.”

Earlier this month Mr Bryant posted an SOS – Save Our Sub – on the business-oriented social media site, Linked In: “We have word that a letter from Parks is imminent stating that if the mooring situation is not addressed then the sub has to go. If the sub has to go then the only place she will go is to the breaker’s yard. For all our hard work to see her broken up for scrap is in itself heartbreaking.” Mr Bryant stated that anyone making a $500 donation would receive a tax deduction, “the satisfaction of saving a historic vessel” as well as becoming a life member of the association and having their name listed on an honour board. The latest crisis surrounding the Otama and the $25 million plan for it to be the centrepiece of the Victorian Maritime Museum at Hastings has also highlighted confusion over an offer of state government funding from Hastings MP Neale Burgess. However, Mr Burgess said the $1 million “promised” to the Western Port Oberon Association by the Napthine government could not have been used to get the submarine out of its moorings dilemma. “The money was only about bringing the submarine ashore,” he said on Monday. Mr Burgess said the money had been available for some years before the

election of the Labor government in November 2014, but only on condition that the association had followed “a list of things” required to bring the vessel ashore. Conditions under which the money would be handed over were made “very clear” at a meeting between himself, the relevant minister and the association. “I said when they were ready, we would be ready. The money was not an election promise, although it would have still been available if were reelected. “I tried to explain that it was not an election promise and that they could have the money before the election if they were ready.” Mr Burgess said that as the required applications “hadn’t been done” the money was never handed over. He said the estimated $25 million cost of the Otama project – which also include the former Port Phillip Sea Pilots ship Wyuna now languishing at anchor in Tasmania - had surprised many people. “I thought they needed $2.5 million to get it [the submarine] ashore, and once that happened [they told me] other people [with money] would get involved. “The Hastings community needs it so badly and I’m happy to do anything to help.”

Guard farewells family man THERE was a guard-of-honour by up to 300 friends and family at the funeral last week for Hastings man Travis Frank Napier, 54, who died when the motor bike he was riding ran off The Esplanade, Crib Point, on Tuesday 17 May. The service, at the Western Port Christian Family Church, Tyabb, was conducted by celebrant Gavan Grosser, of Mt Martha. Daughter Sheree Wilson said her father, a tree-lopper, died in hospital four days after his birthday.

“He was well known and well-loved and family and friends came from everywhere to say goodbye, even from interstate,” she said. “He touched a lot of people in so many ways; he would do anything for anybody.” Mr Napier leaves a partner, Sharon Szejnoga, and four children: Paul 28, Trevor 27, Sheree 25, and Chantelle 23, and three grandchildren. The funeral was arranged by Ted Bull Funerals, Somerville.

Western Port Christian Family Church CELEBRATING 30 YEARS ON SUNDAY 5TH JUNE Pastor Ed Trotter will be our guest speaker. You are warmly invited to come along and help us celebrate 30 years of ministry. date: