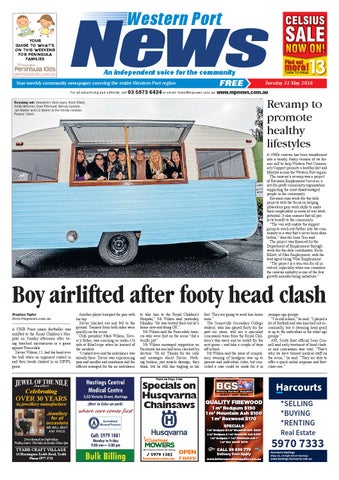 A 1960s caravan has been transformed into a trendy, funky version of its former self to help Western Port Community Support promote a healthy diet and lifestyle across the Western Port region. The caravan’s revamp was a project of Envision Employment Services, a not-for-profit community organisation supporting the most disadvantaged people in the community. Envision runs work-for-the-dole projects with the focus on helping jobseekers gain work skills to make them employable in areas of real work potential. It also ensures that all projects benefit to the community. “The van will enable the support group to reach out further into the community in a way that’s never been done before,” director Sean Teer said. The project was financed by the Department of Employment through work-for-the-dole coordinator, Nicki Elliott, of Max Employment, with the lead agent being Wise Employment. “The project is a win-win for all involved, especially when one considers the caravan industry is one of the few growth manufacturing industries.”

Boy airlifted after footy head clash Stephen Taylor steve@mpnews.com.au A CRIB Point junior footballer was airlifted to the Royal Children’s Hospital on Sunday afternoon after being knocked unconscious in a game against Pearcedale. Xavier Wilson, 12, had his head over the ball when an opponent rushed in and their heads clashed in an MPJFL game.

Another player bumped the pair with his hip. Xavier blacked out and fell to the ground. Trainers from both sides were quickly on the scene. Club president Mark Wilson, Xavier’s father, was coaching an under-15s side at BlueScope when he learned of the incident. “I rushed over and the ambulance was already there. Xavier was experiencing pins and needles and numbness and the officers arranged for the air ambulance

to take him to the Royal Children’s Hospital,” Mr Wilson said yesterday, Monday. “He was treated there but he’s home now and doing OK.” Mr Wilson said the Pearcedale trainers who were first on the scene “did a terrific job”. Mr Wilson messaged supporters on Facebook his son had been checked by doctors: “Hi all. Thanks for the calls and messages about Xavier. Nothing broken, just muscle damage, they think, but he still has tingling in his

feet. They are going to send him home soon.” The Somerville Secondary College student, who has played footy for the past six years, will see a specialist concussion team from the Royal Children’s this week and be rested for the next game – and take a couple of days off school. Mr Wilson said the issue of compulsory wearing of headgear was up to parents and individual clubs, but conceded a case could be made for it in

younger age groups. “I’m old school,” he said. “I played a lot of football and was knocked out occasionally, but it [wearing head gear] is up to the individual in the older age groups.” AFL South East official Sean Connell said early treatment of head clashes and concussion was vital. “That’s why we have trained medical staff on the scene,” he said. “They are able to offer a quick initial response and firstclass care.”

Turn to Page 3 for

WE WILL BEAT ANY PRICE Drive through to Craft village Trading hours: Thursday to Sunday 10am-5pm