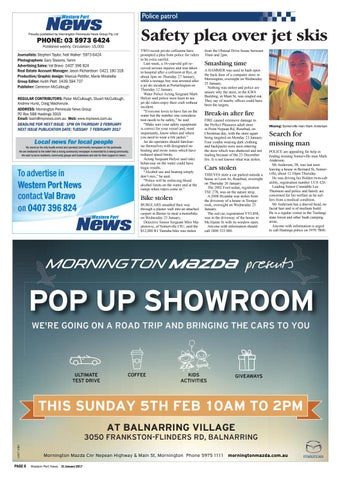 TWO recent jet-ski collisions have prompted a plea from police for riders to be extra careful. Last week, a 16-year-old girl received serious injuries and was taken to hospital after a collision at Rye, at about 3pm on Thursday 27 January, while a teenage boy was arrested after a jet ski incident at Portarlington on Thursday 12 January. Water Police Acting Sergeant Mark Helyer said police were keen to see jet ski riders enjoy their craft without incident. “Everyone loves to have fun on the water but the number one consideration needs to be safety,” he said. “Make sure your safety equipment is correct for your vessel and, most importantly, know when and where you need to wear a life jacket.” Jet ski operators should familiarise themselves with designated no boating and swim zones which have reduced speed limits. Acting Sergeant Helyer said risky behaviour on the water could have tragic results. “Alcohol use and boating simply don’t mix,” he said. “Police will be enforcing blood alcohol limits on the water and at the ramps when riders come in.”

BURGLARS smashed their way through a plaster wall into an attached carport in Baxter to steal a motorbike on Wednesday 25 January. Detective Senior Sergeant Miro Majstorovic, of Somerville CIU, said the $12,000 R1 Yamaha bike was stolen

from the Olstead Drive house between 10am and 2pm.

Smashing time A HAMMER was used to bash open the back door of a computer store in Mornington, overnight on Wednesday 25 January. Nothing was stolen and police are unsure why the store, in the KWA Building, in Main St, was singled out. They say of nearby offices could have been the targets.

Break-in after fire FIRE caused extensive damage to the Perfect Pleasures adult store in Point Nepean Rd, Rosebud, on Christmas day, with the store again being targeted on Monday 23 January. Four youths wearing dark clothing and backpacks were seen entering the store which was shuttered and not trading because of the 25 December fire. It is not known what was stolen.

Cars stolen THIEVES stole a car parked outside a house in Leon Av, Rosebud, overnight on Thursday 26 January. The 2002 Ford sedan, registration TSE 278, was on the nature strip. A 2008 Hyundai was stolen from the driveway of a house in Tootgarook, overnight on Wednesday 25 January. The red car, registration YYL858, was in the driveway of the house in McAlpine St with its window open. Anyone with information should call 1800 333 000.

Search for missing man POLICE are appealing for help in finding missing Somerville man Mark Anderson. Mr Anderson, 38, was last seen leaving a house in Bernard St, Somerville, about 12.10pm Thursday. He was driving his Holden twin-cab utility, registration number UUS 420. Leading Senior Constable Lee Thomson said police and family are concerned for his welfare as he suffers from a medical condition. Mr Anderson has a shaved head, no facial hair and is of medium build. He is a regular visitor to the Toolangi state forest and other bush camping areas. Anyone with information is urged to call Hastings police on 5970 7800.