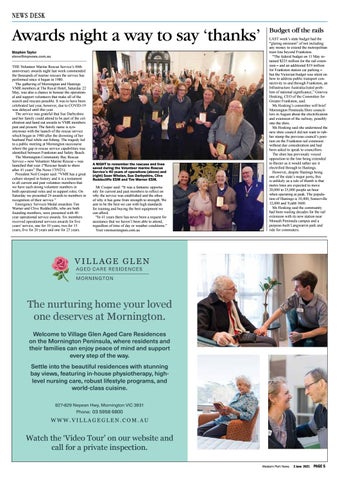 Awards night a way to say ‘thanks’ Stephen Taylor steve@mpnews.com.au THE Volunteer Marine Rescue Service’s 40th anniversary awards night last week commended the thousands of marine rescues the service has performed since it began in 1980. The gathering of Mornington and Hastings VMR members at The Royal Hotel, Saturday 22 May, was also a chance to honour the operational and support volunteers that make all of the search and rescues possible. It was to have been celebrated last year, however, due to COVID-19 was delayed until this year. The service was grateful that Sue Darbyshire and her family could attend to be part of the celebration and hand out awards to VMR members past and present. The family name is synonymous with the launch of the rescue service which began in 1980 after the drowning of her husband Paul while out fishing. The tragedy led to a public meeting at Mornington racecourse where the gap in rescue service capabilities was identified between Frankston and Safety Beach. The Mornington Community Bay Rescue Service – now Volunteer Marine Rescue – was launched that year. (“Rescuer heads to shore after 41 years” The News 17/5/21). President Neil Cooper said: “VMR has a great culture steeped in history and it is a testament to all current and past volunteer members that we have such strong volunteer numbers in both operational roles and in support roles. On Saturday we presented 24 awards to members in recognition of their service.” Emergency Services Medal awardees Tim Warner and Clive Reddecliffe, who are both founding members, were presented with 40 year operational service awards. Six members received operational services awards for five years’ service, one for 10 years, two for 15 years, five for 20 years and one for 25 years.

A NIGHT to remember the rescues and lives saved during the Volunteer marine Rescue Service’s 40 years of operations (above) and (right) Sean Whelan, Sue Darbyshire, Clive Reddecliffe ESM and Tim Warner ESM. Mr Cooper said: “It was a fantastic opportunity for current and past members to reflect on why the service was established and the ethos of why it has gone from strength to strength. We aim to be the best we can with high standards for training and buying the best equipment we can afford. “In 41 years there has never been a request for assistance that we haven’t been able to attend, regardless of time of day or weather conditions.” Visit vmrmornington.com.au

Budget off the rails LAST week’s state budget had the “glaring omission” of not including any money to extend the metropolitan train line beyond Frankston. “The federal budget on 11 May retained $225 million for the rail extension – and an additional $19 million for Frankston station car parking – but the Victorian budget was silent on how to address public transport connectivity to and through Frankston, an Infrastructure Australia-listed problem of national significance,” Ginevra Hosking, CEO of the Committee for Greater Frankston, said. Ms Hosking’s committee will brief Mornington Peninsula Shire councillors in August about the electrification and extension of the railway, possibly into the shire. Ms Hosking said she understood the new shire council did not want to rubber stamp the previous council’s position on the Frankston rail extension without due consideration and had been asked to speak to councillors. The shire has previously voiced opposition to the line being extended to Baxter as it would rather see it electrified through to Hastings. However, despite Hastings being one of the state’s major ports, this is unlikely as a rule of thumb is that metro lines are expected to move 20,000 to 25,000 people an hour when operating at peak. The population of Hastings is 10,400, Somerville 12,000 and Tyabb 3600. Ms Hosking said the community had been waiting decades for the rail extension with its new station near Monash Peninsula campus and a purpose-built Langwarrin park and ride for commuters.

The nurturing home your loved one deserves at Mornington. Welcome to Village Glen Aged Care Residences on the Mornington Peninsula, where residents and their families can enjoy peace of mind and support every step of the way. Settle into the beautiful residences with stunning bay views, featuring in-house physiotherapy, highlevel nursing care, robust lifestyle programs, and world-class cuisine. 827-829 Nepean Hwy, Mornington VIC 3931 Phone: 03 5958 6800

Watch the ‘Video Tour’ on our website and call for a private inspection. Western Port News