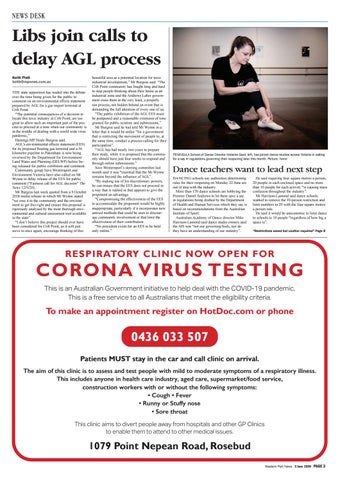 Libs join calls to delay AGL process Keith Platt keith@mpnews.com.au THE state opposition has waded into the debate over the time being given for the public to comment on an environmental effects statement prepared by AGL for a gas import terminal at Crib Point. “The potential consequences of a decision to locate this toxic industry at Crib Point, are too great to allow such an important part of the process to proceed at a time when our community is in the middle of dealing with a world wide virus pandemic,” Hastings MP Neale Burgess said. AGL’s environmental effects statement (EES) for its proposed floating gas terminal and a 56 kilometre pipeline to Pakenham is now being reviewed by the Department for Environment Land Water and Planning (DELWP) before being released for public exhibition and comment. Community group Save Westernport and Environment Victoria have also called on Mr Wynne to delay release of the EES for public comment (“Fairness call for AGL decision” The News 12/5/20). Mr Burgess last week quoted from a 9 October 2018 media release in which Mr Wynne stated “we owe it to the community and the environment to get this right and ensure this proposal is rigorously analysed by the most thorough environmental and cultural assessment tool available in the state”. “I don’t believe this project should ever have been considered for Crib Point, as it will just serve to once again, encourage thinking of this

beautiful area as a potential location for toxic industrial development,” Mr Burgess said. “The Crib Point community has fought long and hard to stop people thinking about their home as an industrial zone and the Andrews Labor government owes them at the very least, a properly run process, not hidden behind an event that is demanding the full attention of every one of us. “The public exhibition of the AGL EES must be postponed and a reasonable extension of time granted for public scrutiny and submissions.” Mr Burgess said he had told Mr Wynne in a letter that it would be unfair “for a government that is restricting the movement of people to, at the same time, conduct a process calling for their participation”. “AGL has had nearly two years to prepare their study, while it is proposed that the community should have just four weeks to respond and through online submissions.” Save Westernport’s steering committee last month said it was “essential that the Mr Wynne remains beyond the influence of AGL”. “By making use of his discretionary powers, he can ensure that the EES does not proceed in a way that is rushed or that appears to give the proponent an advantage. “Compromising the effectiveness of the EES to accommodate the proponent would be highly inappropriate, particularly if it incorporates new untried methods that could be seen to discourage community involvement or that limit the effectiveness of their contribution. “No precedent exists for an EES to be held only online.”

PENINSULA School of Dance Director Melanie Gard, left, has joined dance studios across Victoria in calling for a say in regulations governing their reopening later this month. Picture: Yanni

Dance teachers want to lead next step DANCING schools say authorities determining rules for their reopening on Monday 22 June are out of step with the industry. More than 170 dance schools are lobbying the Premier Daniel Andrews to let them save a say in regulations being drafted by the Department of Health and Human Services which they say is based on recommendations from the Australian Institute of Sport. Australian Academy of Dance director Mike Harrison-Lamond said dance studio owners said the AIS was “not our governing body, nor do they have an understanding of our industry”.

He said requiring four square metres a person, 20 people in each enclosed space and no more than 10 people for each activity “is causing mass confusion throughout the industry”. Mr Harrison-Lamond said dance schools wanted to remove the 10-person restriction and limit numbers to 20 with the four square metres a person rule. He said it would be uneconomic to limit dance to schools to 10 people “regardless of how big a space is”. “Restrictions eased but caution required” Page 8