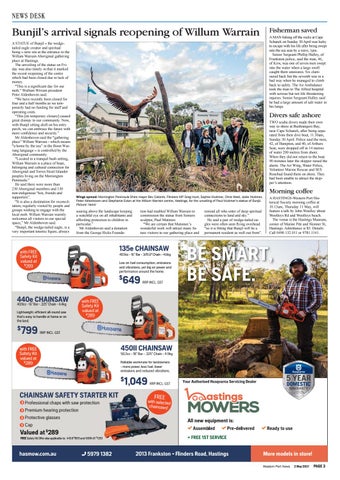 TWO scuba divers made their own way to shore at Bushrangers Bay, near Cape Schanck, after being separated from their dive boat, 11.30am, Sunday 30 April. Police said the men, 42, of Hampton, and 40, of Arthurs Seat, were dropped off in 14 metres of water 200 metres from shore. When they did not return to the boat 90 minutes later the skipper raised the alarm. The Air Wing, Water Police, Volunteer Marine Rescue and SES Rosebud found them on shore. They had been unable to attract the skipperâ&#x20AC;&#x2122;s attention.

soaring above the landscape keeping a watchful eye on all inhabitants and affording protection to children in particular.â&#x20AC;? Mr Aldenhoven said a donation from the George Hicks Founda-

tion had enabled Willum Warrain to commission the statue from Somers sculptor, Paul Mutimer. â&#x20AC;&#x153;We are certain that Mutomerâ&#x20AC;&#x2122;s wonderful work will attract many future visitors to our gathering place and

/LJKWZHLJKWHIĂ&#x20AC;FLHQWDOOURXQGVDZ thatâ&#x20AC;&#x2122;s easy to handle at home or on the land.

A MAN fishing off the rocks at Cape Schanck on Sunday 30 April was lucky to escape with his life after being swept into the sea seas by a wave, 1pm. Senior Sergeant Phillip Hulley, of Frankston police, said the man, 46, of Kew, was one of seven men swept into the water when a large swell caught them unawares. Six clamoured back but the seventh was in a bad way when he managed to climb back to safety. The Air Ambulance took the man to The Alfred hospital with serious but not life threatening injuries. Senior Sergeant Hulley said he had a large amount of salt water in his lungs.

remind all who enter of deep spiritual connections to land and sky.â&#x20AC;? He said a pair of wedge-tailed eagles were often seen flying overhead â&#x20AC;&#x153;so it is fitting that Bunjil will be a permanent resident as well out frontâ&#x20AC;?.

A HASTINGS-Western Port Historical Society morning coffee at 10.15am, Thursday 11 May, will feature a talk by John Woolley about Woolleys Rd and Woolleys beach. The venue is the Hastings Museum, corner of Marine Pde and Skinner St, Hastings. Admittance is $5. Details: Call 0490 132 011 or 9781 1141.

BE SMART, BE SAFE.

All new equipment is: