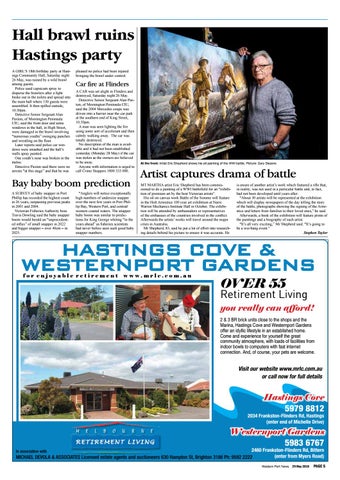 Hall brawl ruins Hastings party A GIRL’S 18th birthday party at Hastings Community Hall, Saturday night 26 May, was ruined by a wild brawl among guests. Police used capsicum spray to disperse the brawlers after a fight broke out in the toilets and spread into the main hall where 150 guests were assembled. It then spilled outside, 10.30pm. Detective Senior Sergeant Alan Paxton, of Mornington Peninsula CIU, said the front door and some windows in the hall, in High Street, were damaged in the brawl involving “numerous youths” swinging punches and wrestling on the floor. Later reports said police car windows were smashed and the hall’s walls spray painted. One youth’s nose was broken in the melee. Detective Paxton said there were no arrests “at this stage” and that he was

pleased no police had been injured bringing the brawl under control.

Car fire at Flinders A CAR was set alight in Flinders and destroyed, Saturday night 26 May. Detective Senior Sergeant Alan Paxton, of Mornington Peninsula CIU, said the 2004 Mercedes coupe was driven into a barrier near the car park at the southern end of King Street, 10.50pm. A man was seen lighting the fire using some sort of accelerant and then calmly walking away. The car was totally destroyed. No description of the man is available and it had not been established yesterday (Monday 28 May) if the car was stolen as the owners are believed to be away. Anyone with information is urged to call Crime Stoppers 1800 333 000.

Bay baby boom prediction A SURVEY of baby snapper in Port Phillip has recorded the highest count in 26 years, surpassing previous peaks in 2001 and 2004. Victorian Fisheries Authority boss Travis Dowling said the baby snapper boom would herald an “unprecedented influx” of small snapper in 2022 and bigger snapper – over 40cm – in 2025.

“Anglers will notice exceptionally high numbers of undersize snapper over the next few years in Port Phillip Bay, Western Port, and central/ western coastal waters. The snapper baby boom was similar to predictions for King George whiting “in the years ahead” as fisheries scientists had never before seen such good baby snapper numbers.

Artist captures drama of battle MT MARTHA artist Eric Shepherd has been commissioned to do a painting of a WWI battlefield for an “exhibition of premium art by the best Victorian artists”. His oil on canvas work Battle of the Somme will feature in the Holt Armistice 100 year art exhibition at Narre Warren Mechanics Institute Hall in October. The exhibition will be attended by ambassadors or representatives of the embassies of the countries involved in the conflict. Afterwards the artists’ works will travel around the major cities in Australia. Mr Shepherd, 83, said he put a lot of effort into researching details behind his picture to ensure it was accurate. He

is aware of another artist’s work which featured a rifle that, in reality, was not used in a particular battle and, in fact, had not been developed until years after. “About 30 artists will be represented at the exhibition which will display newspapers of the day telling the story of the battle, photographs showing the signing of the Armistice and letters from families to their loved ones,” he said. Afterwards, a book of the exhibition will feature prints of the paintings and a biography of each artist. “It’s all very exciting,” Mr Shepherd said. “It’s going to be a wiz-bang event.” Stephen Taylor

Retirement Living you really can afford! 2 &amp; 3 BR brick units close to the shops and the Marina, Hastings Cove and Westernport Gardens offer an idyllic lifestyle in an established home. Come and experience for yourself the great community atmosphere, with loads of facilities from indoor bowls to computers with fast internet connection. And, of course, your pets are welcome.