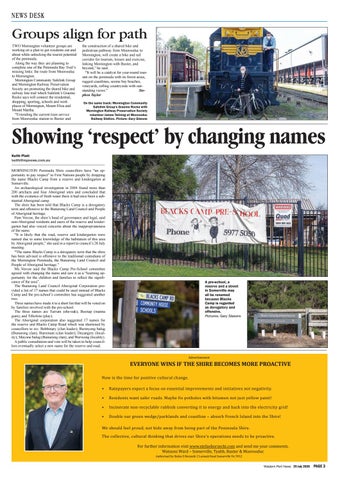 Groups align for path TWO Mornington volunteer groups are working on a plan to get residents out and about while unlocking the tourist potential of the peninsula. Along the way they are planning to complete one of the Peninsula Bay Trail’s missing links: the route from Moorooduc to Mornington. Mornington Community Safelink Group and Mornington Railway Preservation Society are promoting the shared bike and railway line trail which Safelink’s Graeme Rocke says will connect the residential, shopping, sporting, schools and work places of Mornington, Mount Eliza and Mount Martha. “Extending the current train service from Moorooduc station to Baxter and

the construction of a shared bike and pedestrian pathway from Moorooduc to Mornington, will create a bike and rail corridor for tourism, leisure and exercise, linking Mornington with Baxter, and beyond,” he said. “It will be a catalyst for year-round tourism on the peninsula with its forest areas, rugged coastlines, serene bay beaches, vineyards, rolling countryside with outstanding views.” Stephen Taylor On the same track: Mornington Community Safelink Group’s Graeme Rocke with Mornington Railway Preservation Society volunteer James Twining at Moorooduc Railway Station. Picture: Gary Sissons

Showing ‘respect’ by changing names Keith Platt keith@mpnews.com.au MORNINGTON Peninsula Shire councillors have “an opportunity to pay respect” to First Nations people by dropping the name Blacks Camp from a reserve and kindergarten at Somerville. An archaeological investigation in 2004 found more than 200 artefacts and four Aboriginal sites and concluded that with the existence of fresh water there it had once been a substantial Aboriginal camp. The shire has been told that Blacks Camp is a derogatory term and offensive to the Bunurong Land Council and People of Aboriginal heritage. Pam Vercoe, the shire’s head of governance and legal, said non-Aboriginal residents and users of the reserve and kindergarten had also voiced concerns about the inappropriateness of the name. “It is likely that the road, reserve and kindergarten were named due to some knowledge of the habitation of this area by Aboriginal people,” she said in a report to council’s 28 July meeting. “The name Blacks Camp is a derogatory term that the shire has been advised is offensive to the traditional custodians of the Mornington Peninsula, the Bunurong Land Council and People of Aboriginal heritage.” Ms Vercoe said the Blacks Camp Pre-School committee agreed with changing the name and saw it as a “learning opportunity for the children and families to reflect the significance of the area”. The Bunurong Land Council Aboriginal Corporation provided a list of 17 names that could be used instead of Blacks Camp and the pre-school’s committee has suggested another two. Three names have made it to a short list that will be voted on by families involved with the pre-school. The three names are Turrum (she-oak); Beenap (manna gum); and Tillerkite (play). The Aboriginal corporation also suggested 17 names for the reserve and Blacks Camp Road which was shortened by councillors to six: Bobbinary (clan leader); Burinyong balug (Bunurong clan); Burrenum (clan leader); Decangery (locality); Mayone balug (Bunurong clan); and Worwong (locality). A public consultation and vote will be taken to help councillors eventually select a new name for the reserve and road.

A pre-school, a reserve and a street in Somerville may all be renamed because Blacks Camp is regarded as derogatory and offensive. Pictures: Gary Sissons

EVERYONE WINS IF THE SHIRE BECOMES MORE PROACTIVE Now is the time for positive cultural change. •

Ratepayers expect a focus on essential improvements and initiatives not negativity.

Incinerate non-recyclable rubbish converting it to energy and back into the electricity grid!

Double our green wedge/parklands and coastline – absorb French Island into the Shire!

We should feel proud, not hide away from being part of the Peninsula Shire.

The collective, cultural thinking that drives our Shire’s operations needs to be proactive.