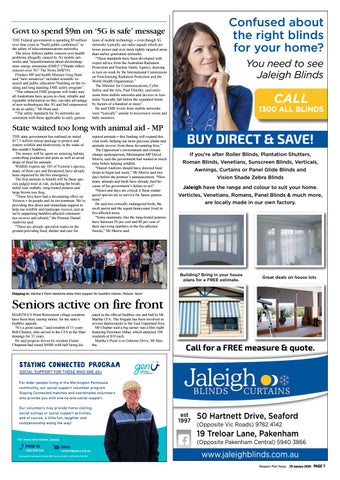 Govt to spend $9m on ‘5G is safe’ message THE Federal government is spending $9 million over four years to “build public confidence” in the safety of telecommunications networks. The move follows public concern over health problems allegedly caused by 5G mobile networks and “misinformation about electromagnetic energy emissions (EME)” (“Hands reflect concern over 5G” The News 26/8/19). Flinders MP and health Minister Greg Hunt said “new initiatives” included scientific research and public education “building on the existing and long standing EME safety program”. “The enhanced EME program will make sure all Australians have access to clear, reliable and reputable information so they can take advantage of new technologies like 5G and feel empowered to do so safely,” Mr Hunt said. “The safety standards for 5G networks are consistent with those applicable to early genera-

tions of mobile technology – even though 5G networks typically use radio signals which are lower power and over more tightly targeted areas than earlier generation networks. “These standards have been developed with expert advice from the Australian Radiation Protection and Nuclear Safety Agency, drawing in turn on work by the International Commission on Non-Ionising Radiation Protection and the World Health Organisation.” The Minister for Communications, Cyber Safety and the Arts, Paul Fletcher, said emissions from mobile networks and devices in Australia “typically fall below the regulated limits by factors of a hundred or more”. He said EME levels from mobile networks were “typically” similar to microwave ovens and baby monitors.

State waited too long with animal aid - MP THE state government has outlined an initial $17.5 million rescue package to protect and restore wildlife and biodiversity in the wake of this month’s bushfires. The money will be spent on restoring habitat, controlling predators and pests as well as aerial drops of food for animals. Wildlife experts say 185 of Victoria’s species, many of them rare and threatened, have already been impacted by the fire emergency. The first animals to benefit will be those species judged most at risk, including the brushtailed rock wallaby, long-footed potaroo and large brown tree frog. &quot;These fires have had a devastating effect on Victoria – its people and its environment. We’re providing this direct and immediate support to help our wildlife and landscape recover, just as we&#39;re supporting bushfire-affected communities recover and rebuild,” the Premier Daniel Andrews said. “There are already specialist teams on the ground providing food, shelter and care for

injured animals – this funding will expand this vital work, helping our most precious plants and animals recover from these devastating fires.” The Opposition’s environment and climate change spokesperson, Mornington MP David Morris, said the government had wasted to much time before helping wildlife. “Daniel Andrews should have directed food drops to begin last week,” Mr Morris said two days before the premier’s announcement. “How many animals and birds have already died because of his government’s failure to act? “Hours and days are critical if these endangered species are to survive for future generations.” He said two critically endangered birds, the swift parrot and the regent honeyeater lived in fire-affected areas. “Some mammals, like the long-footed potoroo have between 50 per cent and 80 per cent of their surviving numbers in the fire-affected forests,” Mr Morris said.

BUY DIRECT &amp; SAVE! If you&#39;re after Roller Blinds, Plantation Shutters, Roman Blinds, Venetians, Sunscreen Blinds, Verticals, Awnings, Curtains or Panel Glide Blinds and Vision Shade Zebra Blinds Jaleigh have the range and colour to suit your home. Verticles, Venetians, Romans, Panel Blinds &amp; much more, are locally made in our own factory.

Seniors active on fire front MARTHA’S Point Retirement village residents have been busy raising money for the state’s bushfire appeals. “It’s a great cause,” said resident of 11 years Bob Chanter, who served in the CFA in the Dandenongs for 35 years. He said projects driven by resident Elaine Chapman had raised $4000 with half being do-

nated to the official bushfire site and half to Mt Martha CFA. The brigade has been involved in several deployments to the East Gippsland fires. Mr Chanter said a big earner was a film night featuring Downton Abbey which attracted 100 residents at $10 each. Martha’s Point is in Osborne Drive, Mt Martha.

Staying Connected Program SOCIAL SUPPORT FOR THOSE WHO ARE 65+

For older people living in the Mornington Peninsula community, our social support volunteer program Staying Connected matches and coordinates volunteers who provide you with one-to-one social support. Our volunteers may provide home visiting, social outings or social support activities, and of course, a little fun, laughter and companionship along the way!