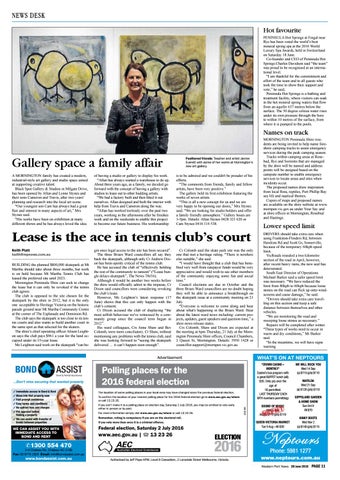 NEWS DESK Hot favourite PENINSULA Hot Springs at Fingal near Rye has been voted the world’s best mineral spring spa at the 2016 World Luxury Spa Awards, held in Switzerland on Saturday 18 June. Co-founder and CEO of Peninsula Hot Springs Charles Davidson said “the team” was proud to be recognised at an international level. “I am thankful for the commitment and effort of the team and to all guests who took the time to show their support and vote,” he said, Peninsula Hot Springs is a bathing and treatment facility, where visitors can soak in the hot mineral spring waters that flow from an aquifer 637 metres below the surface. The 50 degree celsius water rises under its own pressure through the bore to within 10 metres of the surface, from where it is pumped to the pools.

Gallery space a family affair A MORNINGTON family has created a modern, industrial-style art gallery and studio space aimed at supporting creative talent. Black Spot Gallery & Studios in Milgate Drive, has been opened by Allan and Lynne Stynes and their sons Cameron and Travis, after two years’ planning and research into the local art scene. “Our youngest son Cam has always had a great flair and interest in many aspects of art,” Mrs Stynes said. “His works have been on exhibition at many different shows and he has always loved the idea

of having a studio or gallery to display his work. “Allan has always wanted a warehouse to do up. About three years ago, as a family, we decided go forward with the concept of having a gallery with studios to lease out to other budding artists. “We had a factory built and then fitted it out ourselves. Allan designed and built the interior with help from Travis and Cameron along the way. “Allan has worked tirelessly over the past two years, working in the afternoons after he finishes work and on the weekends to enable this project to become our future business. His workmanship

Feathered friends: Teacher and artist Janine Everett with some of her works at Mornington’s new art gallery.

is to be admired and we couldn't be prouder of his efforts. “The comments from friends, family and fellow artists, have been very positive.” The gallery held its first exhibition featuring the works of seven artists. “This is all a new concept for us and we are very happy to be opening our doors,” Mrs Stynes said. “We are looking for studio holders and offer a family friendly atmosphere.” Gallery hours are 1-5pm. Details: Allan Stynes 0428 321 620 or Cam Stynes 0416 114 538.

Lease is the ace in tennis club’s court Keith Platt keith@mpnews.com.au BUILDING the planned $800,000 skatepark at Mt Martha should take about three months, but work is on hold because Mt Martha Tennis Club has leased the preferred site until 2023. Mornington Peninsula Shire can seek to change the lease but it can only be revoked if the tennis club agrees. The club is opposed to the site chosen for the skatepark by the shire in 2012, but it is the only one acceptable to Heritage Victoria on the historic parade ground near Mt Martha Community Centre at the corner of The Esplanade and Dominion Rd. The club says the skatepark is too close to its tennis courts and also wants to build another court in the same spot as that selected for the skaters. The shire’s chief operating officer Alison Leighton says the club pays $961 a year for the land occupied under its 15-year lease. Ms Leighton said work on the skatepark “can be-

gin once legal access to the site has been secured”. The three Briars Ward councillors all say they back the skatepark, although only Cr Andrew Dixon has been openly critical of the tennis club. He has accused the club of “effectively holding the rest of the community to ransom” (“Lease bungle delays skatepark”, The News 7/6/16). Although it would be another two weeks before the shire would officially admit to the impasse, Cr Dixon said councillors were considering revoking the club’s lease. However, Ms Leighton’s latest response (17 June) shows that this can only happen with the club’s consent. Cr Dixon accused the club of displaying “the most selfish behaviour we've witnessed by a community group since the council term began in 2012”. His ward colleagues, Crs Anne Shaw and Bev Colomb, were more conciliatory. Cr Shaw, without mentioning any problems with the tennis club, said she was looking forward to “seeing the skatepark delivered … it can’t happen soon enough”.

Cr Colomb said the skate park site was the only one that met a heritage ruling. “There is nowhere else suitable,” she said. “I would have thought that a club that has benefited very well from ratepayer funds would be very appreciative and would wish to see other members of the community enjoying some fun and social time.” Council elections are due in October and the three Briars Ward councillors are no doubt hoping they will be able to announce a breakthrough on the skatepark issue at a community meeting on 21 July. “Everyone is welcome to come along and hear about what's happening in the Briars Ward. Hear about the latest ward news including: current projects, updates, guest speakers and question time,” a shire news release states. Crs Colomb, Shaw and Dixon are expected at the meeting at 6pm Thursday, 21 July at the Mornington Peninsula Shire offices, Council Chambers, 2 Queen St, Mornington. Details: 5950 1428 or councillor.support@mornpen.vic.gov.au

DRIVERS should take extra care when using Frankston-Flinders Rd, between Hawkins Rd and Scott Gr, Somerville, because of the temporary 60kph speed limit. VicRoads resealed a two kilometre section of the road in April, however, after recent heavy rains, the new seal has deteriorated. South East Director of Operations Michael Barker said a safer speed limit was necessary. “We have reduced the limit from 80kph to 60kph because loose stones on the road can flick up onto windscreens and cause damage,” he said. “Drivers should take extra care travelling on this section and keep a safe distance between themselves and other vehicles. “We are monitoring the road and sweeping loose stones as necessary.” Repairs will be completed after winter. “These types of works need to occur in warm and dry conditions,” Mr Barker said. “In the meantime, we will have signs warning

*CROWN CASINO – MONTHLY* Casino’s bus program with a great BUFFET lunch (all) $35. Only p/p over the age of 18 permitted. LAST THURSDAY EACH MTH numbers permitting) GT21759

MORNINGTON Peninsula Shire residents are being invited to help name foreshore camping tracks to assist emergency services during the peak camping season. Tracks within camping areas at Rosebud, Rye and Sorrento that are managed by the shire will be named and address points will be assigned based on the campsite number to enable emergency services to locate areas and sites when incidents occur. The proposed names draw inspiration from local flora, reptiles, Port Phillip Bay sea life and nautical themes. Copies of maps and proposed names are available on the shire website at www. mornpen.vic.gov.au under Your Say and at shire offices in Mornington, Rosebud and Hastings.