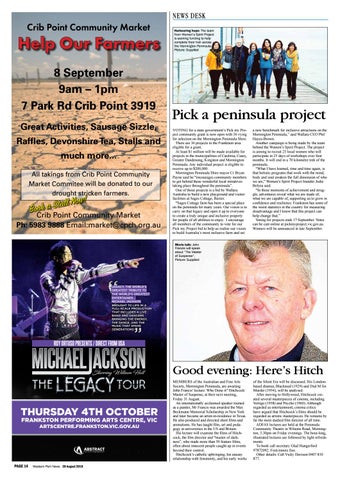 Harbouring hope: The team from Women’s Spirit Project is seeking funding to help complete their trek across the Mornington Peninsula. Picture: Supplied

Pick a peninsula project VOTING for a state government’s Pick my Project community grant is now open with 56 vying for selection on the Mornington Peninsula Shire. There are 36 projects in the Frankston area eligible for a grant. At least $1 million will be made available for projects in the municipalities of Cardinia, Casey, Greater Dandenong, Kingston and Mornington Peninsula. Any individual project is eligible to receive up to $200,000. Mornington Peninsula Shire mayor Cr Bryan Payne said he “encourages community members to get behind these wonderful local initiatives taking place throughout the peninsula”. One of those projects is a bid by Wallara Australia to build a new playground and visitor facilities at Sages Cottage, Baxter. “Sages Cottage farm has been a special place on the peninsula for many years. Our vision is to carry on that legacy and open it up to everyone to create a truly unique and inclusive property for people of all abilities to enjoy. I encourage all members of the community to vote for our Pick my Project bid to help us realise our vision to build Australia’s most inclusive farm and set

a new benchmark for inclusive attractions on the Mornington Peninsula,” said Wallara CEO Phil Hayes-Brown. Another campaign is being made by the team behind the Women’s Spirit Project. The project is aiming to recruit 25 local women who will participate in 25 days of workshops over four months. It will end in a 70 kilometre trek of the peninsula. “What I have learned, time and time again, is that holistic programs that work with the mind, body and soul awaken the full dimension of who we are,” Women’s Spirit Project founder Jodie Belyea said. “In those moments of achievement and struggle, adventures reveal what we are made of; what we are capable of, supporting us to grow in confidence and resilience. Frankston has some of the worst statistics in the country for measuring disadvantage and I know that this project can help change that.” Voting for projects ends 17 September. Votes can be cast online at pickmyproject.vic.gov.au. Winners will be announced in late September.

Movie talk: John Francis will speak about “The Master of Suspense”. Picture: Supplied

Good evening: Here’s Hitch MEMBERS of the Australian and Fine Arts Society, Mornington Peninsula, are awaiting John Francis’ lecture: Who Done it? Hitchcock: Master of Suspense, at their next meeting, Friday 31 August. An internationally acclaimed speaker trained as a painter, Mr Francis was awarded the Max Beckmann Memorial Scholarship in New York and later became an artist-in-residence in Texas. He also produced and directed short films and animations. He has taught film, art and pedagogy at universities in the US and Britain. His lecture will examine the films of Hitchcock, the film director and “master of darkness”, who made more than 50 feature films, often about innocent people caught up in events beyond their control. Hitchcock’s catholic upbringing, his uneasy relationship with femininity, and his early works

of the Silent Era will be discussed. His Londonbased dramas, Blackmail (1929) and Dial M for Murder (1954), will be analysed. After moving to Hollywood, Hitchcock created several masterpieces of cinema, including Vertigo (1958) and Psycho (1960). Although regarded as entertainment, cinema critics have argued that Hitchcock’s films should be regarded as artistic masterpieces. He remains by far the most studied film director of all time. ADFAS lectures are held at the Peninsula Community Theatre in Wilsons Road, Mornington, 5.30pm on Friday evenings. The hour-long, illustrated lectures are followed by light refreshments. To book call secretary Glad Hungerford 97872092. First-timers free. Other details: Call Vicky Davison 0407 810 877.