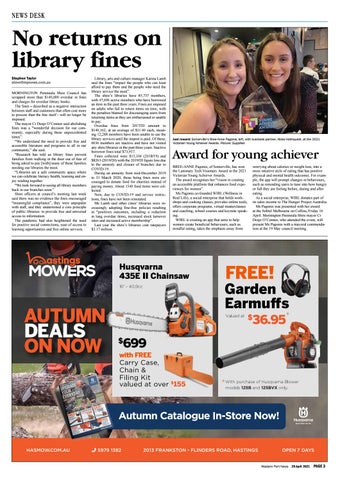 No returns on library fines Stephen Taylor steve@mpnews.com.au MORNINGTON Peninsula Shire Council has scrapped more than $140,000 overdue in fines and charges for overdue library books. The fines – described as a negative interaction between staff and customers that often cost more to process than the fine itself - will no longer be imposed. The mayor Cr Despi O’Connor said abolishing fines was a “wonderful decision for our community, especially during these unprecedented times”. “We understand the need to provide free and accessible literature and programs to all in our community,” she said. “Research has told us library fines prevent families from walking in the door out of fear of being asked to pay [with] many of those families needing our libraries the most. “Libraries are a safe community space where we can celebrate literacy health, learning and enjoy reading together. “We look forward to seeing all library members back in our branches soon.” Shire officers at council’s meeting last week said there was no evidence the fines encouraged “meaningful compliance”, they were unpopular with staff, and they undermined a core principle of public libraries: to provide free and universal access to information. The pandemic had also heightened the need for positive social connections, ease of access to learning opportunities and free online services.

Library, arts and culture manager Karina Lamb said the fines “impact the people who can least afford to pay them and the people who need the library service the most”. The shire’s libraries have 85,737 members, with 47,696 active members who have borrowed an item in the past three years. Fines are imposed on adults who fail to return items on time, with the penalties blamed for discouraging users from returning items as they are embarrassed or unable to pay. Overdue fines from 2017/20 amount to $140,162, at an average of $11.40 each, meaning 12,288 members have been unable to use the library services until the impost is paid. Of these, 6036 members are inactive and have not visited any shire libraries in the past three years. Inactive borrower fines total $73,917. Fines collected were $15,104 (2018/19) and $8263 (2019/20) with the 2019/20 figure less due to the amnesty and closure of branches due to COVID-19. During an amnesty from mid-December 2019 to 31 March 2020, those being fines were encouraged to donate food for charities instead of paying money. About 1540 food items were collected. Now, due to COVID-19 and service restrictions, fines have not been reinstated. Ms Lamb said other cities’ libraries were increasingly adopting fine-free policies resulting in “positives outcomes, including a reduction in long overdue items, increased stock turnover rates and increased active membership”. Last year the shire’s libraries cost ratepayers $3.17 million.

worrying about calories or weight loss, into a more intuitive style of eating that has positive physical and mental health outcomes. For example, the app will prompt changes in behaviours, such as reminding users to tune into how hungry or full they are feeling before, during and after eating. As a social enterprise, WIRL donates part of its sales income to The Hunger Project Australia. Ms Pagonis was presented with her award at the Sofitel Melbourne on Collins, Friday 16 April. Mornington Peninsula Shire mayor Cr Despi O’Connor, who attended the event, will present Ms Pagonis with a mayoral commendation at the 19 May council meeting.