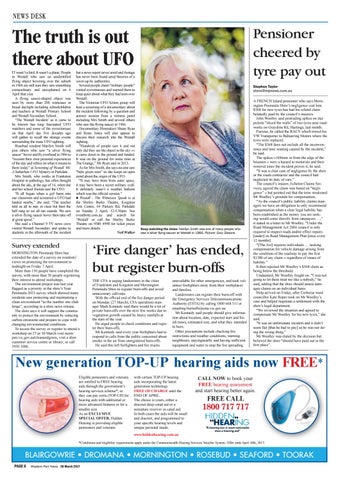 The truth is out there about UFO IT wasnâ&#x20AC;&#x2122;t a bird. It wasnâ&#x20AC;&#x2122;t a plane. People in Westall who saw an unidentified flying object hovering over the suburb in 1966 are still sure they saw something extraordinary and unexplained on 6 April that year. A flying saucer-shaped object was seen by more than 200 witnesses in broad daylight including schoolchildren and teachers at Westall Primary School and Westall Secondary School. â&#x20AC;&#x2DC;The Westall Incidentâ&#x20AC;&#x2122; as it came to be known has long fascinated UFO watchers and some of the eyewitnesses on that April day five decades ago will gather to recall the strange events surrounding the mass UFO sighting. Rosebud resident Marilyn Smith will join others who saw â&#x20AC;&#x153;a silver flying saucerâ&#x20AC;? hover and fly overhead in 1966 to â&#x20AC;&#x153;recount their own personal experiences of the day and reflect on what it means to them todayâ&#x20AC;? at Screening of Westall â&#x20AC;&#x2122;66: A Suburban UFO Mystery in Parkdale. Mrs Smith, who works at Frankston Hospital in pathology, has often thought about the day, at the age of 14, when she and her school friends saw the UFO. â&#x20AC;&#x153;It all began when a girl burst into our classroom and screamed a UFO had landed nearby,â&#x20AC;? she said. â&#x20AC;&#x153;The teacher told us all to stay in class but then the bell rang so we all ran outside. We saw a silver flying saucer hover then take off at great speed.â&#x20AC;? She said a Channel 9 TV news crew visited Westall Secondary and spoke to students in the aftermath of the incident

but a news report never aired and footage has never been found amid theories of a cover-up by authorities. Several people claim â&#x20AC;&#x153;military peopleâ&#x20AC;? visited eyewitnesses and warned them to keep quiet about what they had seen over Westall. The Victorian UFO Action group will host a screening of a documentary about the incident following by a question and answer session from a witness panel including Mrs Smith and several others who saw the flying saucer in 1966. Documentary filmmakers Shane Ryan and Rosie Jones will also appear to discuss their research into the Westall sighting. â&#x20AC;&#x153;Hundreds of people saw it and not only did they see the object in the sky â&#x20AC;&#x201D; it came down to the ground and landed. It was on the ground for some time at The Grange,â&#x20AC;? Mr Ryan said in 2013. As for Mrs Smith, she says no-one saw â&#x20AC;&#x153;little green menâ&#x20AC;? so she keeps an open mind about the origin of the UFO. â&#x20AC;&#x153;It may have been from outer space, it may have been a secret military craft. It definitely wasnâ&#x20AC;&#x2122;t a weather balloon which was the official version.â&#x20AC;? ď Ž Westall - The Witnesses Speak is at the Shirley Burke Theatre, Kingston Arts Centre, 64 Parkers Rd, Parkdale on Sunday 2 April, 12-5.30pm. See eventbrite.com.au and search for â&#x20AC;&#x2DC;Westallâ&#x20AC;&#x2122; or call the Shirley Burke Theatre on 9580 4998 for ticket prices and more details. Neil Walker

Survey extended MORNINGTON Peninsula Shire has extended the date of a survey on residentsâ&#x20AC;&#x2122; views on protecting the environment to midnight on Friday 7 April. More than 150 people have completed the survey, with more than 50 people registering their interest to attend workshops. The environment project was last year flagged as a priority in the shireâ&#x20AC;&#x2122;s Your Peninsula 2021 survey which showed many residents saw protecting and maintaining a clean environment â&#x20AC;&#x153;as the number one challengeâ&#x20AC;?, according to a shire news release. The shire says it will support the community to protect the environment by reducing carbon emissions and prepare to cope with changing environmental conditions. To access the survey or register to attend a workshop on 27 or 30 March visit mornpen.vic.gov.au/cleanandgreen, visit a shire customer service centre or library; or call 5950 1000.

Keep watching the skies: Marilyn Smith was one of many people who saw a silver flying saucer at Westall in 1966. Picture: Gary Sissons

â&#x20AC;&#x2DC;Fire dangerâ&#x20AC;&#x2122; has ended, but register burn-offs THE CFA is urging landowners in the cities of Frankston and Kingston and Mornington Peninsula Shire to register burn-offs and avoid unnecessary call-outs. With the official end of the fire danger period on Monday (27 March), CFA operations manager Mark Kennedy said there would be a lot of private burn-offs over the next few weeks due to vegetation growth caused by heavy rainfalls at the start of the year. He urged people to check conditions and register their burn-offs. Mr Kennedy said every year firefighters had to respond to calls from the public concerned about smoke in the air from unregistered burn-offs. He said this left firefighters and fire trucks

unavailable for other emergencies, and took volunteer firefighters away from their workplaces and families. Landowners can register their burn-off with the Emergency Services Telecommunications Authority (ESTA) by calling 1800 668 511 or emailing burnoffs@esta.vic.gov.au Mr Kennedy said people should give information about location, date, expected start and finish times, estimated size, and what they intended to burn. Other precautions include checking fire restrictions and weather conditions, warning neighbours, stayingnearby and having sufficient equipment and water to stop the fire spreading.

with certain TOP-UP hearing aids incorporating the latest generation technology FREE OF CHARGE until the END OF APRIL. The choice is yours, either a discreet deep canal aid or a miniature receiver in canal aid. In both cases the aids will be small and discreet, and programmed to \RXUVSHFLÂżFKHDULQJOHYHOVDQG unique personal needs. www.hiddenhearing.com.au