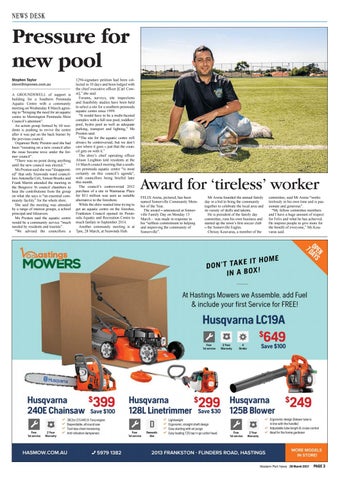 Pressure for new pool Stephen Taylor steve@mpnews.com.au A GROUNDSWELL of support is building for a Southern Peninsula Aquatic Centre with a community meeting on Wednesday 8 March agreeing to “bringing the need for an aquatic centre to Mornington Peninsula Shire Council’s attention”. An action group formed by 60 residents is pushing to revive the centre after it was put on the back burner by the previous council. Organiser Betty Preston said she had been “sweating on a new council after the issue became toxic under the former council”. “There was no point doing anything until the new council was elected.” Ms Preston said she was “disappointed” that only Seawinds ward councillors Antonella Celi, Simon Brooks and Frank Martin attended the meeting in the Besgrove St council chambers to hear the contributions from the group on what she says is “an essential community facility” for the whole shire. She said the meeting was attended by a range of interest groups, a school principal and lifesavers. Ms Preston said the aquatic centre would be a community service “much needed by residents and tourists”. “We advised the councillors a

1294-signature petition had been collected in 10 days and been lodged with the chief executive officer [Carl Cowie],” she said. Forums, surveys, site inspections and feasibility studies have been held to select a site for a southern peninsula aquatic centre since 1999. “It would have to be a multi-faceted complex with a full size pool, toddlers’ pool, hydro pool as well as adequate parking, transport and lighting,” Ms Preston said. “The site for the aquatic centre will always be controversial, but we don’t care where it goes – just that the council gets on with it.” The shire’s chief operating officer Alison Leighton told residents at the 14 March council meeting that a southern peninsula aquatic centre “is most certainly on this council’s agenda”, with councillors being briefed later this month. The council’s controversial 2012 purchase of a site in Wannaeue Place for $5.l million was seen as suitable alternative to the foreshore. While the shire wasted time trying to get an aquatic centre on the foreshor, Frankston Council opened its Peninsula Aquatic and Recreation Centre to much fanfare in September 2014. Another community meeting is at 7pm, 28 March, at Seawinds Hub.

Award for ‘tireless’ worker FELIX Arena, pictured, has been named Somerville Community Member of the Year. The award – announced at Somerville Family Day on Monday 13 March - was made in response to his “selfless commitment to helping and improving the community of Somerville”.

Mr Arena founded the annual family day in a bid to bring the community together to celebrate the local area and its variety of skills and talents. He is president of the family day committee, runs his own business and started up the town’s first soccer club – the Somerville Eagles. Chrissy Kouvaras, a member of the

committee, said Mr Arena “works tirelessly in his own time and is passionate and generous”. “My fellow committee members and I have a huge amount of respect for Felix and what he has achieved. He inspires people to give more for the benefit of everyone,” Ms Kouvaras said.