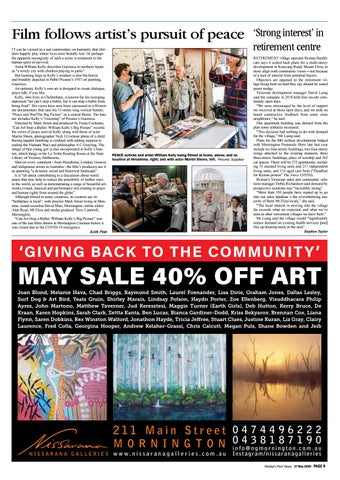 Film follows artist’s pursuit of peace IT can be viewed as a sad commentary on humanity that children happily play where lives were brutally lost. Or perhaps the apparent incongruity of such a scene is testament to the human spirit of survival. Artist William Kelly describes Guernica in northern Spain as “a lovely city with children playing in parks”. But looming large in Kelly’s mindset is also the horror and brutality depicted in Pablo Picasso’s 1937 oil painting, Guernica. An optimist, Kelly’s own art is designed to create dialogue, peace talk, if you like. Kelly, who lives in Cheltenham, is known for his sweeping statement “art can’t stop a bullet, but it can stop a bullet from being fired”. His views have now been canvassed in a 90-minute documentary that uses his 13-metre long vertical banner, "Peace and War/The Big Picture” as a central theme. The banner includes Kelly’s “visioning” of Picasso’s Guernica. Directed by Mark Street and produced by Fiona Cochrane, ”Can Art Stop a Bullet: William Kelly’s Big Picture” records the views of peace activist Kelly along with those of actor Martin Sheen, photographer Nick Ut (whose photo of a child fleeing napalm bombing is credited with adding impetus to ending the Vietnam War) and philosopher A C Grayling. The image of that young girl is also incorporated in Kelly’s banner, which hangs in the La Trobe Reading Room at the State Library of Victoria, Melbourne. Shot on every continent - from Hiroshima, London, Geneva and indigenous artists in Australia - the film’s producers see it as spanning “a dynamic social and historical landscape”. It is “all about contributing to a discussion about world peace that may help to reduce the possibility of further wars in the world, as well as demonstrating a range of beautiful artworks (visual, musical and performance art) relating to peace and human rights from around the globe”. Although filmed in many countries, its creators say its “birthplace is local”, with director Mark Street living in Mentone, sound recordist David Muir, Mornington, online editor Alan Ryan, Mt Eliza and media producer Terry Cantwell, Mornington. “Can Art Stop a Bullet: William Kelly’s Big Picture” was one of the last films shown at Mornington Cinemas before it was closed due to the COVID-19 emergency. Keith Platt

PEACE activist and artist William Kelly being filmed at home, above; and on location at Hiroshima, right; and with actor Martin Sheen, left. Pictures: Supplied

‘Strong interest’ in retirement centre RETIREMENT village operator Ryman Healthcare says it scaled back plans for a multi-storey development in Kunyung Road, Mount Eliza, to more align with community views – not because of a lack of interest from potential buyers. Objectors are opposed to the retirement village being built on land they say should be zoned green wedge. Victorian development manager David Laing said the company in 2018 held four on-site community open days. “We were encouraged by the level of support we received at those open days, and we took on board constructive feedback from some close neighbours,” he said. One apartment building was deleted from the plan some setbacks increased. “This decision had nothing to do with demand for the village,” Mr Laing said. Plans for the $80 million development lodged with Mornington Peninsula Shire late last year include six four-storey buildings, two four-storey wings attached to the existing mansion, three three-storey buildings, place of worship and 362 car spaces. There will be 272 apartments, including 55 assisted living units and 217 independent living units, and 124 aged care beds (“Deadline for Ryman protest” The News 12/5/20). Ryman’s Victorian sales and community relations manager Debra Richardson said demand by prospective residents was “incredibly strong”. “More than 350 people have signed up to go into our sales database – the overwhelming majority of them Mt Eliza locals,” she said. “The local interest in moving into the village far exceeds what we expected, and what we’ve seen at other retirement villages we have built.” Mr Laing said the village would “significantly reduce demand on existing health services [and] free up housing stock in the area”. Stephen Taylor

‘GIVING BACK TO THE COMMUNIT Y ’