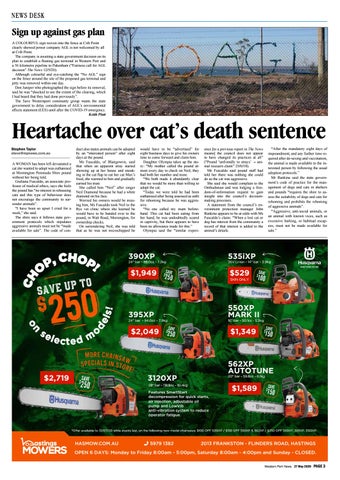 Sign up against gas plan A COLOURFUL sign woven into the fence at Crib Point clearly showed power company AGL is not welcomed by all at Crib Point. The company is awaiting a state government decision on its plan to establish a floating gas terminal in Western Port and a 56 kilometre pipeline to Pakenham (“Fairness call for AGL decision” The News 12/5/20). Although colourful and eye-catching the “No AGL” sign on the fence around the site of the proposed gas terminal and jetty was removed within one day. Don Juniper who photographed the sign before its removal, said he was “shocked to see the extent of the clearing, which I had heard that they had done previously”. The Save Westernport communty group wants the state government to delay consideration of AGL’s environmental effects statement (EES) until after the COVID-19 emergency. Keith Platt

Heartache over cat’s death sentence Stephen Taylor steve@mpnews.com.au A WOMAN has been left devastated a cat she wanted to adopt was euthanised at Mornington Peninsula Shire pound without her being told. Giuliana Fuscaldo, an associate professor of medical ethics, says she feels the pound has “no interest in rehousing cats and this type of behaviour does not encourage the community to surrender animals”. “I have been so upset I cried for a week,” she said. The shire says it follows state government protocols which stipulates aggressive animals must not be “made available for sale”. The code of con-

duct also states animals can be adopted by an “interested person” after eight days at the pound. Ms Fuscaldo, of Blairgowrie, said that when an apparent stray started showing up at her house and sneaking in the cat flap to eat her cat Max’s food, she warmed to him and gradually earned his trust. She called him “Neil” after singer Neil Diamond because he had a white diamond on his face. Worried his owners would be missing him, Ms Fuscaldo took Neil to the Rye vet clinic where she learned he would have to be handed over to the pound, in Watt Road, Mornington, for ownership checks. On surrendering Neil, she was told that as he was not microchipped he

would have to be “advertised” for eight business days to give his owners time to come forward and claim him. Daughter Olympia takes up the story: “My mother called the pound almost every day to check on Neil; they had both her number and mine. “We both made it abundantly clear that we would be more than willing to adopt the cat. “Today we were told he had been euthanised after being assessed as unfit for rehoming because he was aggressive. “No one called my mum beforehand. This cat had been eating from her hand; he was undoubtedly scared in captivity, but there appears to have been no allowance made for this.” Olympia said the “similar experi-

“After the mandatory eight days of impoundment, and any further time required after de-sexing and vaccination, the animal is made available to the interested person by following the usual adoption protocols.” Mr Rankine said the state government’s code of practice for the management of dogs and cats in shelters and pounds “requires the shire to assess the suitability of dogs and cats for rehoming and prohibits the rehoming of aggressive animals”. “Aggressive, anti-social animals, or an animal with known vices, such as excessive barking, or habitual escapees, must not be made available for sale.”

ence [to a previous report in The News means] the council does not appear to have changed its practices at all” (“Pound ‘unfriendly to strays’ – animal rescuers claim” 25/6/18). Ms Fuscaldo said pound staff had told her there was nothing she could do as the cat was aggressive. She said she would complain to the Ombudsman and was lodging a freedom-of-information request to gain insight into the council’s decisionmaking processes. A statement from the council’s environment protection manager John Rankine appears to be at odds with Ms Fuscaldo’s claim: “When a lost cat or dog has interest from the community a record of that interest is added to the animal’s details.