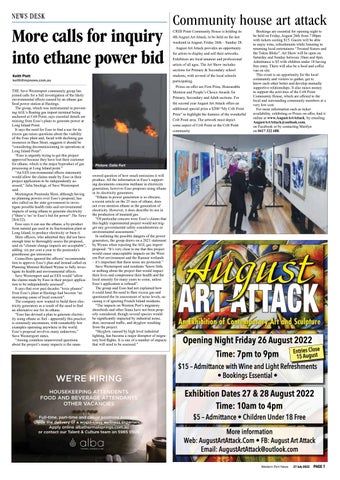 More calls for inquiry into ethane power bid Keith Platt keith@mpnews.com.au THE Save Westernport community group has joined calls for a full investigation of the likely environmental effects caused by an ethane gas fired power station at Hastings. The group, which was instrumental in preventing AGL’s floating gas import terminal being anchored at Crib Point, says essential details are missing from Esso’s plans to generate power at Long Island Point. It says the need for Esso to find a use for its excess gas raises questions about the viability of the Esso plant and, faced with declining gas resources in Bass Strait, suggests it should be “considering decommissioning its operations at Long Island Point”. “Esso is urgently trying to get this project approved because they have lost their customer for ethane, which is the major byproduct of gas processing at Long Island point.” “An EES (environmental effects statement) would allow the claims made by Esso in their project application to be independently assessed,” Julia Stockigt, of Save Westernport said. Mornington Peninsula Shire, although having no planning powers over Esso’s proposal, has also called on the state government to investigate possible health risks and environmental impacts of using ethane to generate electricity (“Shire’s ‘no’ to Esso’s bid for power” The News 28/6/22). Esso says it can use the ethane, a by-product from natural gas used at its fractionation plant at Long Island, to produce electricity or burn it. Shire officers, who admitted they did not have enough time to thoroughly assess the proposal, said its “climate change impacts are acceptable”, adding six per cent a year to the peninsula’s greenhouse gas emissions. Councillors ignored the officers’ recommendation to approve Esso’s plan and instead called on Planning Minister Richard Wynne to fully investigate its health and environmental effects. Save Westernport said an EES would “allow the claims made by Esso in their project application to be independently assessed”. It says that over past decades “toxic plumes” from Esso’s plant at Hastings had become “an increasing cause of local concern”. The company now wanted to build three electricity generators as a result of the need to find an alternative use for its ethane. “Esso has devised a plan to generate electricity using ethane as fuel - apparently this practice is extremely uncommon, with remarkably few examples operating anywhere in the world. Esso’s proposal involves many unknowns,” Save Westernport states. “Among countless unanswered questions about the project’s many impacts is the unan-

Community house art attack CRIB Point Community House is holding its 4th August Art Attack, to be held on the last weekend in August, Friday 26th – Sunday 28. August Art Attack provides an opportunity for artists to display and sell their artworks. Exhibitors are local amateur and professional artists of all ages. The Art Show includes sections for Primary &amp; Secondary school students, with several of the local schools participating. Prizes on offer are First Prize, Honourable Mention and People’s Choice Awards for Primary, Secondary and Adult sections. For the second year August Art Attack offers an additional special prize a $200 “My Crib Point Prize” to highlight the features of the wonderful Crib Point area. The artwork must depict some aspect of Crib Point or the Crib Point community

Bookings are essential for opening night to be held on Friday, August 26th from 7.00pm with tickets costing $15. Guests will be able to enjoy wine, refreshments while listening to returning local entertainers “Twisted Sisters and the Token Bloke”. Art Show will be open on Saturday and Sunday between 10am and 4pm. Admittance is $5 with children under 18 having free entry. There will also be a food and coffee van on site. This event is an opportunity for the local community and visitors to gather, get to know each other better and develop mutually supportive relationships. It also raises money to support the activities of the Crib Point Community House, which are offered to the local and surrounding community members at a very low cost. For more information such as ticket availability, exhibiting or Prizes on offer, find it online at www.AugustArtAttack, by emailing AugustArtAttack@outlook.com, on Facebook or by contacting Marilyn on 0417 322 688.

Picture: Celia Furt swered question of how much emissions it will produce. All the information in Esso’s supporting documents concerns methane in electricity generation, however Esso proposes using ethane in its electricity generators. “Ethane in power generation is so obscure, a recent article on the 25 uses of ethane, does not even mention ethane in the generation of electricity. However, it does describe its use in the production of mustard gas. “Of particular concern were Esso’s claims that this highly experimental project would not trigger any governmental safety considerations or environmental assessments.” In outlining the possible dangers of the power generators, the group draws on a 2021 statement by Wynne when rejecting the AGL gas import proposal: “It’s very clear to me that this project would cause unacceptable impacts on the Western Port environment and the Ramsar wetlands – it’s important that these areas are protected.” Save Westernport said residents “know little or nothing about the project that would impact their lives and compromise their health and the local amenity for many years to come, unless Esso’s application is refused”. The group said Esso had not explained how it could limit the need to flare excess gas and questioned the its assessment of noise levels, accusing it of ignoring French Island residents. “The impacts on Western Port’s migratory shorebirds and other fauna have not been properly considered, though several species would be significantly impacted by industrial noise, dust, increased traffic, and skyglow resulting from the project. “Skyglow, caused by high level industrial lighting, has become a major disruptor of migratory bird flights. It is one of a number of impacts that will need to be assessed.”