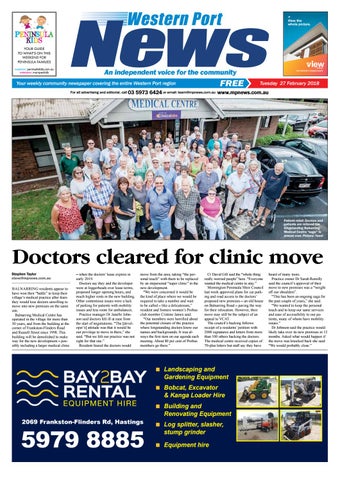 Doctors cleared for clinic move Stephen Taylor steve@mpnews.com.au BALNARRING residents appear to have won their “battle” to keep their village’s medical practice after fears they would lose doctors unwilling to move into new premises on the same site. Balnarring Medical Centre has operated in the village for more than 30 years, and from the building at the corner of Frankston-Flinders Road and Russell Street since 1998. This building will be demolished to make way for the new development – possibly including a larger medical clinic

– when the doctors’ lease expires in early 2019. Doctors say they and the developer were at loggerheads over lease terms, proposed longer opening hours, and much higher rents in the new building. Other contentious issues were a lack of parking for patients with mobility issues and less room for ambulances. Practice manager Dr Janelle Johnson said doctors felt ill at ease from the start of negotiations. “The [developer’s] attitude was that it would be our privilege to move in there,” she said. “But we felt our practice was not right for that site.” Resident feared the doctors would

move from the area, taking “the personal touch” with them to be replaced by an impersonal “super clinic” in the new development. “We were concerned it would be the kind of place where we would be required to take a number and wait to be called – like a delicatessen,” resident and Somers women’s Probus club member Cristine James said. “Our members were horrified about the potential closure of the practice where longstanding doctors know our names and backgrounds. It was always the first item on our agenda each meeting. About 80 per cent of Probus members go there.”

Cr David Gill said the “whole thing really worried people” here. “Everyone wanted the medical centre to stay.” Mornington Peninsula Shire Council last week approved plans for car parking and road access to the doctors’ proposed new premises – an old house on Balnarring Road – paving the way for their relocation. However, their move may still be the subject of an appeal to VCAT. The council’s backing follows receipt of a residents’ petition with 2000 signatures and letters from more than 100 others backing the doctors. The medical centre received copies of 70-plus letters but staff say they have

heard of many more. Practice owner Dr Sarah Romilly said the council’s approval of their move to new premises was a “weight off our shoulders”. “This has been an ongoing saga for the past couple of years,” she said. “We wanted to keep the personal touch and to keep our same services and ease of accessibility to our patients, many of whom have mobility issues.” Dr Johnson said the practice would likely take over its new premises in 12 months. Asked what would happen if the move was knocked back she said: “We would probably close.”