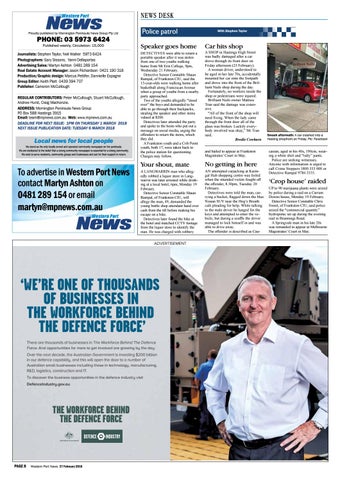 A SHOP in Hastings High Street was badly damaged after a car drove through its front door on Friday afternoon (23 February). A woman driver, understood to be aged in her late 70s, accidentally mounted her car onto the footpath and drove into the front of the Brilliant Nails shop during the day. Fortunately, no workers inside the shop or pedestrians were injured. Brilliant Nails owner Mattieu Tran said the damage was extensive. “All of the front of the shop will need fixing. When the lady came through the front door all of the glass was broken. Luckily everybody involved was okay,” Mr Tran said. Brodie Cowburn

DETECTIVES were able to return a portable speaker after it was stolen from one of two youths walking home from Mt Erin College, 9pm, Wednesday 21 February. Detective Senior Constable Shaun Rampal, of Frankston CIU, said the 15-year-olds were walking home after basketball along Franciscan Avenue when a group of youths from a nearby party approached. Two of the youths allegedly “stood over” the boys and demanded to be able to go through their backpacks, stealing the speaker and other items valued at $200. Detectives later attended the party and spoke to the hosts who put out a message on social media, urging the offenders to return the items, which they did. A Frankston youth and a Crib Point youth, both 17, were taken back to the police station for questioning. Charges may follow.

and bailed to appear at Frankston Magistrates’ Court in May.

No getting in here

A LANGWARRIN man who allegedly robbed a liquor store in Langwarrin was later arrested while drinking at a local hotel, 6pm, Monday 19 February. Detective Senior Constable Shaun Rampal, of Frankston CIU, will allege the man, 49, demanded the young bottle shop attendant hand over cash from the till before making his escape on a bike. Detectives later found the bike at the hotel and matched CCTV footage from the liquor store to identify the man. He was charged with robbery

AN attempted carjacking at Karingal Hub shopping centre was foiled when the intended victim fought off the offender, 8.30pm, Tuesday 20 February. Detectives were told the man, carrying a bucket, flagged down the blue Nissan SUV near the Hog’s Breath cafe pleading for help. While talking to the male driver he lunged for the keys and attempted to enter the vehicle, but during a scuffle the driver managed to lock himself in and was able to drive away. The offender is described as Cau-

THE WORKFORCE BEHIND THE DEFENCE FORCE

Smash aftermath: A car crashed into a Hasting shopfront on Friday. Pic: Facebook

‘Crop house’ raided UP to 90 marijuana plants were seized by police during a raid on a Carrum Downs house, Monday 19 February. Detective Senior Constable Chris Sweet, of Frankston CIU, said police seized the “commercial quantity” hydroponic set up during the evening raid in Brunnings Road. A Springvale man in his late 20s was remanded to appear at Melbourne Magistrates’ Court in May.