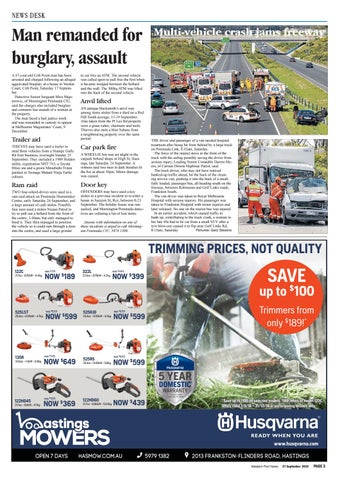 Man remanded for burglary, assault A 47-year-old Crib Point man has been arrested and charged following an alleged aggravated burglary at a house in Verdun Court, Crib Point, Saturday 17 September. Detective Senior Sergeant Miro Majstorovic, of Mornington Peninsula CIU, said the charges also included burglary and common law assault of a woman at the property. The man faced a bail justice week and was remanded in custody to appear at Melbourne Magistrates’ Court, 9 December.

to cut free an ATM. The second vehicle was called upon to pull free the first when it became wedged between the bollard and the wall. The 300kg ATM was lifted into the back of the second vehicle.

Anvil lifted AN antique blacksmith’s anvil was among items stolen from a shed on a Red Hill South acreage, 15-19 September. Also taken from the Pt Leo Rd property were a grass cutter, chainsaw and tools. Thieves also stole a blue Subaru from a neighbouring property over the same period.

TWO four-wheel-drives were used in a ram-raid attack on Peninsula Homemaker Centre, early Saturday 24 September, and a large amount of cash stolen. Possibly four men used a stolen Nissan Patrol to try to pull out a bollard from the front of the centre, 3.40am, but only managed to bend it. They then managed to position the vehicle so it could ram through a door into the centre, and used a large grinder

OFFENDERS may have used a key stolen in a previous incident to re-enter a house in Sarazen St, Rye, between 8-23 September. The holiday house was ransacked, and Mornington Peninsula detectives are collating a list of lost items.

A WHEELIE bin was set alight in the carpark behind shops in High St, Hastings, late Saturday 24 September. A witness said two men in dark hoodies lit the fire at about 10pm. Minor damage was caused.

Anyone with information on any of these incidents is urged to call Mornington Peninsula CIU, 5978 1300.

THE driver and passenger of a van needed hospital treatment after being hit from behind by a large truck on Peninsula Link, 8.45am, Saturday. The force of the impact stove in the front of the truck with the airbag possibly saving the driver from serious injury, Leading Senior Constable Darren Myers, of Carrum Downs Highway Patrol, said. The truck driver, who may not have noticed banked-up traffic ahead, hit the back of the cleaning service van, pushing it into the back of a small, fully loaded, passenger bus, all heading south on the freeway, between Robinsons and Golf Links roads, Frankston South. The van driver was taken to Royal Melbourne Hospital with serious injuries. His passenger was taken to Frankston Hospital with minor injuries and later released. No one on the tourist bus was injured. In an earlier accident, which caused traffic to bank up, contributing to the truck crash, a woman in her late 40s had to be cut from a small SUV after a tyre blow-out caused it to flip near Golf Links Rd, 8.15am, Saturday. Pictures: Gary Sissons