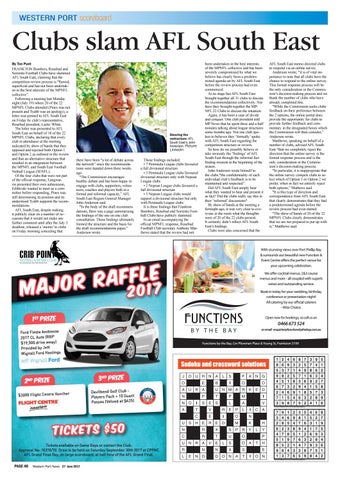 Clubs slam AFL South East By Toe Punt FRANKTON Bombers, Rosebud and Sorrento Football Clubs have slammed AFL South East, claiming that the competition review process is “flawed, superficial and has not been undertaken in the best interests of the MPNFL collective”. Following a meeting last Monday night (July 19) where 20 of the 22 MPNFL Clubs attended (Pines was not present and Tyabb was an apology), a letter was penned to AFL South East on Friday by club’s representative, Rosebud president, Lachy White. The letter was presented to AFL South East on behalf of 18 of the 22 MPNFL Clubs, declaring that every club in attendance at the meeting indicated by show of hands that they opposed and rejected both Option 1 and Option 2 as outlined in the review and that an alternative structure that resulted in an integration between the MPNFL and South East Football Netball League (SENFL). Of the four clubs that were not part of the official response, Langwarrin presented their own submission, Edithvale wanted to meet as a committee before responding, Pines was still determining its position and its understood Tyabb supports the recommendations. AFL South East, despite making it publicly clear on a number of occasions that it would not make any further comment until after the July 3 deadline, released a ‘memo’ to clubs on Friday morning conceding that

Linkedin there have been “a lot of debate across the network” since the recommendations were handed down three weeks ago. “The Commission encourages healthy debate and has been happy to engage with clubs, supporters, volunteers, coaches and players both in a formal and informal capacity,” AFL South East Region General Manager John Anderson said. “In the body of the draft recommendations, there was a page summarising the findings of the one on one club consultation. Those findings ultimately formed the structure and the basis for the draft recommendations paper,” Anderson wrote.

AFL South East memo directed clubs to respond via an online survey. Anderson wrote; “it is of vital importance to note that all clubs have the chance to respond to the online survey. This formal response process will be the only consideration in the Commission’s decision-making process and we thank the number of clubs who have already completed this. “While the Commission seeks clubs feedback on their preference between the 2 options, the online portal does provide the opportunity for clubs to provide further feedback and commentary in the designated boxes which the Commission will then consider,” Anderson wrote. Matthews, speaking on behalf of a number of clubs, advised AFL South East “that we completely reject the direction that the online survey is the formal response process and is the only consideration in the Commission’s decision-making process. “In particular, it is inappropriate that the online survey compels clubs to select which of Option 1 or Option 2 we prefer, when in fact we entirely reject both options,” Mathews said. “It is this type of direction and correspondence from AFL South East that clearly demonstrates that they had a predetermined agenda before the review process had even started. “The show of hands of 20 of the 22 MPNFL Clubs clearly demonstrates that we are not prepared to put up with it,” Matthews said.

been undertaken in the best interests of the MPNFL collective and has been severely compromised by what we believe has clearly been a predetermined agenda set by AFL South East before the review process had even commenced. At no stage has AFL South East brought together all 31 clubs to discuss the recommendations collectively. Nor have they brought together the MPNFL 22 Clubs to discuss the situation. Again, it has been a case of divide and conquer. One club president told MP News that he spent three and a half minutes talking about league structures some months ago. Not one club spoken to believes they ‘formally’ spoke with AFL South East regarding the competition structure or review. So how do we possibly believe or take seriously the ‘findings’ of AFL South East through the informal fact finding mission at the beginning of the season. John Anderson wrote himself to the clubs “the confidentiality of each individual club’s feedback is to be maintained and respected”. Did AFL South East simply hear what they wanted to hear and present it as fact? Did the clubs really say this in their ‘informal’ discussions? By show of hands at the meeting a fortnight ago, it was very clear to everyone in the room what the thoughts were of 20 of the 22 clubs present. It certainly didn’t reflect AFL South East’s findings. Clubs were also concerned that the