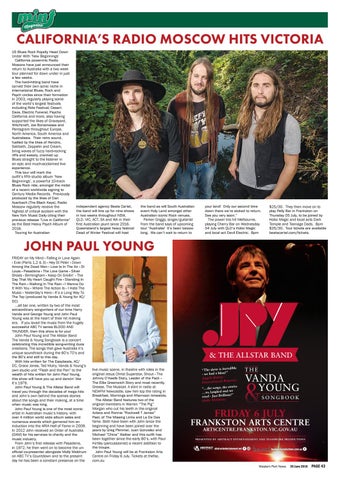 CALIFORNIA’S RADIO MOSCOW HITS VICTORIA US Blues Rock Royalty Head Down Under With ‘New Beginnings’ California power-trio Radio Moscow have just announced their return to Australia with a two week tour planned for down under in just a few weeks. The hard-hitting band have carved their own sonic niche in international Blues, Rock and Psych circles since their formation in 2003, regularly playing some of the world’s largest festivals including Ride Festival, Desert Daze, Electric Funeral, Psycho California and more, also having supported the likes of Graveyard, Witchcraft, Joe Bonamassa and Pentagram throughout Europe, North America, South America and Australasia. Their retro sound, fuelled by the likes of Hendrix, Sabbath, Zeppelin and Cream, bring waves of fuzzy hard-rocking riffs and sweaty, cranked up Blues straight to the listener in an epic and much-acclaimed live experience. This tour will mark the outfit’s fifth studio album ‘New Beginnings’, a powerful 10-track Blues Rock ride, amongst the midst of a recent worldwide signing to Century Media Records. Previously produced by the likes of Dan Auerbach (The Black Keys), Radio Moscow regularly receive the highest of critical acclaim with the New York Music Daily citing their previous release “Live in California” as the Best Heavy Psych Album of 2016. Touring for Australian

independent agency Beats Cartel, the band will line up for nine shows in two weeks throughout NSW, QLD, VIC, ACT, SA and WA in their first Australian jaunt since 2016. Queensland’s largest heavy festival Dead of Winter Festival will host

the band as will South Australian event Holy Land amongst other Australian iconic Rock venues. Parker Griggs, singer/guitarist from the band says of upcoming tour “Australia! It’s been tooooo long. We can’t wait to return to

$25/30. They then move on to play Pelly Bar in Frankston on Thursday 05 July, to be joined by Hobo Magic and local acts Dark Temple and Teenage Dads. 8pm $25/30. Tour tickets are available beatscartel.com/tickets.

JOHN PAUL YOUNG FRIDAY on My Mind - Falling in Love Again - Evie (Parts 1,2 & 3) - Hey St Peter - Down Among the Dead Men - Love Is In The Air - St Louis - Pasadena - The Love Game - Silver Shoes - Birmingham - Keep On Smilin’ - The Day That My Heart Caught Fire - Standing In The Rain - Walking In The Rain - I Wanna Do It With You - Where The Action Is - I Hate The Music - Yesterday’s Hero - It’s a Long Way To The Top (produced by Vanda & Young for AC/ DC) ...all bar one, written by two of the most extraordinary songwriters of our time Harry Vanda and George Young and John Paul Young was at the heart of their hit making era. If you loved the music from the hugely successful ABC TV series BLOOD AND THUNDER, then this show is for you! John Paul Young and The Allstar Band The Vanda & Young Songbook is a concert celebrating this incredible song-writing duos creations; The songs that gave Australia it’s unique soundtrack during the 60’s 70’s and the 80’s and still to this day. With hits written for The Easybeats, AC/ DC, Grace Jones, Ted Mulry, Vanda & Young’s own studio unit “Flash and the Pan” to the wealth of hits written for John Paul Young, this show will have you up and dancin’ like it’s 1979. John Paul Young & The Allstar Band will travel you through the decades of mega hits and John’s own behind the scenes stories about the songs and their making, at a time when music was king. John Paul Young is one of the most iconic artist in Australian music’s history, with over 4 million world wide album sales and numerous awards which garnered him an induction into the ARIA Hall of Fame in 2009. In 2012 John received an Order of Australia (OAM) for his services to charity and the music industry. From John’s first release with Pasadena, in 1972, he then went on to become the unofficial co-presenter alongside Molly Meldrum on ABC TV’s Countdown and to the present day he has been a constant presence on the

& THE ALLSTAR BAND live music scene, in theatre with roles in the original Jesus Christ Superstar, Shout - The Johnny O’Keefe Story, Leader of the Pack The Ellie Greenwich Story and most recently, Grease, The Musical. A stint in radio at NEWFM Newcastle, saw him top the rating in Breakfast, Mornings and Afternoon timeslots. The Allstar Band features two of the original members in Warren “The Pig” Morgan who cut his teeth in the original Aztecs and Ronnie “Rockwell T James” Peel, of The Missing Links and La De Das fame. Both have been with John since the beginning and have been joined over the years by Greg Plimmer, Juan Gonzalez and Michael “China” Walker and this outfit has been together since the early 80’s, with Paul Kirtley (percussionist) a recent addition to the troupe. John Paul Young will be at Frankston Arts Centre on Friday 6 July. Tickets at thefac. com.au

redible “The show is inc - we had a blast!” Angela Bishop porter. Entertainment Re stories “…the songs, the we d an …we laughed t!” an illi Br st Ju ed cri m. ru eld Molly M