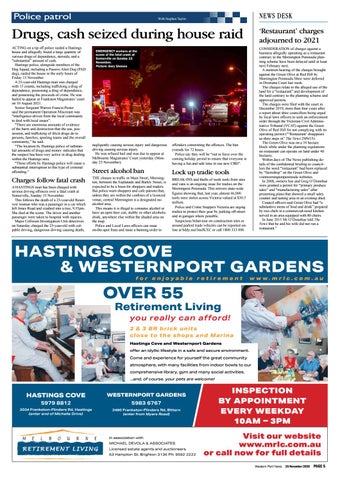 ACTING on a tip off police raided a Hastings house and allegedly found a large quantity of various drugs of dependence, steroids, and a “substantial” amount of cash. Hastings police, alongside members of the Dog Squad, including a Passive Alert Dog (PAD dog), raided the house in the early hours of Friday 13 November. A 25-year-old Hastings man was charged with 15 counts, including trafficking a drug of dependence, possessing a drug of dependence, and possessing the proceeds of crime. He was bailed to appear at Frankston Magistrates’ court on 10 August 2021. Senior Sergeant Warren Francis-Pester said the permanent Operation Miscreant was “intelligence-driven from the local community to deal with local issues”. “There are enormous amounts of evidence of the harm and destruction that the use, possession, and trafficking of illicit drugs do to persons, families, sporting teams and the overall community,” he said. “The location by Hastings police of substantial amounts of drugs and money indicates that the suspect has been very active in drug dealing within the Hastings area. “These efforts by Hastings police will cause a substantial interruption to this type of criminal offending.”

CONSIDERATION of charges against a business allegedly operating as a restaurant contrary to the Mornington Peninsula planning scheme have been delayed until at least next February next. A mention hearing of the charges brought against the Green Olive at Red Hill by Mornington Peninsula Shire were deferred in Dromana Court last week. The charges relate to the alleged use of the land for a “restaurant” and development of the land contrary to the planning scheme and approved permits. The charges were filed with the court in December 2019, more than four years after a report about shire councillors being urged by local laws officers to seek an enforcement order through the Victorian Civil Administrative Tribunal (VCAT) against the Green Olive of Red Hill for not complying with its operating permit (“‘Restaurant’ disappears as shire steps in” The News 29/6/15). The Green Olive was on a 10 hectare block while under the planning regulations no restaurant can operate on land under 40 hectares. Within days of The News publishing details of the confidential briefing to councillors the word “restaurant” had been replaced by “farmshop” on the Green Olive and visitmorningtonpeninsula websites. In 2008, owners Sue and Greg O’Donohue were granted a permit for “primary produce sales” and “manufacturing sales” after presenting plans that showed a small sales counter and tasting area in an existing shed. Council officers said Green Olive had “a substantive menu of food and drink” prepared by two chefs in a commercial-sized kitchen served in an area equipped with 80 chairs. In June 2015 Mr O’Donohue told The News that he and his wife did not run a restaurant.”

Charges follow fatal crash A HASTINGS man has been charged with serious driving offences over a fatal crash at Somerville, Sunday 15 November. This follows the death of a 23-year-old Reservoir woman who was a passenger in a car which left Jones Road and crashed into a tree, 9.55pm. She died at the scene. The driver and another passenger were taken to hospital with injuries. Major Collision Investigation Unit detectives on Saturday charged the 25-year-old with culpable driving, dangerous driving causing death,

EMERGENCY workers at the scene of the fatal crash at Somerville on Sunday 15 November. Picture: Gary Sissons

offenders committing the offences. The ban extends for 72 hours. Police say they will be “out in force over the coming holiday period to ensure that everyone is having a fun and safe time in our new CBD”.

THE closure to traffic in Main Street, Mornington, between the Esplanade and Barkly Street, is expected to be a boon for shoppers and traders. But police warn shoppers and cafe patrons that, unless they are within the confines of a licenced venue, central Mornington is a designated noalcohol area. This means it is illegal to consume alcohol or have an open beer can, stubby or other alcoholic drink, anywhere else within the shaded area on the map. Police and Local Laws officers can issue on-the-spot fines and issue a banning order to

BREAK-INS and thefts of work tools from utes and vans is an ongoing issue for tradies on the Mornington Peninsula. This mirrors state-wide figures showing that, last year, almost 46,000 tools were stolen across Victoria valued at $30.5 million. Police and Crime Stoppers Victoria are urging tradies to protect their gear by parking off-street and in garages where possible. Suspicious behaviour on construction sites or around parked trade vehicles can be reported online at bddy.me/3nsJKXC or call 1800 333 000.

Retirement Living you really can afford! 2 &amp; 3 BR bri c k uni ts c l ose to the shops a nd M ar ina Hastings Cove and Westernport Gardens offer an idyllic lifestyle in a safe and secure environment. Come and experience for yourself the great community atmosphere, with many facilities from indoor bowls to our comprehensive library, gym and many social activities. ...and, of course. your pets are welcome!

INSPECTION BY APPOINTMENT EVERY WEEKDAY 10AM – 3PM Visit our website www.mrlc.com.au or call now for full details Western Port News