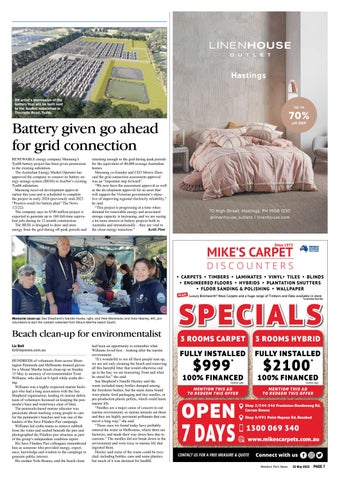 Hastings AN artist’s impression of the battery that will be built next to the AusNet substation in Thornells Road, Tyabb.

Battery given go ahead for grid connection RENEWABLE energy company Maoneng’s Tyabb battery project has been given permission to the existing substation. The Australian Energy Market Operator has approved the company to connect its battery energy storage system (BESS) to AusNet’s existing Tyabb substation. Maoneng received development approval earlier this year and is scheduled to complete the project in early 2024 (previously mid-2023 “Positive result for battery plan” The News 1/2/22). The company says its $190 million project is expected to generate up to 160 full-time equivalent jobs during its 12-month construction. The BESS is designed to draw and store energy from the grid during off-peak periods and

returning enough to the grid during peak periods for the equivalent of 40,000 average Australian homes. Maoneng co-founder and CEO Morris Zhou said the grid connection assessment approval was an “important step forward”. “We now have the assessment approval as well as the development approval for an asset that will support the Victorian government’s objective of improving regional electricity reliability,” he said. “This project is progressing at a time when demand for renewable energy and associated storage capacity is increasing, and we are seeing a lot more interest in battery projects both in Australia and internationally – they are vital to the clean energy transition.” Keith Platt

Beach clean-up for environmentalist Liz Bell liz@mpnews.com.au HUNDREDS of volunteers from across Mornington Peninsula and Melbourne donned gloves for a Mount Martha beach clean-up on Sunday 15 May in memory of environmentalist Trent Williams, who died on 9 April while scuba diving. Williams was a highly respected marine biologist who had a long association with the Sea Shepherd organisation, leading its marine debris team of volunteers focussed on keeping the peninsula’s bays and waterways clear of litter. The peninsula-based marine educator was passionate about teaching young people to care for the peninsula’s beaches and was one of the leaders of the Save Flinders Pier campaign. Williams led scuba teams to remove rubbish from the water and seabed beneath the pier and photographed the Flinders pier structure as part of the group’s independent condition report. His Save Flinders Pier colleagues remembered him as someone who provided energy, experience, knowledge and wisdom to the campaign to generate public interest. His mother Nola Heaney said the beach clean

had been an opportunity to remember what Williams loved best – looking after the marine environment. “It’s wonderful to see all these people turn up, we are not only cleaning the beach and removing all this harmful litter that would otherwise end up in the bay, we are honouring Trent and what he stood for,” she said. Sea Shepherd’s Narelle Huxley said the waste included many bottles dumped among the foreshore bushes, but the main items found were plastic food packaging and tiny nurdles, or pre-production plastic pellets, which could harm marine life. “Nurdles are a major cause of concern to out marine environment, as marine animals eat them and they are highly persistent pollutants that can travel a long way,” she said. “These ones we found today have probably entered the water in Melbourne, where there are factories, and made their way down here due to currents.” The nurdles did not break down in the environment and were toxic to marine life that ingested them. Huxley said some of the waste could be recycled, including bottles, cans and some plastics, but much of it was destined for landfill.

Connect with us Western Port News